let me just preface this story with the fact that i love my mother.

remember that as i tell you a tale of how i spent my new year’s day, k?

but first, a few things.

one. i am my mother’s only child. but you would have no trouble knowing that upon stepping foot inside my parents’ home. i, mean, it’s nothing crazy, just a few [hundred] solo-shots of yours truly plastered on the walls of almost every room in the house. you know, tasteful. so needless to say, after 26 years behind the camera, i’ve all but become accustomed to not only posing for photos in general, but more importantly, pausing for photos sans accompaniment. because without siblings perpetually on hand to stand with while mugging for the camera, you become quite well-trained in perfecting the “solo-shot.” oh you don’t know about the “solo-shot?” it’s kind of the unofficial gift given to only children; the ability to not look completely awkward when photographed alone. mostly for the fact that you know what to do with your hands. in fact i like to think there are four varying options of what to do with said appendages with regards to acceptable poses: there’s the one hand on the hip (better known as “the skinny arm” to most of the female population), or if you’re feeling really sassy, the both hands on the hips, followed by hands clasped behind the back (usually only resorted to when you’re carrying something like a purse or shopping bag) and finally the laid-back arms dangling at the sides slash head slightly cocked to the right or left (your choice) combo. there are certainly other options, but i’m pretty sure that most of the photos on the walls of my childhood home feature me alternating between one of the aforementioned poses.

two. if my mother wasn’t already a photog for the first 25 years of my life, over this past year especially she’s been bitten by quite the the shutter bug (ha!). her simple point and shoot has been replaced by a fancy schmancy lens and instead of reserving snapshots for special occasions such as birthday parties and anniversaries, photo shoots are completely acceptable on any day that ends in “y.” because every moment is an opportunity to perfect her craft. and well, i must say, those chance strolls along swami’s beach or day trips to san ysidro ranch have produced some breathtaking photographs. she’s talented, y’all.

which brings me to three. the result of parts one and two. what do you do when you’re a budding photographer and you have a daughter who has years of “solo shot”-taking expertise under her belt? i think you see where this is going…you continue to “perfect your craft” by guilting, i mean, graciously asking your loving and supportive daughter (who you politely remind that you brought into this world and can take her right out of), that she should be the subject of your next photo shoot.

and because i am in fact that loving and supportive daughter, i oblige.

as was the case this sunday. new year’s day. when the weather was all but too perfect to warrant another minute inside, and because well, i was having a good hair day, too.

so off we went toward the coast, en route to the self-realization fellowship center in downtown encinitas. no, not for a little self-realization (those i suppose it would have been nice to have a moment of reflection on the first day of a new year), but because the center boasts gorgeous gardens open to those not currently subscribing to the srf lifestyle. gardens which, you guessed it, would be the perfect backdrop for a little camera mugging.

now again, as a seasoned solo-shot veteran, i have become accustomed to taking many a photo in public settings. while at dinner at a fancy restaurant, in front of [insert famous landmark here], even on a mountain top upon the heels of a strenuous hike. but despite the fact that the self-realization fellowship center’s gardens are indeed open to the fine public citizens of north county san diego, i’m not gonna lie, this sunday’s photo shoot may have been one of my more awkward to date.

there was just something a bit un-kosher about posing on a bench nestled amongst aubergine blooms and overgrown moss while the gentleman beside me was getting his namaste on. but then i thought, wwtd -what would tyra do? and well, i believe i’ve watched enough seasons of america’s next top model to know that she would simply “smize through the pain” or in my instance, “smize through the awkwardness and rogue stares from your fellow meditating encinitans.” so that’s what i did. i climbed over babbling brooks and balanced on precariously positioned decorative stones all in the name of “perfecting my mother’s craft.”

and despite feeling very much aware of the fact that we had all but staged our own version of glamour shots right in the middle of this, what some would consider, sacred place of contemplation and worship, i let my inhibitions go and just enjoyed the time i had to spend with my very best friend. i humored her, of course, offering my best “come hither” stares into the camera’s lens. but not to ever take myself that seriously, i quickly followed up those serious shots with faces ridden with nose wrinkles, fish lips and pure unadulterated laughter. so much laughter (but quietly, of course, there were people meditating, remember?).

and when she had decided that my solo-shot count had reached an acceptable number, we scampered out of the gardens and back to the car.

and once we returned home, i positioned myself once more behind the laptop; the place i had already spent most of my new year’s weekend and she, to the upstairs computer to download her handiwork. and in a matter of moments, our scandalous (i know, we’re living pretty crazy lives if taking photos in the self-realization fellowship center’s gardens qualifies as “scandalous”) afternoon was all but forgotten.

until i heard a voice call down from the second floor. “hey, can you come up here?” she inquired.

i climbed the stairs and took a seat on the couch adjacent to the computer, bracing myself for what the contents of the screen would reveal. and then there i was. about 200 of me. mostly head shots. with varying expressions. and while i felt a bit silly (and vain) analyzing each and every photograph as they whizzed by in a shawna slide show, i couldn’t help but take a moment to float above myself and take the role of objective observer.

that afternoon had been so much more than an opportunity to take a simple photograph. to freeze a moment in time on a beautiful january day. “to perfect her craft.” it was the product of two best gals making a memory. a mother wanting to savor one more minute with her ever-growing, ever-maturing (here’s hoping!), ever-becoming-more -independent daughter before she’s one day too busy to spare a minute at all.

and a daughter who was,

all but happy to give it to her.

as that objective observer, of course.

they weren’t half bad.

and chance are, if you ever get the invite to my childhood home (and lucky you if you do!), you’re bound to see one or twenty of those pics on a wall somewhere. because like i said,

you would never know i’m my mother’s only child.

other than the fact that we’re the spitting image of each other as evidenced by this photograph. 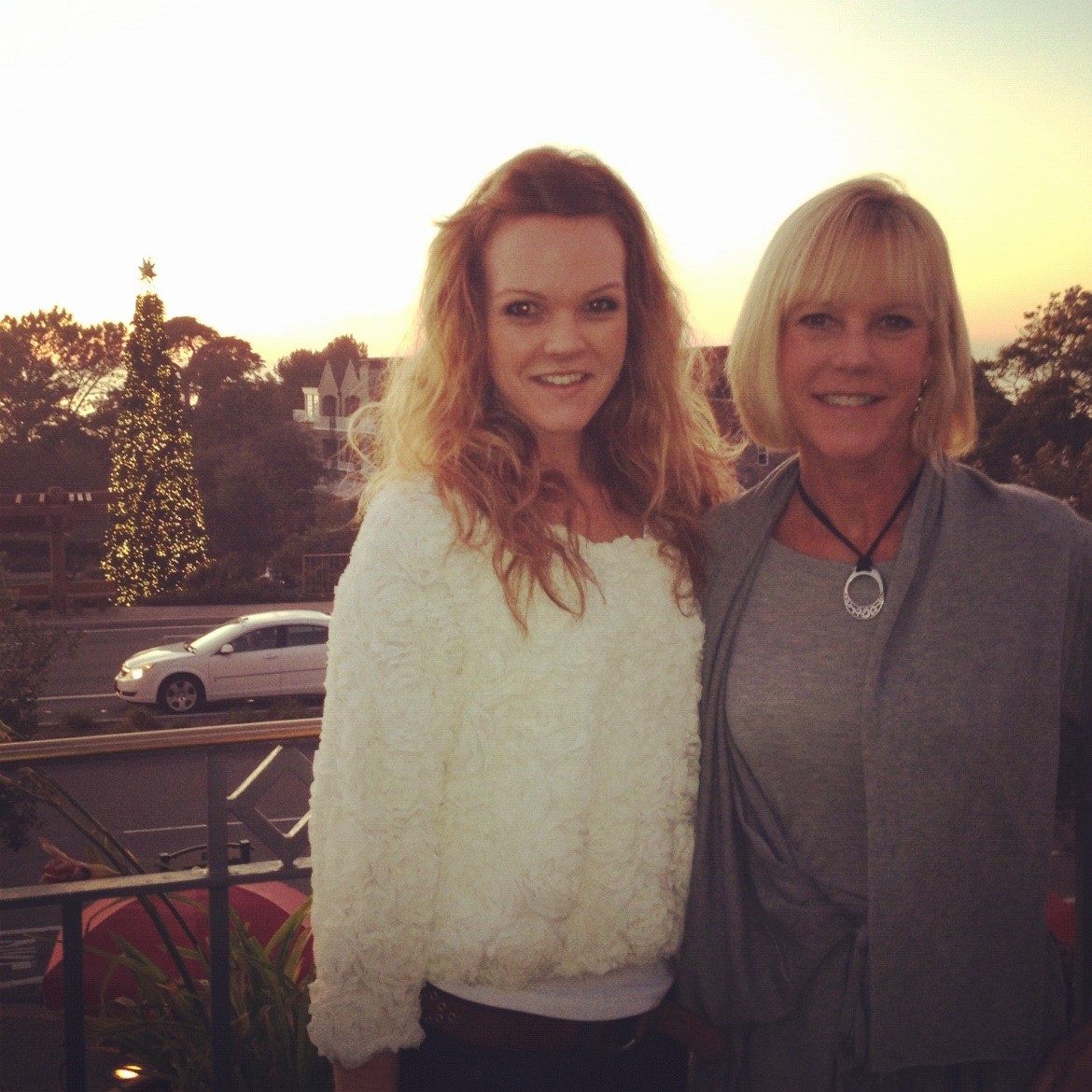 which was also taken on new year’s day. at sunset. at the plaza before a delicious dinner at pacifica del mar. the perfect ending to a perfect day spent “perfecting my mother’s craft.”