i stand (firmly) behind the belief that you can never truly rule out an article of clothing until you try it on.

i almost passed up my senior year homecoming dress by not following this advice. but lucky for me, i told that little voice inside my head screaming, “nah, it’s kind of a funky color,” to “callate” (that’s spanish for shut it), tried it on, fell in love, and purchased it with pride.

further solidifying the fact that you really can’t judge a garment on the hanger (just like a book by its cover). before really ruling it out as a possible addition to your wardrobe, one must make a date with the dressing room. especially if the article of clothing is on sale. because that just ups the ante.

so keeping this in mind, as i was perusing the sale racks at my beloved anthropologie two weekends ago, i couldn’t help but be completely mesmerized by a beautiful pair of turquoise silk wide leg trousers. and when i say wide leg, i mean “holy palazzo, princess jasmine called and wants her pants back” wide leg. but the hue was striking and i like aladdin, and hello, they were TWENTY DOLLARS so i searched for my size, whispered a few “huh, why not?!”‘s and ventured into the back.

truth be told, the aquamarine-colored bottoms did not come in my size, so i ended up bringing their white-colored cousin into the room with me instead. i figured if i absolutely had to have them, perhaps a store nearby could appease my need by sending my size in turquoise over to the carlsbad location. as i slipped my legs into the billowy pantaloons, i couldn’t help but feel a tad bit giddy. oh you don’t get giddy over trying on clothes? trust me, it’s possible. maybe you just aren’t buying the right clothes…anywho, i pulled them up over my bootylicious and zipped them up tight. and then i stood back to admire them in all of their wide leg glory. and they were awesome. the only problem being, well, as is the case with many a pair of white trousers, they were completely see-through. like “hey world, here are my lady parts on display for y’all to see (you’re welcome)” sheer. and i don’t think a good pair of nude undergarments would have improved matters; i would have had to wear full-body nude-colored leggings to ensure that i wasn’t cited for indecent exposure while out on the town.

“bummer!” i cried. but seeing as i’m no quitter, as i left the dressing room and handed the attendee my “no” pile, i was careful to refrain from returning my white palazzos just yet. in fact, i went one step further and inquired if, by sweet sweet chance, they had my beloved turquoised-version in my size in their super secret stash in back. and after disappearing for more than a moment, the lovely blonde returned victorious -turquoise trousers in hand! the only rub was that they were one size too big. but knowing that a tailor is a gal’s best friend (in addition to her other best friends, her starbuck’s barista and her dvr), i gladly accepted her find and threw them onto my “yes” pile (shocker, it was much larger than my “no” pile! darn you, anthro). seeing as i usually need a second opinion about clothing (not always, but sometimes it’s just nice to have another set of objective eyes to either affirm or oppose your pending purchases), i took my stash to the register and inquired if they could hold the items until the following evening. they were happy to oblige and i left feeling hopeful that a new day, as well as a fresh set of eyes (those of one fabulous mommacita) would make whittling down the pile a bit easier.

the following afternoon, i met my mother in the anthro dressing rooms for a little make-shift fashion show. and after modeling the skirts (seen here & here) and a pair of orange pants (you’re bound to see them soon, just as soon as i pick them up from the tailor’s) all of which received a “two-thumbs up/all-systems-go” approval from my not-so-objective party (“everything looks good on you!” that’s not helping my pocket book, momma), i finally reached for the palazzos. the turquoise ones, of course. i pulled them on; they were just as awesome as they had been a mere 12 hours before. the only problem being that like their lighter-hued counter parts, they, too were quite see-through. and though they boasted a larger size, they simply didn’t sit as well on my hippity hips as the white ones had. so for those reasons and a few more (silk pants, shawna? try keeping those wrinkle-free and sans stains), i finally faced the music. despite their twenty-dollar price tag, i just couldn’t justify spending the money on a pair of pants that i wasn’t complete in love with. i mean, mediocre pants or eight grande americanos? i think you know the answer to that.

so maybe you don’t always hit the jackpot in the fashion lottery. sometimes you’re missing all six numbers, sometimes only one. but every once in a while, you find yourself holding the winning ticket. and for me, more often than not, that winning ticket, that championed article of clothing, was an item that looked “meh” on the hanger, but once it graced the curves of my bod, became marvelous.

which is why i’ll tout now and ten years from now this sentiment: you can never truly rule out an article of clothing until you try it on.

it’s also important to note that while the princess-jasmine-inspired trousers didn’t work out for me, they certainly did for miss kendi lea. which kind of makes my heart twinge a little bit. because i can’t help but wish that they had for me, too. 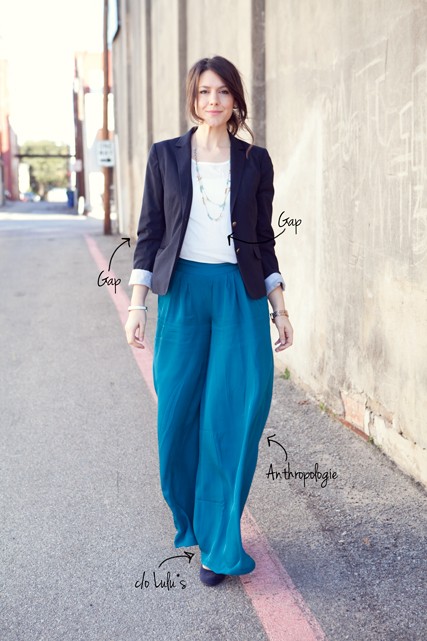