so i’m totally ready to return to those times when all i seem to do is write about me and dating and our awkward relationship, k? you’re so relieved, aren’t you?

ok, so i was just doing a little perusing through some old blog posts on the former home of tjnt&rs (rolls right off the tongue, i know) and i stumbled upon a few items that i had all but forgotten about but am very excited to revamp for inclusion in the book (hooray for more material). it also made me realize that i wish i had used the “tagging” option more often; or at all.

at any rate, it’s kind of fun to take a glance into the archives to remind myself just how many mini adventures or misadventures i’ve had over the course of the last two years. and here they are in no particular order:

i once shared a 20+ email exchange with a complete stranger blogger who i may or may not have a giant crush on based on his amazing ability to conjure up a good old-fashioned lol-fest every single time i read his musings. i kind of wish i could share with you the details of said messages, but i think for now, it’ll just be my little secret.

i called a boy (and proceeded to date for a time) who left his number to me on a napkin.

i used facebook to contact a gent i met along the route of the san diego susan g. komen 3day. did i mention we met while i was in a hot pink poncho? he was pretty great. until it became clear that we wanted different things. but i wrote him a thank you note regardless. because it was a pretty great ride while it lasted. and well, it single-handedly birthed a love for sushi.

i continued to foster my tendency for form “joeslationships” and went on an actual date with one of the store’s friendly employees. let’s just say sometimes it’s better to decline an invitation if you’re just not that into him. and yes, even despite your love for a free meal.

i learned of the art of the three-second stare/smile. i won’t say i’ve mastered it, but i will say that i am continually shocked by its rate of return.

i learned to love basketball and had a pretty good time watching it with a guy who reminded me that chivalry is far from dead. he also took me to tim mcgraw for my 26th birthday. and inspired a few really great blog posts. so to quote charlie sheen, “winning.”

i went on a blind date with boy (oh was he ever a boy) at the encouragement of one of my favorite couples and though our time together was very short-lived, it made me believe that not only do your friends really do always have your best interests at heart, but blind dates aren’t really ever “blind” anymore. thank you, facebook (i surprisingly didn’t write about this. shocking, i know).

i had a few “is this or isn’t this” meals with some very fine gents.

i realized that despite my best efforts, my attempts at flirting are usually lost on most men within the socially acceptable dating age range (about 5-10 years my senior).

i confessed to the world that eharmony did not work for me. and though it was quite terrifying revealing that to the public -or at least to my 1,000+ facebook friends (i know, that’s kind of an obscene number isn’t it? i haven’t defriended anyone since college) -the response i received as a result made my vulnerability more than worth it.

i got set-up (or almost set-up, the date itself never happened) with the same guy as one of my girlfriends. apparently san diego has exactly one eligible bachelor.

and though i didn’t write about it very often, i was consulted on more than one occasion for dating advice. which i find kind of hilarious on principle alone (i certainly don’t have much experience on “successful” relationships, but i suppose i have seen a lot of good ones come to fruition -most notably coach and tami taylor’s marriage on friday night lights). i still find it completely flattering that my friends come to me to hash out their latest quest for love. it makes me think that despite my less than glowing track record thus far, i’m hopefully doing something right.

and that one time i asked a boy to my high school valentine’s sadie hawkin’s dance in front of the entire school. which is why there’s a reason that the boy is supposed to take the lead on things. being the pursuer is terrifying.

so maybe this book thing has almost half-way written itself. and y’all have slowly but surely been getting a glimpse of it by tuning in to my daily musings for the past 730 days. but i promise there’s a few things i have yet to pen; so you’ll still have to buy a copy to get those pearls of wisdom and/or pearls of embarrassment, k? plus i haven’t even touched on my years at pepperdine (well except this one time) or all of the thank you notes i’ve written to the various men, well mostly boys, of my past (that’s kind of the premise of the book).

anywho, let this serve as a reminder of all of the fun i’ve had, of the lessons i’ve learned, of the awkward moments i’ve endured, and most importantly, of the great material i’ve managed to collect.

thanks for joining me on this awesome journey. and it’s not over yet! 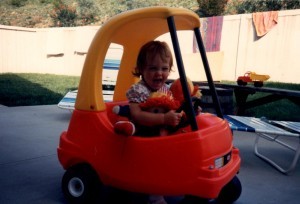 if only i could make the journey in this sweet ride.