this weekend was the carlsbad half marathon. and the full version, too. and two years ago, i was amongst that group of nervous runners, clad in my finest nike tempos, my race number proudly displayed on my chest. don’t give me that much credit, i wasn’t aiming for 26.2, but half of that. which is, in and of itself hardly anything to sneeze at.

and i wrote about my experience here. 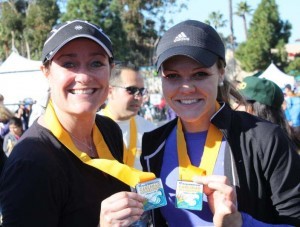 i just ran 13.1 miles and all i got was this lousy, i mean, awesome medal.

and while it certainly was exhilarating and memorable, and also earned me the title of “repeat offender” in the half-marathon club (the first offense came five months earlier upon completion of the america’s finest city half, also, please excuse the humble brag), i can honestly say that not a fiber in my being was wishing that i, too was participating in sunday’s event. because about six months ago (or so), running and i decided to end our almost two-year relationship. it wasn’t her, it was me. and after hearing injury-ridden stories from some of my running-committed counter parts, i do believe the break-up was a wise decision.

but i’m not going to lie, sometimes i feel a little guilty. like i should have tried harder to make our relationship work. i’ll hear accounts of friends “just getting back from a beach side run” or how they’re starting their training for the next big race, and i’ll get the tiniest twinge of sadness.

like i’m somehow failing at life (a bit extreme, but i’m trying to prove a point).

all as a result of my decision to hang up my running shoes for an undetermined amount of time (see also: for good). but then i remember that whole “stop comparing yourself to others” thing that i’m trying really hard to do these days. and as a result, i attempt to change my train of thinking.

instead, i look back on those miles logged, races completed, dozens of pairs of nike tempos worn and countless hours of girl-talk er, talked(?) with my above-pictured running partner in crime with a sense of appreciation and pride. appreciation for what they are -wonderful entries in just one of many of my life’s chapters. and pride, not in the “look at me, i’m so awesome sense,” but rather, the type of self-confidence that comes only through hard work and dedication; the sense of pride that arrives upon achieving a goal you never thought possible (me? run 13.1 miles? twice?); the sense of pride that comes when you realize just how amazing this God-given body truly is and capable of.

so maybe i’ve traded my running shoes for grippy socks, my nike tempos for spandex, and i spend more time in a carpeted studio than outside on asphalted ground. but that’s okay, too. because these exchanges will never erase the fact that for a time, running and i were in a monogamous relationship. but like most relationships, sometimes you just have to know when to cut your losses. she was good to me, she really was. but it was time to move on.