so i’m not sure if y’all have noticed, but i have been remiss in recounting uber exciting and in turn “blog-worthy” stories as of late. and well, this is obviously a direct result of the lack of uber exciting and “blog-worthy” events in my life. now this isn’t to say that my life has not be completely enjoyable and downright fabulous over the course of the last month or so, but it is important to note that sometimes, well, i feel a little guilty that i don’t have more tales of me leaving my number on a paper plate for a mysterious suitor or how i awkwardly tried to slither my bod into a pair of uncharacteristically skinny skinny jeans. so to appease y’all’s need for some recent happs in the existence represented by yours truly, may i present a list of current musings of the otherwise uncategorized variety? well it’s either this, or i can talk about how much i want to marry seth meyers and tim riggins simultaneously and well, i think y’all know i’ve exhausted that subject enough for a good long while. so random musings it is!

i’m not sure if its the fact that i watch strange things right before bedtime (so law & order: svu marathons don’t produce pleasant slumber thoughts?) or the fact that for once in my life i’m actually experiencing rem, but i have been dreaming up the wah-zoo lately and not only that, but the dreams themselves have been extremely vivid, too. so much so, that i actually remember most of the details come 5:22 a.m. and the sound of my marimba-ring toned alarm rudely wakes me from my eight hours of zzz’s. and since i’m sure you’re curious, such dreams have featured: one of my pure barre instructors, a “character” from the real world: san diego and an ex-boyfriend. dream analyzers, ready, set, what does it all mean?!

speaking of real world and its lesser popular counter part, road rules…the latest installment of the challenge premiered last week on mtv and i may or may not have been downright giddy with excitement. (i realize my popularity level may drop one or twelve notches with some of y’all, but i just can’t deny my affection for this otherwise train wreck of a show). this time around, the tagline reads: battle of the exes. yes, that’s right, the genuis producers may have hit ratings gold with their decision to not pin but pair exes with each other as they compete for the $200K cash prize. if the first episode is any indication of how the rest of the season will play out, then i better put on my seat belt, it’s going to be a bumpy (and oh so fabulous) ride. also, contestant mark long is 41. google him. he’s 41. good lord, i can only hope i’m looking that fab in 15 years.

you guys, this season of the bachelor is becoming too much. ben is no rafa (a moment of silence for rafa’s efforts during that incredible australian open final on sunday?). in fact, my lofty opinion of him is quickly losing levels of esteem with each passing episode and his ridiculous antics with one very shiny santa monica-based model. but in other news, i totally got the guys from envolve wines (ben’s winery, i can’t be sure it was ben himself, but that’s what i’m telling people) to retweet me during last night’s episode. so you know, there’s always a silver lining.

best new (well new to me and my family) party food idea? make-your-own-baked-potato bar. complete with the meat-free, dairy-free and gluten-free alternatives to all of your favorite condiments. “fak’n” bacon is actually quite delicious.

dear payless shoe source, i know we parted ways a while back, but i think i’m ready to date again. your whole “free shipping if the package is shipped directly to the store instead of your house” thing is really quite genius. all i had to do yesterday was stop by the encinitas location of my beloved pss, give the kind saleslady my moniker, and voia, these leopard wedges now hold a spot in my ever-growing shoe collection. so thank you again and bogo forever. love, me and my wardrobe. 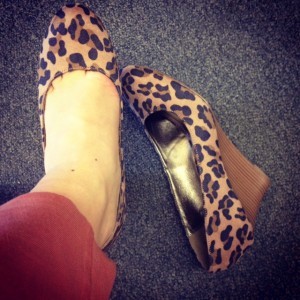 my new favorite way to wear my cindy-lou who hair do is with a piece of lace worn as a headband. not only does it keep my in-process of growing out bangs at bay, but it makes me feel both fancy and vintage at the same time. who knew a strip of cloth had such transformative powers?

have i told you that i adore these pants? because i do.

so most of my friends have/are in process/or are planning to move away from this fine city of mine. and it’s kind of a bummer (not kind of it IS). and sometimes i feel like i should be relocating somewhere, too. you know, just to keep up with the joneses (none of my friends actually have the last name jones). but then i take a stroll by swami’s with my momma on an unseasonably (almost summer-like) sunday afternoon and i think, by george (clooney? of the jungle? jetson?), why on earth would i live anywhere else?

trader joes. sunday. at around 4:30 p.m. don’t do it. unless you want to toy with your sanity.

moneyball. watch it. brad is good. jonah is good. and it’s not just another movie about baseball.

i finally caught up on my two back-logged episodes of gossip girl. and while i’m growing quite tired of chuck and blair not being together already (let’s hurry it up), i will say that blair’s locks are looking quite lovely these days. and also? it still weirds me out to see my college freshman year buddie, chace crawford moonlighting as an upper east-sider. ok, so maybe “buddie” is too strong of a term, but we did hang out for like a week during our first days at pepp.

um, oh if you haven’t heard, my bestie is engaged. 2012, you are fast becoming the year of the wedding. and you know what that means? plenty of chances to catch that blasted bouquet.

and on that note, i’m out, sauerkraut. hoping that this afternoon’s stop at starbucks for, you guessed it, my usual venti ice water, warrants a good tale for another day.