i’m a hugger by nature. sure, handshakes are nice (as long as they aren’t limp fish!) and yeah, yeah, probably more “professional,” but when it comes down to it, if i’m really happy to meet someone, i’d much rather say it with an arm embrace. plus, with cold season in full swing, i think hugs are more sanitary anyway. who knows where they’re hands have been. but i digress.

and after 26 years of perfecting my approach, i think it’s safe to say that i am very well versed in the art of hugging. but this hasn’t come without a lot of hard work and well, you guessed it, a whole lot of awkward moments.

i do believe a good portion of “hug boot camp” came during my three years at pepperdine. there i was introduced to a whole slew of hugs:

the side hug: employed by mostly pepperdine men (psh, let’s be honest, boys) who want to make it abundantly clear that they are not interested in sharing anything more than a platonic relationship with you (when the ratio of gals to dudes is 2:1, i suppose you can be picky). getting doled “the side hug” was like being blindsided sometimes, oh really, boo, that’s how it’s gonna be?

the bear hug: this one gets employed by both genders. the bear hugginess in the bear hug (aka its sheer strength) directly correlates to the amount of love shared between the two participants. even if that “love” is a bit over-exaggerated as in the case with sorority sisters (“omg, i am like OBSESSED with you, i love you so much and am SO glad we’re sisters!”). bear hugs between opposite sexes can be a bit tricky to navigate. unlike the side hug, the lines of platonic and romantic get very hazy. enter the other mascot for pepperdine university (the real one is the waves) the friendlationship. for those unfamiliar with this hybrid term, it can be deduced to “the more than a friendship but less than a relationship and rather somewhere in between” bond shared between any pepperdine student and their object of interest. activities to foster said almostlationship include: spending 24/7 in each other’s dorm rooms, dining at the caf for every meal, saving spots at convo for one another (and also at UM – the tuesday night youth group for college students), making out and/or cuddling on occasion but never speaking of it after it happens, taking each other to your respective greek formals (greek = sorority/fraternity life, not a dance with a grecian theme, although sometimes they coincided) -basically everything real couples do but without the title. because heaven forbid you DTR (define the relationship). i had many many a friendlationship in my days at pepp. heck, i’ve had many many following my days at pepp, too. needless to say, i know better than to read too far into the elusive “bear hug.”

the longer than culturally acceptable hug (see also: the awkward hug): oh my word did i have encounter my share of these. at first, they were usually employed as a joke by one of my best guy friends in an effort to make the situation as uncomfortable as possible. they were also usually conducted in the middle of the living room of someone’s apartment or other public area so as to increase the level of awkwardness (having witnesses does that). on occasion they involved upwards of six people (group hugs held for an absurd amount of time are unreasonably frightening, mostly for the fact that if caught in the middle, it becomes not only claustrophobic, but also smelly (depending on the group members’ hygiene habits)) and more often than not, they were very one sided, as in, one participant would drop their arms after an acceptable length of time while the other would insist on holding the embrace, taking no regard for their partner’s decision to disrupt the hug itself. again, more often than not, akward hugs stemmed from a place of jest. but every so often, there came a time when a hug was prolonged for reasons other than sheer playfulness. i experienced this first hand during my summer abroad in madrid, spain. there was a sweet fellow in my program who had developed a crush on yours truly. and as flattering as this was, i was unfortunately not able to reciprocate said feelings. but seeing as i hate to break someone’s heart (and hate confrontation in general), i prolonged having any sort of “hey, look, let’s just be friends” talk with him as long as possible until one day over the course of those three months, i think he just caught on. i know i’m a horrible person, i’m sorry. i was young and in spain. i wasn’t thinking clearly. did i mention it was over 100* every day that summer? i blame the heat. but in my defense, this gent never actually came out and confessed his feelings for me, either. but he left enough bread crumbs for me to figure it out. one of those “crumbs” being his continual employment of the longer than culturally acceptable hug. and don’t think he got a mulligan just because we were in fact in another culture (with different cultural norms). an awkwardly prolonged embrace is awkward in any country if you ask me!  i can actually vividly recount serious conversations i had with a few of my spain besties painstakingly going over how long is too long to hold a hug. we ended up determining that anything longer than three seconds (which in and of itself is long! one mississippi, two mississippi, three mississippi, SEE?) entered into uncomfortable territory. in fact, we even staged a few times when we knew said awkward hug would occur (while saying goodbye after classes let out or upon return from an out of town trip), just so they could observe and confirm my already concluded thoughts. he holds the embrace for long time, right? they were kind enough to oblige me, adding that their hugs with said fellow never lasted as those shared with me. phew, at least i knew it wasn’t just in my head!

these three described embrace-types are by no means the only ones employed and/or received during my college experience -or out in the real world, since that time. they are probably just the most popular. but i would be remiss in mentioning a few other other “honorable hugmentions:”

the car hug: it’s always awkward when you have a center consul in your way.

the one person sitting while one person is standing hug: usually occurs when you show up to dinner and everyone has already sat down at the table. to avoid such awkwardness i usually request that the person stand, or if i’m the one already seated, i am sure to get vertical so as to avoid the ever-charming, face in boob (if female)/torso (if male) action.

the butt-out hug: made popular in wedding crashers (it has another not-as-blog-appropriate-name), it basically ensures that there will be no torso to torso contact while hugging. it’s lame and never welcomed, thankyouverymuch.

the “you thought he/she was going in for a hug but all they were really doing was offering you a handshake instead” hug: and there goes your hand into my sternum. it’s cool, i was actually going to ask you to perform the Heimlich on me anyway as i had a little something caught in my throat.

all this is to say that hugging, while it may have its awkward moments (some contrived, others accidental), is really quite awesome. in fact, we should all do it more often, whether it be for one second or for twenty-one seconds (okay, maybe not 21, that’s a really really long time). and most certainly if it occurs between two people who have mad love for each other. because sometimes all someone needs is a really good embrace to turn that frown upside down. 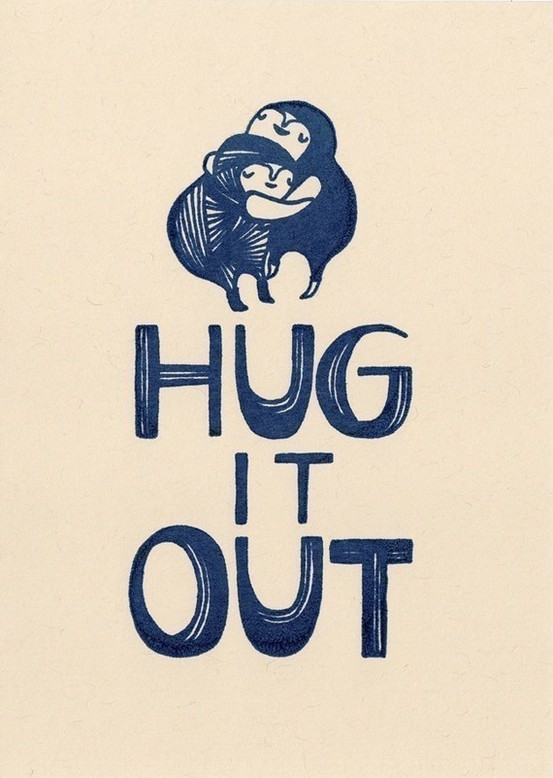