so last night was the academy awards. the oscars. hollywood’s biggest night. and for the most part they were pretty uneventful. and in case you missed them, the three-hour broadcast can be deduced down to the following sentence: we all need to go see hugo and the academy likes to give awards away to old people (meryl & christopher are not spring chickens) & frenchmen.

but there were a few moments worthy of notation (i’m looking at you, emma stone), as well as a few red carpet arrivals that deserve my virtual applause (again, emma, but seriously, can we be friends?). so in case you were wondering (because i know you were), here are my thoughts and feelings about last night’s event.

ryan seacrest got punked and handled it as best as anyone can who just got an entire box of bisquick poured down the front of his really really expensive suit while on live television (which equates to pretty well, actually). lucky for him, he probably had five more of the same exact outfit waiting for him in his trailer, because he emerged back onto the red carpet 30 minutes later sans biscuit mix. it must be nice being famous.

in terms of the gowns this year, let me just say that i’m a sucker for color on the carpet, so agree or disagree but i do believe the following ladies killed it: 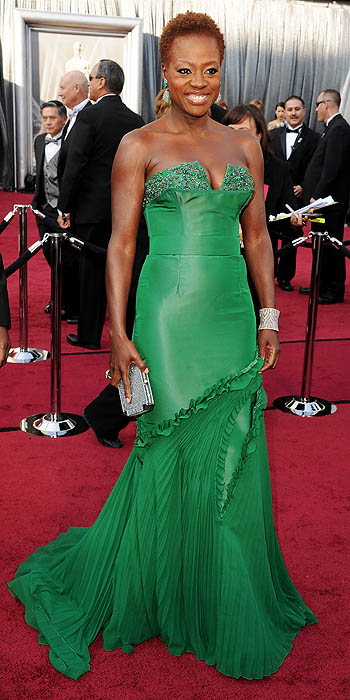 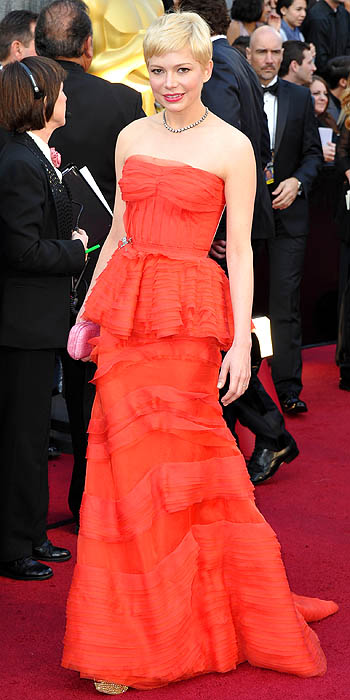 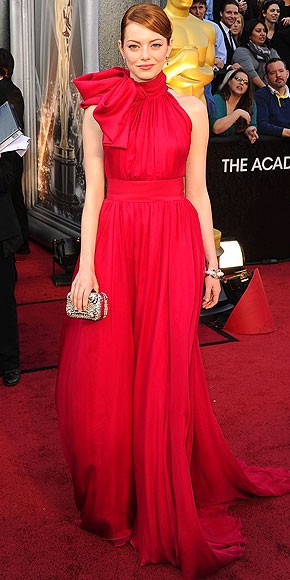 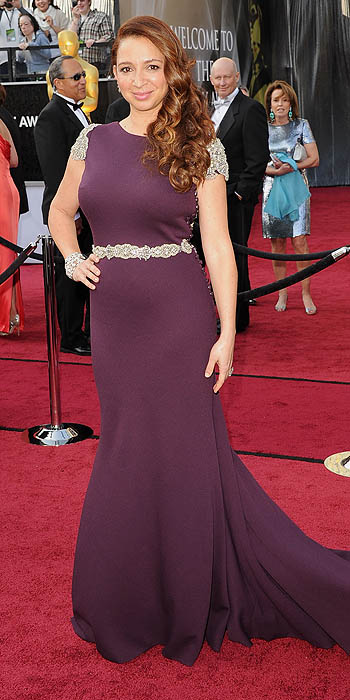 and yes, i know that emma’s dress looks eerily similar to nicole kidman’s neck-eating bow circa 2007, but isn’t imitation the most sincerest form of flattery? plus emma’s is totally a pinkish-red while nicole’s is more of a true-red (there’s a HUGE difference). and also? emma was 19 is 2007, so i’m going to let her off on account that she was probably out doing something teenage-y five years ago rather than taking visual dress inventory of the academy awards. but her stylist probaby should have said something… 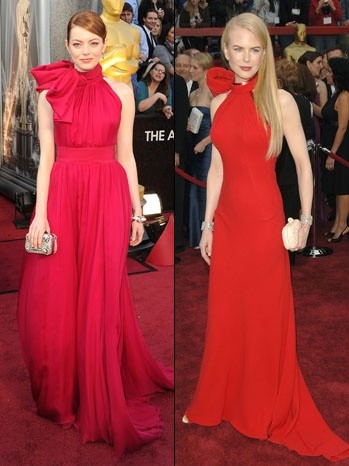 who wore it better?

honorable red carpetmentions go out to jessica chastain & mila jovovich.
okay back to emma again, i say we get her to do some sort of co-hosting bit next year because she was fabulous during her presentation. you know who else was a good time? the ladies of bridesmaids. so billy can stay (or seriously, let’s give justin timberlake a go at this), but let’s give him a little female company in 2013, k?
bradley cooper, what was with the creep stache? eh, you’re still hot.
as are you, colin firth, as are you.
wait, why was anna farris there?
not to brag or anything, but i totally called the best picture win. but probably so did half of america.
(not) speaking of the artist (get it? it’s a silent film!), sure, it won the big ones -best actor, best director and best picture, but who knew hugo would walk away with the most trophies of the night (five)? martin scorsese’s eyebrows must have magical oscar-winning powers. i have to believe that is why he’s obviously never plucked them.
following twitterfeed whilst watching the actual broadcast is extremely entertaining. mostly for the fact that it’s nice to know that most of the twitterverse shares your sentiments -they just choose to express them in 140 characters or less.
diddy now has an oscar (he was a producer on the best documentary winner, undefeated). as if his head needed to get any bigger…
and finally? the following body parts are having the best week ever: j.lo’s (almost slipped) nip and angelina’s right leg.
p.s. i’m pretty sure gwyneth is the only one who could get away with wearing a cape. not even superman himself would have gotten a freebie on that one. oh goop.
until next year, y’all.
0