though my life is pretty much run by a strict schedule (and i like it like that), there are things i simply can’t account for: the occasional traffic delay that hinders me from making it to my daily pure barre workout, the inclement weather forecast that makes driving north for the weekend an unsafe endeavor, or as was the case today, a bad case of the flu that puts my breakfast date out of commission. sometimes, despite my ability to fill my calendar with a myriad of activities with friends, family and new acquaintances alike (all in my grand scheme to not become the hermit that i am fearful i am prone to be), life just gets in the way. things happen. plans change. and that’s okay. because sometimes, well sometimes, plan b turns out to be just as fabulous.

this morning began as most saturdays do. i woke up, donned my best (and brightest) pure barre ensemble, rearranged my closet (okay, so maybe that’s just a one-time thing), drove to the studio, spent 60-minutes tucking, toning, burning and lifting my arms, thighs, seat & abs and to reward said workout, made my way to honey’s bistro & bakery to meet a friend for breakfast. but much to my dismay, upon exiting class, my inbox housed an email stating that my morning meal accompaniment was feeling a bit under the weather and was unable to make our date. i thought about forgoing honey’s all together, because despite my affinity for alone time, i rarely venture out to restaurants for some solo dining. but given the fact that at honey’s, i’m never truly alone as most visits warrant a reunion of the high school variety (or at least a pleasant welcome from the manager, himself who has by now become quite familiar with the mug of yours truly), i decided that today was as good as any to treat myself to a bowl of honey’s delicious oatmeal and a large cup of joe, even without company to share it with.

so that’s what i did. i walked right into my favorite breakfast spot, placed my order and scanned the crowded room for an available seat. but even after a handful of glances around the restaurant, it was quite apparent that i was in for a bit of a wait. i suppose i could pop a squat outside and enjoy my oatmeal on my lap if need be? but then, a family who had been occupying a table for four finally decided that they were ready to vacate their piece of honey’s real estate and i pounced on that spot quicker than a cougar on an eligible 20something at a bar in del mar. and though i was thrilled to know that i wouldn’t have to balance my hot oats on my quads in order to eat my breakfast, i couldn’t help but feel a bit quilty to lay claim on a table best suited for a larger party.

enter, let’s call him, “henry” and his daughter, “megan.” like me, they had already ordered and were now in need of a spot to enjoy their meal. with ample space to accommodate them, i couldn’t help but insist that they be the ones to fill the empty seats beside me. but what i thought would be two meals savored beside one another (they at their end of the table, me at mine), metamorphosed into a meal enjoyed together. somehow in 45 minutes time, i had not only satisfied my grumbly tummy, but maybe more importantly, had also made two new friends and solidified the fact that sometimes plan b really can be something special. it is equally as important to note that i took this interaction as a sign that i really can become fast friends with almost anyone (i’m pretty sure this trait was handed down directly from my momma), so gone are the days of that shy adolescent, say hello to shawna, the gal in her mid-20’s who eats breakfast with strangers!

i mean, don’t get me wrong, had i kind of wished my father/daughter pair was a tall, handsome, tatted, Jesus-lover who was ready to use his sarcastic wit to schmooze the spandex right off of me? duh.

but henry and megan’s company was no less fabulous and indicative of the fact that north county san diego just might be home to some of the nation’s most amazing and interesting individuals. and what had began as a morning of cancelled plans turned out to be beautiful nonetheless; i was still able to get my tuck on and savor my honey’s bowl of oatmeal, my breakfast table was simply occupied by a different set of guests.

so here’s to more interactions with the henrys and megans of the world. to plan b’s and to bringing your smile and a friendly demeanor the next time you venture to honey’s. because if today taught me anything, it’s that you never know who is going to join you for breakfast. 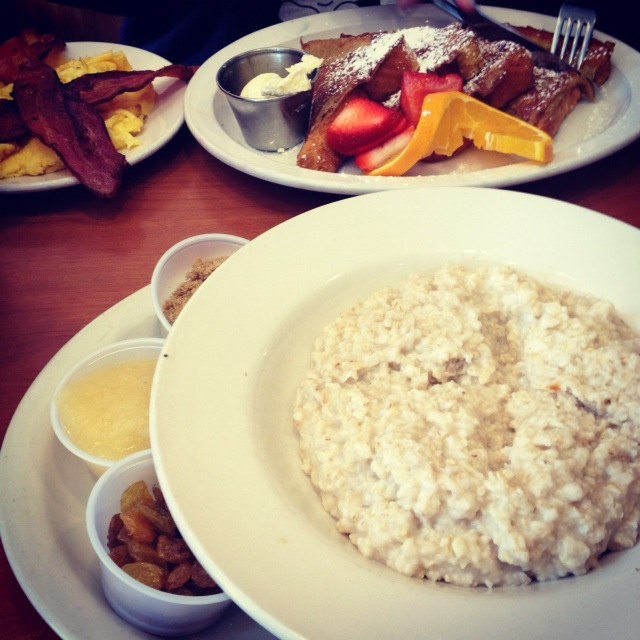