first, let me set the mood…

despite the pitter patter of rain drops across the county, my momma and i finally made it down to balboa park (after talking about it for at least a month) so we could “set sail” (don’t even worry this post is going to be FULL of puns, consider yourself warned) for theNat’s titanic: the artifact exhibition, er, uh, exhibition. and apparently many other san diego families had the same idea in mind because the museum was hoppin’; which made sense considering that museums are both a fun indoor AND educational activity for little ones on a blustery day.

we arrived early for our prescribed boarding time (i told you…) and were pleased to learn that our price of admission also granted us access to the “all that glitters” gem exhibit located on the ground floor. for a recovering gem-a-holic (true story, the gem tent at the del mar fair was by far my favorite part and i have the quartz paper weights to prove it), this was a no-brainer. and obsession aside, the collection really was remarkable. and enviable. i had half a mind to bust open a few of those glass cases and snatch a few of those twinkling trinkets. but you know, that whole jail thing sounds like a drag and those docents were on us like white on rice (or another witty idiom), mostly for the fact that my mom whipped out her camera to snap a photo or eight, and though photography was allowed, the flash feature was not…you regulate museum docent, you REG-U-LATE.

here are the fruits of her [almost illegal] labor: 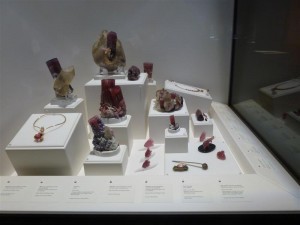 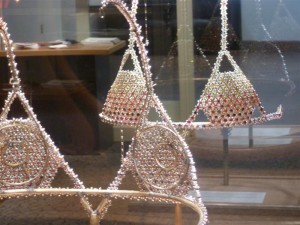 i was hoping to wear this for halloween this year. eat your heart out, victoria secret.

following getting our glitter on, we headed upstairs for our 11:30 a.m. departure aboard the rms titanic. 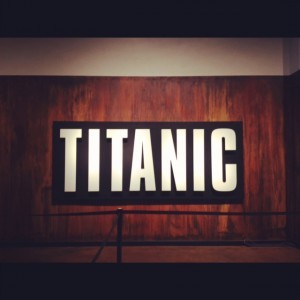 upon arrival, we were both handed a mock-up of the original boarding pass, complete with a bio of an actual passenger. therefore, i left shawna at the door and took on the persona of mrs. ada luther ball, a widowed floridian making the journey back to america to further tend to her work as a christian missionary (not too shabby of an alter ego if you ask me). i even kind of sort of dressed the part. 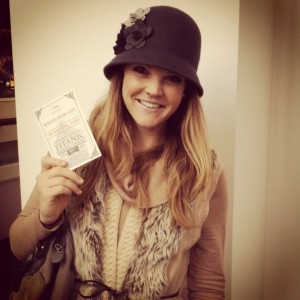 the exhibit itself was quite crowded which made reading some of the artifact captions and other literature posted on the walls a bit more arduous to navigate, but with no specific time table for our afternoon, we paid no mind. much like the alcatraz excursion in san francisco, the titanic exhibit offered audio supplementation which, looking back, would probably have only enhanced our experience. darn that hindsight, it really is 20/20. regardless of the lack of recorded device plastered to our ear, momma and i thoroughly enjoyed our time aboard the fateful ship. perhaps the most interesting aspect of the exhibition itself was the comparison amongst the three classes of passengers. everything from the ticket price (fun fact: the price for a first-class ticket in 1912 would equate to $103,000 in today’s standards. i don’t know about you, but that is a lot more than i’ve ever (or my parents have ever) paid for a spot on a boat!) and the sleeping quarters to the daily menus and available amenities (are turkish baths really necessary?) were all described and categorized by the passenger’s class level which really put things in perspective. let’s just say you would have really wanted to be in the upper echelon. double-bunk beds in a 8X8 ft. room? no thank you.

finally, to bring things full circle, at the end of our journey through the artifacts, we were greeted by the “survivor’s wall” in which we learned of our alias’ fates. as a member of the second-class passengers, i, rather, ada was amongst those lucky enough to board a lifeboat to safety (in case you were wondering, my mom’s alter ego -mrs. ethel ball (sister of lucille?) also survived). again, like the amenities and description of meals, the wall of survivors was also divided amongst the classes. it didn’t take a genius to deduce that it yet again paid to be amongst the wealthy as their survivor count far exceeded their of humble-means counterparts. 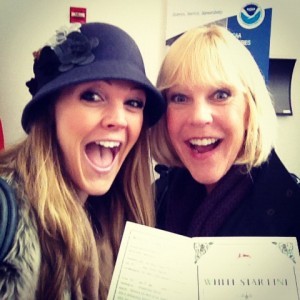 these are our "yay! we survived" faces.

i also wrote an eerily similar recap of my experience for askmissa.com and it should be up tomorrow. so you know, if you like to read repeats of things, you should check it out (shameless plugs).

besides boating, gem-stoning, and being all culture-y this weekend, i also was fortunate enough to watch the john isner vs. novak djokavic semi-final match from the bnp paribas open. this might mean diddly to you, but as a tennis enthusiast, this match was quite exciting for the fact that isner (he’s basically america’s last remaining hope in the top 10, sorry andy) squeaked out a W against the world’s number one. he’s also just the cutest. here’s a visual, in case you forgot. 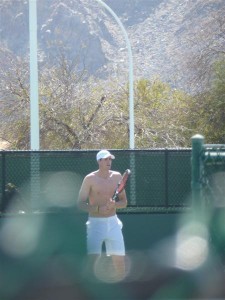 i was basically just looking for another reason to post a photo of him shirtless. yum.

nevermind the fact that federer wiped the court with him in the finals. what do they say at the academy awards? it’s a pleasure just to be nominated? i’m sure that’s how he felt going up against that caliber of greatness. plus, his rankings are going to sky-rocket for sure. and that is nothing to sneeze at. virtual high-five, jonny!

saturday night the rents and i watched charlize theron get all un-glammy (for being one of the most beautiful humans in the world, they sure do make her look hagsville in movies these days) in the dark comedy, young adult. and while my pops matter-of-factly uttered, “i did not like that [sam i am]” as the closing credits rolled across the screen, i must say, i had to agree to disagree. while it didn’t earn the coveted title as one of my “favorite movies of all time” (let’s be honest, those titles are reserved for movies about ice hockey and teenage divas), i would certainly recommend it to a friend with the warning that though is far from an “upper,” it is certainly fodder for social commentary -sometimes the grass isn’t actually greener on the other side.

yesterday played out similarly to every other sunday in the past -pure barre (party of 3! gotta love st. patrick’s day-induced hangovers and their ability to clear an 8 a.m. class), church, a soul-filling meeting with my mentor and a load of laundry; a brief moment of inspiration also yielded a few more pages logged in the old book followed by a late afternoon shower and a few episodes of law & order: svu (why am i addicted to this show?! seriously, what does this say about me as a person?). and though my sundays have become quite predictable as of late, i wouldn’t have them any other way. there’s just something to be said about ending/starting your week with a chaos-free (some even might say, gasp, boring) 24-hour span.

so monday, if you could let the rest of your weekday friends know that they need to pass by quickly so i’m reunited with saturday soon, that would be super great. thanks so much.

oh and one more thing. jack and rose say hi.