that’s a lie, nine times out of ten i have my phone on vibrate. mostly because i’ve never changed my ring tone to be anything different than the same sound my alarm rudely makes at a-less-than-welcomed hour, so you know, i naturally equate phone calls with sleep interruption which just means that if you were to call me at the same time that i had randomly decided to switch back my phone from its vibrate status, i may or may not be slightly perturbed in the first few moments of our conversation. and i never want to put anyone through that. which is why i choose to leave it on vibrate. or you know, i could change my ring tone, too. eh.

so my phone rang yesterday. around 10:30 a.m. i was en route to church and as i glanced down at the name that flashed across the screen, i was a bit confused as to why this particular number would be phoning me at such an hour.

it was pure barre.

perhaps there was a discrepancy with my account? or with the frequency i attend classes, it wouldn’t be that strange for one of the instructors to call just to say hi. but as i answered the phone, the concern in the receptionist’s voice indicated that perhaps the issue was a bit more severe than originally thought.

“shawna, is everything okay?”

of course, i thought. it’s better than okay.

she went onto explain that i had been signed up for sunday’s class and had neglected to show up, something, she noted, i never do. therefore, reasoning had caused her to conclude that something had indeed happened to yours truly. because let’s be honest, me? miss a pure barre class? something catastrophic must have happened!

i assured her that i was indeed just fine but that her call of concern had been much appreciated. i further revealed that i had thought i had asked the receptionist the day before to cancel my attendance for sunday but perhaps in the shuffle of things she had forgotten to do so, thus leaving my sign-up active in the system.

anyway, this really isn’t a very fascinating story in and of itself (although it is really sweet that my pure barre peeps care for my general well-being), but it is presented to prove a greater point.

i know, i know, just tell me the time, shawna, not how they made the watch.

but what can i say? i’m a story-teller. i tell stories. i am loquacious and verbose and extremely detailed oriented. it’s the reason you read these musings though, isn’t it?

but seriously. the point.

i love my routine. i love knowing i’ll get my tuck on five times a week. i love coming home to an already prepared dinner (not cooked, just prepared) and night showers have become my saving grace. i love my predictability.

but in the same right, i’ve learned that the line between routine and rigidity is quite fine. and while consistency is a fabulous quality to possess (if i do say so myself), inflexibility can be a fatal flaw. and so that’s where my new friend “compromise” takes center stage; not a complete abandonment of my schedule, just a tweaking of sorts. an exchange. giving the old google calendar a bit of a face lift. trust me, she’ll look so much better after “surgery,” too.

sometimes routines are forced into alteration. circumstances dictate a change in events. and you have little say otherwise.

but sometimes edits are made on your own time. for a multitude of reasons: to avoid plateauing, complacency, and rigidness, and well maybe most importantly, for the purpose of giving yourself the opportunity to live a little every now and then. the universe will continue to spin on its axis if you forgo that 8 a.m. sunday morning pure barre class (thank goodness) or even if you decide to trade vegetables for a big bowl of fro yo. life is about schedules, yes, of course, how would anything get done otherwise? but it’s also about spontaneity and substitutions and making time to enjoy activities (and foods) perhaps outside the realm of your usual comfort level (and no, fro yo isn’t beyond my comfort level but remember that one time i gave up all lactose-filled items in an effort to thwart the war against bad skin? let’s just say a trip to yogurtland was a more momentous of an occasion than just the simple fact that any trip to yogurtland is magical in and of itself). because life is just too short to allow fear stand in the way of you and fro yo (among many other things).

and whether changes in the grind are self-motivated or are made with another in mind, the fact that they transpire at all is where the beauty lies. so here’s to making more alterations to the day planner. and to many more future trips to yogurtland. 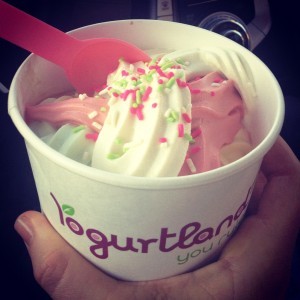