i think we put too much emphasis on the big stuff -the big moments; the monumental musings that play out within our lifetime. i mean, they are GREAT, don’t get me wrong. i can still remember the rush of emotions that came over me when i received my letter of acceptance into pepperdine university as well as the feeling of such amazing accomplishment as i was ushered into the alumni association three years later. i’ll never forget my first kiss, or the day i became a licensed driver, or most certainly the day i signed the papers on my condo. and gosh help me if i wasn’t a puddle of emotions as i watched my sweet sistah marry the man of her dreams two years ago this past march. there have been amazingly monumental snapshots in time that i have been blessed enough to capture with my memory’s lens over the years. and i look back on those moments with an overwhelming sense of nostalgia and gratitude. and there are probably accompanying photos to help make the whole “looking back on fondly” part a little easier, too.

but sometimes i think to myself, “self? what about the little moments?” the seemingly less noteworthy times in life that if we’re not careful, may just pass us by. and while their date or time or even the activity itself may not warrant a photo and caption for life’s milestone book (although it PROBABLY did include an instagram of some sort), i have to believe that they are just as important, if not more important to our story. the times when we’re wearing sweats and eating dinner in the middle of an unfurnished apartment. the times when we dance around the kitchen singing christmas music at the top of our lungs (never mind it’s july), or the times when we, still clad in our bathing suits and flip flops, run out to home depot for extra paint brushes five minutes before closing time. times when plans go unmade and yet manifest themselves in a very special way. these are the times when life happens. and these are the moments i choose to remember.

true story. this weekend, in addition to logging in some very necessary hours upping my vitamin-d supply and wearing copious amounts of red, white, and blue (duh), on a whim and at approximately five pee-em on saturday evening, my guy and i decided to paint his living room. yep, the entire living room. so with little more than a rough color scheme and a spontaneous attitude, off we went to home depot. and after only minor debate (i was actually quite impressed with the promptness of his color selection) rather he (and i, being the supportive girlfriend that i am, affirmed him in said decision) concluded that come saturday around midnight, three of the four walls would be freshly coated in the slate navy blue hue aptly named, “evening hush.” and along with a gallon of said color, in the basket went brushes, drop cloths, painter’s tape, and the well wishes of our friendly orange-apron-wearing gang (okay, so those aren’t really tangible, but they were included with purchase).

and now to paint.

truth be told, i’ve never really painted more than a canvas in high school art class. and you know, that’s about 16X20. and while i’m not sure about walls where you live, but here in san diego, they are like 15 times that size. i don’t think the math on that is right, but i’ve never claimed to be a former mathlete, so bear with me. just know that painting a wall in someone’s home, as in, where they live and where other people may or may not come to visit and admire said home and said paint job (a canvas can be thrown away or hidden under a bed in some rogue guest room never to be seen again, but a wall is you know, the FOUNDATION of a home, so there really isn’t much hiding a botched paint job (right, you could just paint over it again…stop being so logical, i’m trying really hard to make a point)) is kind of intimidating. no, like really intimidating. and combine that with my innate desire (and at times fatal flaw) to please people and that whole perfectionism complex and you have a very frightened painter’s assistant (aka ME). but i can balance on a chair (and on my tip toes no less, thanks, pure barre, also, forget i just said that mom and grandma) like a BOSS to reach those corners where paint rollers just have no business covering. so at least i’m not a complete waste of space.

luckily, my guy is a seasoned painter (see that? always learning about this one). and well his vote of confidence in my yet to be discovered painting skills was inspiring, so i put my game face on (as well as some “it’s totally okay if this gets paint on it” clothing -something told me my sea foam green j.crew shorts and pink gap sweater weren’t falling into that category) and got to it (i’m not gonna lie, “eye of the tiger” may or may not have been playing in my head as i took that blue painter’s tape in my hands).

and fast forward through the actual painting process and even faster through the whole watching paint dry part, too and let’s just recap the end result, shall we?

i messed up in a place or five. paint got in my toes, and on my hands and legs. i accidentally painted the ceiling once and certainly could have used a level to ensure that the taping off of the molding from the wall had produced a cleaner line. and gosh was i mortified each and every time my “whoopsies” tendencies got the best of me (spoiler alert: it happened a LOT). but you know what? my guy is awesome. and most of the time he just laughed (me too, too bad mine was nervous laughter). and assured me that the mistake (no matter how magnified i concluded it to be) was nothing that a little touch up couldn’t fix. you see, he seems to know these “fatal flaws” of which i speak, and he has this crazy ability to affirm me right out of them.

it’s funny to think what began as a spontaneous DIT project (thank you, E for your clever acronym) -do it together (as opposed to the ever-popular and pinterest-induced DIY project) actually managed to monopolize a big chunk of our weekend. but i wouldn’t have asked for a better way to spend my memorial day holiday-those hours spent paint splattered, weaving in and out of misplaced furniture, and singing whatever song decided to pop up on his spotify playlist at the top of our lungs will be committed to memory for a good long while. they are moments when you realize that sometimes it’s not always about the big things. that the little things; the seemingly insignificant moments, can actually be big things, too. this weekend further solidified how important it is to have someone in your life that, in addition to sharing in the fabulous, you can also share in the mundane (except, when it comes to my skills, painting wouldn’t really be considered “mundane” but that is neither here nor there). it also confirmed how much “teamwork” isn’t simply a term reserved for competitive sports teams or office colleagues. it’s very much an integral part of any functioning relationship. i taped and filled in the hard to reach gaps, he paint rolled and amended my “whoopsies.” now that’s a dream team if i’ve ever seen one (we should really think about getting t-shirts).

but in all seriousness (she says as she is about to quote ferris bueller’s day off, a movie that you know, screams solemnity), “Life moves pretty fast. If you don’t stop and look around once in a while, you could miss it.” with a paintbrush in my hand and maybe only after our second trip to home depot, i managed to look around at “life” this weekend. and you know what?

and i have drops of “evening hush” in between my toes to prove it. 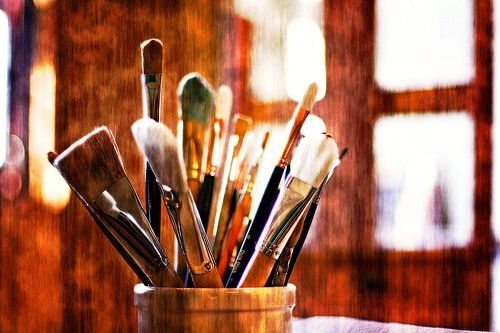