so remember this girl?

seems like a distant memory now. i mean, thank goodness i have the medal, t-shirt, and race bib as evidence (well, and this photo, too) to prove that yes indeed, at one time, i was quite the runner. a 13.1-mile runner at that. TWICE. but this is by no means a boastful post, quite the contrary in fact.

because thursday night, this girl, yes the SAME one pictured above (also i really shouldn’t have worn eyeliner that day, i mean, hello raccoon eyes), GOT WINDED climbing a hill to her dear friends’ apartment. and try as i might to blame it on the fact that you know, i was carrying a bag full of groceries and i had just come from a strenuous pure barre workout (“strenuous” being a relative term), i knew the truth. while pure barre certainly has done wonders for the bod of yours truly, i have a heart to look after as well (in more ways than one), so i suppose it’s high time i stop kidding myself and add back in some cardio (i mean, i know car dancing is aerobic exercise, but it only achieves so much, you know?) into my workout routine. also, it didn’t help that my guy was equally as appalled at my lack of endurance when i recounted said story later in the evening.

so i think that means running and i get reacquainted, right? woof.

i mean, i kind of sort of miss it. wait, did i really just say that? yep, i guess i did. maybe what i miss most about running is (well that AND) the social aspect -having a running partner-in-crime with whom to log a few miles of pavement. a cardio companion; someone to challenge me to push my pace, or in the very least, someone to carry me home when i’ve twisted my ankle jumping off a curb (that hasn’t ever actually happened, but i’ve come dangerously close).

i always said that when i finally snagged myself one of those good ones (i.e. a boyfriend), i would make sure (or at least hope) that he enjoyed exercise because hey, i do and it’s fun to have stuff in common. so it’s kind of awesome that it has been by no suggestion of my own, but rather his, that i channel my inner stella and get my [running] groove back.

and i mean, i’m not gonna lie, i’m actually quite nervous about lacing up those asics again. sure, there’s that old saying, “it’s just like riding a bike” meaning that a rusty activity of your past can totally become second nature again. except that one time when my gf and i rented bikes in steamboat springs, colorado over a wedding weekend and i legitimately thought i had forgotten how to you know, ride a bike. no but really, i remember actually uttering the words, “so it’s really NOT like riding a bike when you can’t seem to remember how to RIDE A BIKE.” but before i could pout and wallow in my blindingly obvious shortcomings, the kind employees of the town bike shop told me to take a breath, lowered my seat a bit (who knew that would make such a difference?), then patiently reminded me of the fundamentals of bike riding -you know, pedaling, braking, throwing down that kickstand like a boss -the essentials, and finally, after, i’m not exaggerating, like at least half an hour, i felt sturdy enough to venture out on the town.

right, so i’d like to have a word with the person who coined that cliche. because i’d like to poke a hole in his(or her?) theory.

so yeah, based on previous experience, i’m going to venture to say that my return to running may bode a similar outcome. but with less equipment (i mean, it’s just me, my legs, my shoes, and the pavement), i’m hoping that that whole second nature-ism is cultivated at a much speedier rate. and if not, then, babe, i apologize in advance, because if i’m winded walking up a slight incline, i can only imagine what my breathing patterns are going to resemble once we take the trail. i suggest you wear an ipod with really really secure ear buds because you’re going to want to drown out the sounds of my panting, gasping, and overall wheezing.

garsh, and get me a pair of those ear buds, too. even i won’t want to hear that terrible sound.

but everyone has to start somewhere, i suppose. and you know, it may be nice to have a big slice of humble pie (Lord knows i could probably use it after all of that horn tooting). no but really, it’s probably going to stink (think of a much more severe word that would just be too inappropriate to use while mom & grandma are reading). and i am pretty sure i’m going to be quite sore afterward. and i might even complain the entire time (actually NOT true, i am really good at that whole mind over matter thing). and you better believe that i’ll coordinate some sort of cute outfit to ensure at least i’m aptly dressed for said occasion (even if my stride makes me look like that one time phoebe ran through central park)

but relationships are all about new experiences or in my case, revisiting old habits that you thought had died hard (actually, it died pretty easily thankyouverymuch). and if my guy can sit through mean girls, eat copious amounts of quinoa, and share in my excitement when i go over ever painstaking detail about my latest shopping trip to j.crew (and all of the awesome stuff i found on sale!), then you know what?

the very least i can do is take up running again.

plus i mean, the extra cals burned just give me an excuse to eat a second helping of my aunt’s amazing vegan mudd pie (psh, as if i needed an excuse).

so in the words of miss adele, herself, “should i give up? or should i just keep chasing pavements?” (see what i did there?)

here’s to the latter.

oh and one more thing, to the makers of icy hot: start mass production now, i have a feeling i’ll be needing ample quantities of your product very very soon. 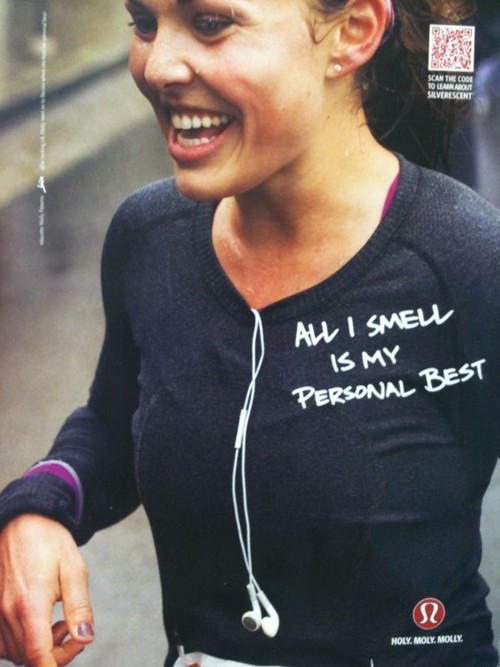 funny, all i smell is me not remembering to put on enough deodorant.