okay, so i mean i’ve never actually read men are from mars, women are from venus but you know, i feel as though life in general has made it easy to deduce that yes, there are MANY an occasion when it is more than apparent that gals and gents are visiting from opposite locales entirely.

like that one time i talked about how an ex thought it would be a good idea for me to make clogs happen (stop trying to make clogs happen; it’s NEVER going to happen) and that girls really do dress for other girls (or themselves) because if they dressed to impress guys, we would be wearing clogs. and well, maybe not much more. but i feel as though this could go down a slippery slope, so reeling it in, folks, reeling it in.

so yes, xx & xy’s are very different. and that’s fun, because it definitely keeps life interesting. but it can also be difficult. especially when you try to cross the “language” barrier. it’s hard to speak guy when you’re fluent in gal. but i think i have found a way to navigate around it. or at least i’ve found that if you try to understand where they’re coming from by relating the subject to a similar situation in the girl world, things (not everything but some things) begin to make more sense.

my guy likes cars. a lot. like a lot a lot. like when i caught him, eyes glazed over, looking out his driver-side window recently, i knew he wasn’t checking out the gal who had pulled up beside us, but rather, his peepers were locked on the car itself (it was a viper and yes, it totally warranted a prolonged stare).

and i mean i like cars as much as the next gal (which is maybe i don’t know, on a scale of one to jay leno (he has like a gazillion cars in case you don’t understand why i am making that comparison) is maybe about a 2), but they are more of a “get me from point a to b without me having to fill up my gas tank every five seconds” kind of necessity. i know the major brands and that there’s big difference between a v4 and a v8 and that you should NEVER put diesel in any car other than those that run on diesel and that oil should be changed every 5,000 miles or so but you know, other than that, when my guy starts throwing around acronyms (AWD, RWS, BRZ, STI, MTV (ok so i made the last one up), it’s MY eyes that are now the ones that are glazed over.

but then i got to thinking.

you know when i get really really excited about, oh you know, this dress bought ON SALE at a recent j.crew trip? 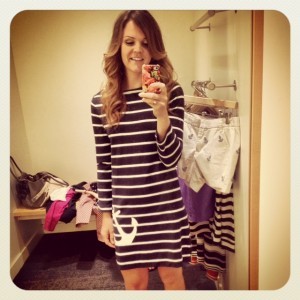 and when i go on and on about how i bought the same neon pink khakis from gap in the neon yellow and bright blue varieties (also on sale) just because i love them so much and they will go with everything and i can certainly wear them to the club on casual mondays because they are not denim and we are a “no denim” facility? and even those more sporadic times when i mention that i had the best time planning outfits by using pinterest during a laxidasical sunday evening? and he smiles and nods because he’s sweet and he knows it’s important to me but inside i have this feeling that he’s just doing it to appease me?

IT’S THE SAME WAY I FEEL ABOUT WHEN HE TALKS ABOUT CARS. i mean, not entirely but kind of. i get excited for him but i’ll never reach the LEVEL of excitement he has. just like he’ll never reach the apex of enthusiasm i have when i snag the last pair of printed crops on SALE and in my size at anthropologie.

because relating his love for cars to my love for bargain shopping/outfit planning makes me get it. and suddenly i’m speaking his language.

which just goes to show you, though we may be from different “planets,” with the right translator, we can certainly learn to communicate.

and if not, there’s always this: