my first crush -well let me clarify, my first celebrity crush was (aside from the bandwagoning love affair with jonathan taylor thomas, but i mean, who wasn’t on that bandwagon?) an outlier of sorts. a tatted, rocker with bleach blonde tips and a “don’t give a care” attitude? totally sounds like someone i would love, right?

no but seriously, regardless of its randomness, i can’t deny my deep rooted love for none other than the lead singer of 90’s sensation (okay, so maybe they weren’t really a sensation, but they were like way popular) sugar ray…

i know, i’m not even sure how the crush formed, either. but instead of trying to explain its origins with logic or reason, i simply went with it.

fast forward to last night; the guy and i went to the summerland concert at the san diego fair (again, using its proper name but STILL not happy about it). what is summerland, you ask? a reunion tour of sorts with four of the 90’s heavy (musical) hitters -lit, gin blossoms, everclear and, wait for it….

the boy was really quite excited for everclear (as was most of the crowd, i soon discovered),

but as for me, i was counting down the minutes until i was finally united with the object of a crush over a decade strong. and when it finally came time for mark and the band to take the stage, y’all, i was basically a giddy schoolgirl. to use the boyf’s term, i was smitten.

i watched him (mark), clad in bright red pants, a black button-down, white blazer, and wayfarer ray-bans, prance around the stage, mesmerized by his natural swagger and ability to woo the crowd with just a single look. i sang along with every word as they played “someday,” “answer the phone,” “every morning” and yes, of course “fly.” and though some of the songs dated over 15 years old, every lyric came back to me as quickly as the first guitar string was strum. ah, nostalgia.

anyway, there really isn’t a point to this story other than to tell you that last night, the sixteen-year-old version of myself freaked out a little bit.

but let’s be honest, the twenty-seven-year-old version of myself freaked out, too. 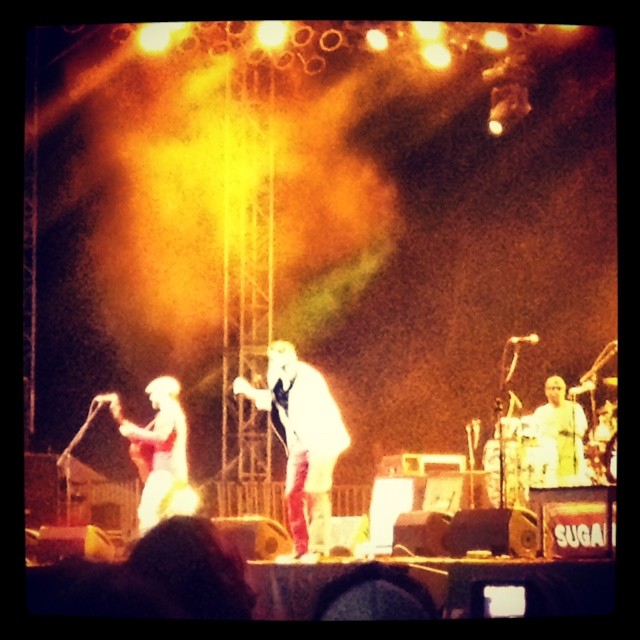 be still my heart.