i’d like to think of myself as a self-starter. driven in my own right, with an attitude to simply go out get GET MY DREAMS DONE (and i mean, if i’m not, then i’ve certainly lied on my resume for the past nine years. whoopsies). and i really believe that in certain aspects of my life, i am. to quote jay-z, “i’m a hustla baby, i just want you to know…”

but then again, i can’t help but to feel that there are areas where i tend to play the victim to my otherwise plateuated fate; allowing my fear of failure and/or disappointment cripple me into inevitable inaction.

last saturday night, the boy and i attended a birthday dinner for a friend. and in true “me” fashion, i managed to quickly engage myself in conversation with another of the dinner guests who occupied the seat directly across from me. and of course we went over the obligatory inquiries that accompany an initial meeting -what do you do? where do you live? what college did you attend? and how long have you called san diego home? and i was happy to collect that information. but perhaps the most interesting piece of knowledge i gleaned from our exchange was the fact that he had recently written a book and published it for kindle-download and purchase on amazon.com.

apparently it was just that easy; so matter-of-fact. i wrote it. i published it. and people can buy it online.

and that information hit be like the sting of a cold shower. i had been sitting on the sidelines of this particular playing field of my life, with a “woe is me” attitude and a despondent spirit. and though i had the idea and some rough material to work with, the journey from a to b still seemed eons apart.

so i began to probe him, perking up in my seat, i hung on every word. was it really that simple? it sounded too good to be true! and while his assurance was a welcomed encouragement, it also ushered in otherwise unwelcomed emotions of disappointment and embarrassment in myself. i was a go-getter. who was this girl too afraid to pursue her biggest dream to date?

sometimes you don’t want to realize your shortcomings (but really, who does?). but then just like that, and maybe (no definitely) when you’re least prepared, they reveal themselves in the most sobering of ways.

but rather than be discouraged by the true reflection in the mirror, perhaps it was just the resurgence i needed to get a fire lit under me again. to claim this insecurity as a falsehood i had believed for far too long and to transform my attitude to that of “yes, i can.”

so the next steps to take? of that i’m unsure. i mean, it would probably be good if i actually compiled all of the little vignettes i’ve composed over the past year into a succinct document. preferably one with a pretty cover (boyfriend, i’m looking at you for help with this). but regardless of the nature of the step itself, the direction is clear. it must be forward. because with the contents of saturday’s conversation resonating in me with fervor, i refuse to continue to stand in my own way.

and maybe when it really comes down to it, when faced with an element of risk, i all but flee in the opposite direction (complete with little dust cloud spinning around my heels). i’m pretty much risk-averse if you haven’t figured that out by now, i mean i even get a pit in my stomach during the occasional jay walk. so you know, doing something as risky as publishing very personal stories for all of the world to see and (hopefully) purchase may or may not scare the bejeebies out of me.

but then i think, wait a hot minute, shawna leeann. isn’t publishing very personal stories (though they are not for purchase) for all of the world (and by “world” i mean “select facebook friends and twitter followers”) to see kind of what i’m already doing now? so really, what is the difference of taking it into a bit more public (and accessible) of a forum?

well, fine, when you put it that way, it doesn’t sound nearly as terrifying.

this past sunday, the pastor at my boyfriend’s church spoke on the topic of risk and reward. how no great reward comes without as equally as great of risk. it’s pretty simple, in order to walk on water, you have to get out of the boat.

but risk is scary and unpredictable and a laundry list of other unfavorable adjectives. but it is also completely necessary if you ever want to accomplish great things in life. and it can only be managed (and ultimately combated) by adhering to a deep rooted faith that the Lord will clear the path along the way. of course, choosing faith over fear is a daily struggle; just as easy as it is to commit yourself to remain with your eyes on the prize, is it to take your eyes off of it once more. but the continual election of faith over fear can be made easier when we choose to focus on the fruit of the reward rather than the sacrifice rooted in the risk.

so i suppose what i’ve tried very voraciously to say is this: the only one stopping me from fulfilling (or at least attempting to fulfill) my dreams is me.

could you kindly step aside, please and thank you? i have a book to get written and eventually published and i have no time for your silly insecurities.

love you bunches,
yo self 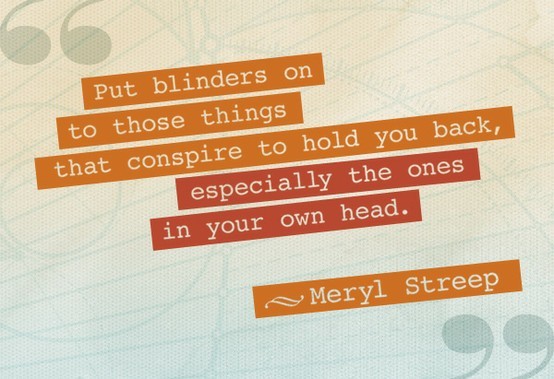 dear shawna, get out of my way. love, shawna