so i’ve been throwing a lot of noodles against the wall lately. proverbially speaking, of course. (although, i should really see if the boyfriend would maybe want to make (gluten-free) spaghetti this weekend so i could have the opportunity to throw some real noodles against the wall, too). you know, in hopes that a few of those angel hairs would find a nice comfy spot along that stucco. and it hasn’t warranted a rate of return as of yet, but that hasn’t at least stopped me from trying.

you see, kind of like when i talked about it here, i have recently witnessed some pretty awesome dreams come true for a few of my favorites with regards to the writing realm. and i’ve thought (again) to myself, “self? what is stopping YOU from doing the same?” “self, what exactly is it that you are you waiting for?” “self, why are you so scared?” “self, i promise you’re not going to run out of noodles, we got a really big package of them at costco, remember?”

when i posted the link above on my facebook profile a few weeks back, one of my friends left a comment that really resonated with me. she referred to a quote i have heard a time or two before but perhaps had never truly taken to heart. “what would you do if you knew you could not fail.” (robert schuller). but really, what WOULD i do? well, a whole lot more than i am doing now!

so i thought about it the other night, i suppose it was sunday, if we’re really keeping track. what if i really took some bigger risks, thought outside of the box, threw a few more noodles? what if i crashed and burned in the process? or what if my efforts were blessed instead? (when i “think” a lot of things tend to go through my mind). and i made a decision to take a little advice from eleanor roosevelt (oh, you don’t ask yourself “what would eleanor roosevelt do?” when making life decisions? i don’t either, this is the first time). 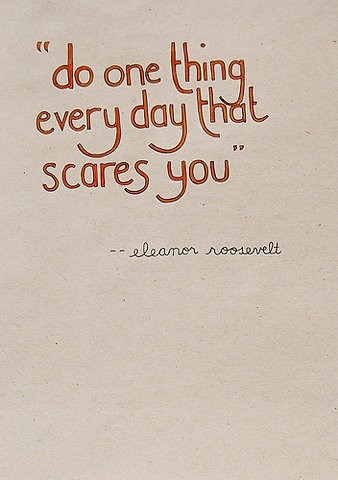 i mean, since there are a lot of things that scare me, i figured that finding one of them to execute daily didn’t seem too unreasonable a request. so i started on monday.

on monday i had an uncomfortable conversation with my boyfriend about my struggles with properly verbalizing when i’ve reached the point of hanger (hunger + anger = hanger; see also: hangry) come meal time. given my past, it’s easy to ignore the vital signs, especially if the person i’m with (i.e. him) isn’t ready to eat quite yet. it’s silly, i know, at 27 years old, i should know how to feed myself, but i would be lying if i didn’t say that it’s something i will continue to deal with in some capacity for the remainder of my life. it’s also deeply rooted in my need to appease people, sometimes at the risk of my own needs. “oh you’re not hungry? yeah, me neither (stomach growl, stomach growl).” he’s not buying it when i get quiet and a bit more irritable than normal (i’m a real PEACH, y’all). he has learned quickly enough how i get and he’s been incredibly gentle in approaching the subject on the whole. it’s a lot to take on, i realize, but it’s also par for the course. we all don’t come to the plane of life without a few pieces of carry-on baggage, right? anyway, it has kind of been awesome being able to share these dark parts of me with him and for him to respond the way he has. it has also made me all the more aware of the fact that i still very much have deep-running scars, but through this whole “expressing my feelings -good, bad, ugly and awkward” thing that has gotten a lot of practice in this relationship alone, i am learning that problems can’t be solved or worked out if kept internalized. i was given a mouth and the ability to spew words from it. i best make good use of it, especially when it comes to letting my boyfriend know when i’m hangry. because we best get food right quick.

tuesday. tuesday i did something a little crazy(ier). i answered a listing on craigslist seeking a free-lance writer to join their small team of contributors for a local magazine with my resume and three writing samples. it’s a long shot, i know, but it scared me to put myself out there like that, and so i did it anyway. i haven’t heard back yet, but even if i don’t, i’ll know that on tuesday, july 31st, i did one thing that scared me.

wednesday marked august 1st. which, i mean, how on earth is it august already? and besides being scared that the year is moving way too quickly for the things that i had set out to accomplish to in fact get accomplished,  (say accomplish ONE more time. ACCOMPLISH), i was scared when i decided to email a blogger about this post she published (also on august 1st) about making the transition from blogging as a hobby to blogging as a way to bring home the bacon (the morningstar farms variety, obvi). i asked her for more advice and how to get started and how to approach companies about advertising on my blog and then showered her profusely with compliments (i feel like that is always a good idea to do). it was terribly forward of me but it has the potential to pay off in dividends.

to be honest, this isn’t the first time i’ve emailed her. i actually sent joanna (her name, btw) a message about a year ago to apply for an internship she had created for her blog a cup of jo.she’s based out of new york city, so you again, it was another long shot, but she had mentioned that she wouldn’t discourage having out-of-town residents apply, too. there’s a wonderful thing called “skype” that could certainly come in handy if the candidate was just too good to pass up! in the words of bieber, never say never, folks. turns out she did end up going with someone in the city, but was sweet enough to include in her response back that she had enjoyed reading my email and was flattered by my kind words. so not a total loss!

and that brings me to yesterday. and another repeat performance of contacting someone i already have in the past. well maybe not so much “someone” but rather “some people” or “the governing bodies” of a little site called hellogiggles.com. whoa. i just checked to see the date of said original correspondence and what do you know, i was off by ONE day. i sent my original email with a handful of submissions on august 3rd, 2011, yesterday was august 2nd, 2012. TRIPPY. anyway, they (“they” being the powers at be or zooey deschenel herself as i like to believe) had been all enthusiastic about this one post i had written about how awkward it is when you can feel a fallen hair on the back of your arm but you can never seem to locate it so you just end up looking like a spaz in your attempts at its removal, and said it would be posted in the not so distant future but to be patient due to editorial scheduling. well a year later, i’m still waiting on them to “check their editorial schedule.” and while i was, at first, a bit saddened by that whole broken promise thing, it has by no means discouraged me from submitting once again. and on the heels of learning that my sweet friend A recently had her article about the bachelor/bachelorette franchise published on hellogiggles herself, i figured that perhaps it was time to give round two the old college try (if she can do it, so can i!). so i emailed the giggles gals (as i lovingly refer to them) yesterday with a NEW batch of blog posts, ones that i think their readership might take a liking to. i received back their automated response, about how it takes time to sift through emails and read through submissions and to be patient for one to two weeks’ time. but i’m hopeful that my luck might be better this go around. so here’s to finding out before august 16th, 2012 and not august 16th, 2013 (thank you for your prayers and finger crossing in advance).

and now it’s friday (happy friday, btw)! in talking to my boyfriend last night and in recounting the above mentioned “scary moments” i’ve managed to surrender to this past week, i explained that i would try to focus my noodle-throwing on all things writing/blogging-related. and while that really is the overall goal, i would be remiss in not doing/saying/eating things that scare me outside of that realm, too. i don’t think i’ve done anything “scary” today so far, but i mean, the day is pretty young. i didn’t wash my hair this morning so i suppose that’s kind of scary, right? not really, that’s just a regular occurrence around these parts.

this weekend i plan on posting an actual excerpt from my book, so that’s pretty terrifying, and should take care of saturday or sunday (depending on when i post it). i might also try to log a few more hours tending to the book-writing thing overall. truth be told i took a breather from it this week since over the past ten days or so, i had found myself a bit depressed after spending hours “re-living” some of my failed relationships. i realize that there is growth through working through the pain of your past, but i couldn’t help but to allow said pain to slowly creep into my present, fearful that it would also dictate my future. so i stopped. and i’ve been diligent since then to pray and seek advice from friends, instead. and it has made all the difference. so i’m going to attempt to get back atop that proverbial horse with this renewed perspective and finish a few more chapters. so i suppose the fact that it could indeed happen again -that sadness- is a scary thought, but one of which i can certainly overcome with the Lord’s guidance.

so there you have it. a brief (yeah right) recount of my resolution to pretend that i’m incapable of failure, to do one thing every day that scares me (in and out of the literary arena), and that with enough thrown noodles, one is bound to stick.