so since we’re into full disclosure on here, i have to let you in on a little secret. i’ve started about three different blog posts this week only to stop about a third of the way through and second guess myself entirely. it’s this weird “eh, i’m not even sure this story is worth telling” insecurity that seems to wash over me as my cursor hovers over the “publish” icon and to be honest, it’s really cramping my style.

and i don’t think it’s because my life is any less exciting as it was some months ago when it seemed as though posts all but flowed from me like niagra falls, if anything, i have to believe the excitement (and busyness) level has increased ten fold (ok, maybe just five fold, but still). so really, what gives?

and after a few sleepless nights (truth be told it was the heat that was causing the lack of zzz’s, not this bout of writer’s block, but don’t think i haven’t spent a good portion of my day thinking about it) i think i might have figured it out…

my boyfriend likes to make fun of me sometimes (and by “sometimes” i mean “all of the time,” it’s okay, about 99% of the time, it really is warranted); specifically for my love affair with telling what we like to call “paper clip” stories. one evening, after i had recounted a tale that really had nothing to do with anything, he began to tell a story of his own. “the other day, i found a paper clip on the ground and i picked it up.” and just like that the “paper clip” story was born. 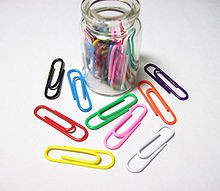 there are a lot of “paper clip” moments that occur in the life of yours truly. and if you hang around me long enough, chances are you’ve heard a tale or twelve. and i should probably apologize now for all of those times (i’m sorry). and for those times in the future because i’m bound to let it happen again (i’m sorry, again). but i’m kind of a share it all, all of the time kind of gal -the big and the little, the momentous and meaningless, so i’m not sure why i’m suddenly feeling so shy about it now.

maybe it’s because sometimes i feel as though i need to be a more refined version of myself (i am after all 27 now) and consequently, that this blog should be a reflection of said refinement. but of all of the words someone might use to describe me, i’m pretty sure “refined” isn’t one of them. come on, i’m the first one to chime in on a “that’s what she said” joke and i wear giant flowers in my hair during my pure barre workouts; i sing at the top of my lungs to the pop track on the radio and i use ketchup on everything.

and for the most part, i genuinely like being me.

but sometimes when i stumble upon a heart-felt article or thought-provoking blogpost where the author’s words all but penetrate my mind and soul, i can’t help but to feel my own efforts pale in comparison. “man,” i think, “i really need to step up my game.” and suddenly my recap of a weekend spent sweating and eating fro yo and the one about how i love j.crew sales and my boyfriend loves cars don’t seem so fabulous after all.

but if i’ve learned anything throughout this entire writing experience, it’s this: no one sets out to write a post worthy of dozens of facebook likes and a handful of comments. at least i don’t. they just kind of happen. i can venture to say that the most re-posted blogposts were ones that the bloggers themselves had no intention of being anything more than an outpouring of mindless musings on a weekday afternoon. and yet, within the confines of those stories lay something strong enough to struck a cord with a reader. and that reader forwarded it to another reader and so on and so on. and before anyone was made aware of the gaining momentum, this silly story had taken on a life of its own. it has happened to me once; and not even to the magnitude of some of my favorite bloggers, but its resonation with a few dozen friends and acquaintances was certainly something i never saw coming.

and i remember sitting down to write that post, my technique no different from the many posts that came before it, a seemingly simple “paper clip” story highlighting a few words of advice to my eighteen-year-old-almost-a-freshman-in-college-self about her pending years spent as a pepperdine wave. and just like that it wasn’t just a piece for my personal enjoyment, it was something to share in amongst those who had shared an all too similar experience while tending to their formative years on the malibu campus.

and when this happens, i’m not going to lie, there’s this pressure to deliver something just as witty and well-written the next go around. and the time after that, too. and i think i’ve done a pretty good job at providing some pretty darn good posts (the “doozies” as i lovingly refer to them), but i have also produced an equal number, if not more “wah wah” writings, too. but even babe ruth didn’t hit a home run every at bat, did he? in fact, the same year he broke the record for most home runs, he also struck out more times than any other player in major league baseball (come on, who am i to resist a good sports metaphor?). so i suppose that triumphs come with their fare share of failures, and maybe that’s what ultimately keeps us humble (or humbler); knowing that we had to take a few “practice swings” before the ball was ever smacked right out of the park.

so maybe it’s time to cut myself some slack; not worry so much about crafting a composition whose words leave readers inspired, but rather, simply focus on delivering tales that i would share even if the readership totalled zero. because at the end of the day, my writing has never been for anyone else. i’ve always just viewed this as an online diary that y’all were simply given access to. and while unlike a personal diary, i must proceed with a tad more discretion, i still reserve the right to share whatever is running through this pretty little head of mine. the “paper clip stories” and the ones a bit more poignant in nature.

because even if every last one of you stopped tuning into my daily recounts of the good, the bad, the awesome and awkward of yours truly, i would still post here anyway. because like i said before, it has never been about anyone else. and maybe that’s what i need to keep in mind from now on.

also, let’s be honest, mom and grandma (hi ladies!) would still read, so i would never truly be alone.