they say you should never stop learning; never cease to acquire one more bit of knowledge or one additional skill. and i couldn’t echo that sentiment more.

and while i may not be one of the thousands of students embarking on their collegiate journey today, i will say that these past few months have been as good as any to broaden my dexterity.

but before i discuss my newly cataloged skill set, some thoughts on the stubbornness of yours truly.

i wouldn’t categorize myself as extremely bull-headed, but i’m certainly not naive to the fact that there are simply certain occasions where i can’t help but find my heels dug in a bit deeper than normal. more often than not, these occasions have something to do with talents God just didn’t seem to grant me innate ability for (not that parallel parking is a spiritual gift, more on that in a moment). because if something doesn’t come effortlessly to me, then why waste time trying to make it happen (kind of like fetch)? i’d rather focus my efforts on honing my already-given gift repertoire.

but let’s be honest, this is like a terrible way to live, right? because who is naturally gifted ateverything? what’s that you say? justin timberlake comes pretty close? i know, i agree, too. but back to my point.

i will say there have been many an exception to this rule -i mean, you should have seen the first time i ever survived a pure barre class, it’s a wonder they allowed me to come back after the unfortunate sweat pool i left in the corner of the studio. but i suppose i channelled my stubbornness for good (not evil) and instead of throwing in the proverbial sweat-drenched towel, i have dedicated the last year and a half to perfecting my form and now even toy with the idea of getting certified to teach a class of my own. so you know, i’m not always this “eh, if i’m not good at it, i don’t want to do it” kind of gal.

but most of the times, i am.

so back to that parallel parking thing. i remember telling a girlfriend once that despite having a driver’s license for upwards of 11 years now, i still hadn’t mastered the art of parallel parking. she was quick to point out that i went to pepperdine (a school boasting about 75% street parking) and that in addition to earning a bachelor’s degree, a mastering of the art of parallel parking was included with tuition. welp, i should have asked for a discount then, shouldn’t i? but in all seriousness, my giving up on sandwiched street parking didn’t come without valiant attempts in my youth. the thing is, i’m a perfectionist AND a people pleaser (what a combo) and it always seemed that whenever i tried, there would be a line of cars behind me waiting to get by. and since, that whole lining up your tires and cranking the wheels, blah blah blah never warranted a successful park the first go around, i would start to feel so anxious, like i was somehow letting all my fellow drivers down by making them wait two point five, that i allowed my flusteredness to get the best of me and i would scream “never mind!” and promptly proceed to find a parking spot in a rogue lot somewhere, even if it was miles from my destination. i mean, i wanted the exercise anyway, duh. but when you’re walking a good 20 minutes just so you can avoid having to parallel park and it’s raining and you forgot your umbrella, you might want to consider getting over your stubbornness and just learning how to park your car in a tight space already.

and then this little thing called being in a relationship happened. and i quickly learned that the wonderful guy from said relationship just so happened to live in an apartment complex where street parking would be at a premium. so unless i wanted to hike two or three blocks each and every time i decided to pay him a little visit (see also, every weekend), i figured it was high time i get over myself, my fear of parallel parking and in all honesty, my fear of not being good at something on my first try. and turns out, my guy needed a refresher on parallel parking, too. so on a random saturday afternoon, we turned to the best teacher there is for learning how to perfect a skill: google. and up popped an, albeit cheesy, very well done video with step-by-step instructions on how to properly parallel park. and we sat mesmerized by the seemingly simplistic nature of a task i had for over a decade cowered from in fear. and after years of fruitless attempts had left me with a despondent spirit in the driver’s seat, upon said video’s completion and upon witnessing firsthand my boyfriend successfully put the tools learned to the test that same evening, i made a promise to myself: should an opportunity to parallel park present itself on my next trip to his humble abode, i would take it.

and well what do you know? present itself that opportunity did the following weekend. and as i locked eyes with that open spot and recalled to memory all of the sequential steps youtube had so graciously taught me just seven days prior, i did my best to breathe (this all seems so dramatic, but you don’t know how deep my abhorrence for parallel parking stems) and remind myself that if “at first i didn’t succeed, to try, try again.” and it’s a good thing i took a moment to do a little self-talk because turns out, i needed about SIX “tries again” to successfully situate my little elantra between those car bookends. but regardless of how many times i had to shift between drive and reverse and drive again, when i threw up the emergency break and turned off the car, a little part of me swelled with pride. i did it. i had finally conquered this crippling (and yes, pretty irrational) fear. this fear that had resulted in many a frustrated car ride and had only resulted in many unnecessary miles trudged by yours truly.

and since that first parking success, i have gone on to have a half-dozen more just like it. and instead of six tries, i have gotten it down to just one. a couple of occasions on a pretty steep hill, i might add (i know, horn = toot, tooted). and aside from the fact that i just feel like a more confident driver overall and it feels equally as awesome to have realized that i am more capable than i all too often give myself credit for, i’m just really pumped about all of the time i’m going to save by not having to hike from three streets over to his apartment. 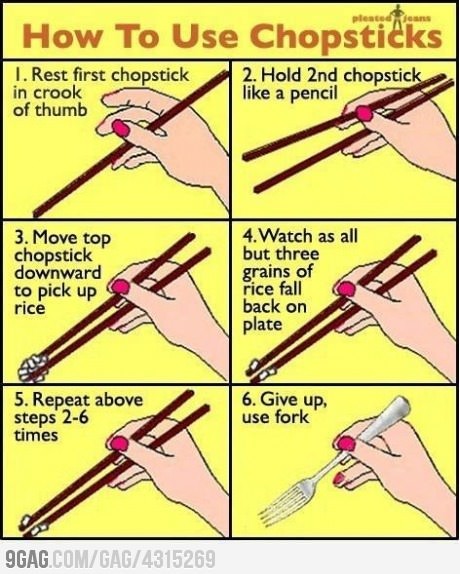 and since there isn’t a seamless transition from talking about parallel parking to my love for sushi, i’ll just say that i’m going to give you an example of a newly learned skill that has to do with, you guessed it! sushi.

sushi: a new(ish) addition to my consumption repertoire, but one that i have come to greet with open arms. but despite the frequency of my raw-fish-eating ways, i have been remiss in embracing the japanese delicacy in its entirety. because until yesterday, i chose to employ one of two methods of getting those little seaweed-wrapped-rice bites from the plate into my hungry belly –fork or fingers. i know, i know, sushi eating with a FORK? who would do such a thing? well for one, a girl who can’t use chopsticks to save her life. or you know, a girl who can’t use chopsticks to feed herself (notice how i’m not even addressing the whole eating sushi with your fingers thing).

ironically enough, my boyfriend’s tutorial in chopsticks 101 that he administered during our after-church sushi lunch yesterday, was not the first of its kind. on our very first “is it or is it not a date” coffee turned sushi date, he also attempted to teach me how to use the overgrown toothpicks to ease in my sushi plate-to-mouth transport. but unlike that evening in march, yesterday’s lesson was actually successful (er, successful enough). sure, not every execution was mess-free (thank goodness for extra napkins), but of the some ten rolls i ate (is that a lot? if so, i don’t really care, i was hungry), i think eight of those were eaten at the mercy of those troublesome sticks [insert applause here]. and aside from the joy i felt when i finally maneuvered those babies well enough to warrant that i didn’t in fact leave that lunch date just as hungry as i arrived, i think the thing i enjoyed most was watching just how patient and encouraging my guy remained despite my growing frustration and my ever-growing snarky self-deprecating commentary. instead of allowing me to simply give up (as i had so many times in the past), he remained steadfast and well, in a way, stubborn, too. but his stubbornness was different than mine, for it stemmed from a desire to ultimately help me succeed. it’s funny, he tells me often just how much he admires my patience, but after days like sunday (and every other time i get overly emotional about something or make a mountain out of a mole-hill), i can’t help but think, he’s the patient one.

i mean this has basically become one long sappy blogpost about how great my boyfriend is, hasn’t it? whatever, i’m not even apologizing for that, because, newsflash, he is great.

but boyfriend-gushing aside, it’s more about the fact i’ve let some fears (as irrational as they may be) get the best of me and played the victim to my stubborn ways for far too long, too. there are still many things i have yet to “conquer” (i am by NO means ready to go whale watching any time soon), and even more skill sets i have yet to master, too. but i won’t let these mini milestones go by without taking the time to relish in them a little bit, first. because i have realized that learning new things now is totally just as awesome as it was in school (nerd alert), and actually more fun because unlike geometry, i’m actually using these concepts in every day life.

so add “parallel parking champ” and “chopsticks-using guru” to my skill set repertoire, will you? or at least check them off of the “absolutely will not do” list i’ve been compiling for so long. i’m off to set my sights on a new endeavor: learning to drive stick.

let’s just hope the boyfriend’s patience is strong enough to survive that lesson.