so i don’t normally go into great detail about the special little dinners my guy and i get treated to in exchange for my writing services, but we had a lovely one at 25 forty bistro & bakehouse on saturday that i’d thought i’d share. plus i managed to take photos of every single plate of food we consumed so i mean, why not make you all drool a little bit, right?

our reservations weren’t until 7:30 p.m. so after a day spent in the salt water and sand, we gussied ourselves up and headed to old town for a little shop perusal and a pre-dinner beverage. after cooling off with a couple of iced coffees, we strolled hand in hand along the mexican restaurant-lined streets, weaving in and out of the occasional specialty store, filling our lungs with the scents of pico de gallo and homemade tortillas. and just before we were all but ready to join some kind strangers for a helping of their chips and guacamole, it was time for our dinner to commence!

i mean, let’s be honest, how cute is this restaurant? 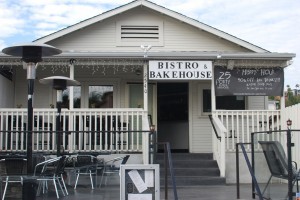 adorable, right? equally as adorable was the fact that my name was etched on the floor directly in front of our reserved table, making me feel not only super VIP but also very much a fan of the idea of using chalkboard paint on every inch of my home (don’t worry mom, i’m not acting upon said affections just yet). 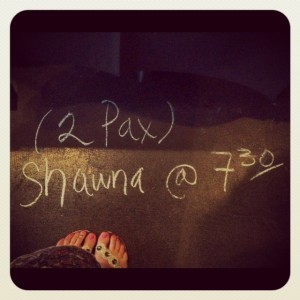 we were brought waters in stemless wine glasses (we opted for sparkling instead of the habitual flat, a nice little change and a choice that left me feeling quite fancy) before finally being greeted by our server who was eager to assist us in selecting the dishes that would make our evening’s culinary repertoire.

now the way my guy and i usually approach the menus at any given restaurant is three-fold. we generally begin with a few appetizer plates; making sure to sample a variety of the restaurant’s offerings. if the small plate options are simply too numerous and too scrumptious-sounding to settle on just a few, we conquer them in shifts -starting off with two or three plates at first blush, returning for two or three more (did i mention we are both essentially human garbage disposals?) once the server comes to check on us thereafter. 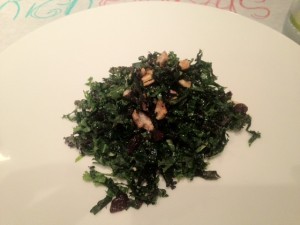 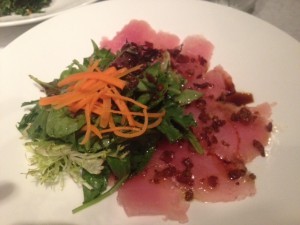 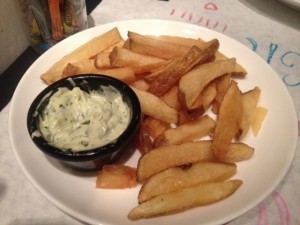 yes there may or may not have been a bacon bit or five consumed and yes i did in fact eat some of those fries. so for all of you naysayers or judgers, just know, on occasions where someone is comping your meal, you throw caution to your food allergies and restrictions for the evening and live a little.

to the entree course. with maybe the exception of one of our first restaurant adventures, whenever we are treated to these meals, i always set my sights on the pescatarian offerings. in my humble opinion, you can tell a lot about a restaurant based on their fish preparations. so to be as authentic of a food critic as i can be, i assess the chefs by sampling their pursuits of the meat of the sea. on the contrary, my guy is a red meat champion. and if there are truffles involved? fuhgetaboutit. so in true “us” form, when it came to selecting our main courses, i chose the catch of the day -a red snapper prepared in a mediterranean style and served alongside organic vegetables and mashed potatoes and he, the bistro filet served in a, you guessed it, truffle sauce. 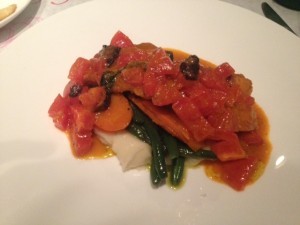 hers: red snapper, carrots, green beans & zucchini served atop mashed potatoes and in a mediterranean-style sauce. 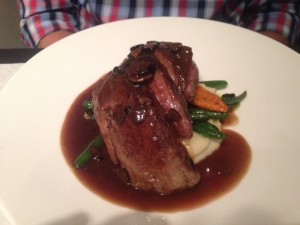 his: bistro fillet served over organic veggies and mashed potatoes and bathed in truffle sauce.

it’s important to note that though he thoroughly enjoyed his steak, after one bite of my meal, he was left wishing he had mirrored my order. y’all, i have yet to have a fish dish let me down! so word to the wise when eating out, the sea has a lot of delicious creatures in it, give the red meat a rest for an evening and opt for nemo (ooh, too far?) instead. also, how dapper is that shirt he’s wearing? he obviously has a really great style consultant…

and if you thought that after so much food we wouldn’t possibly have any room left for dessert then you would be terribly mistaken, my friends. i mean, do you think we could, in good conscience, just sip our cups of espresso without something to satisfy our sweet-tooth? never.

so out came the dessert menu and a visit from the chef and owner, himself. and while he insisted we try his take on crepes suzette (the restaurant’s most popular dessert dish), i had my eyes set on another beaut: the chocolate cake with peanut butter mousse. i mean, they had me at peanut butter, duh. and you know, no offense, crepes, but one gander at this plate and i knew we, or rather i, had made the right election (boyfriend knows better than to challenge my dessert choices, especially when there is pb involved). 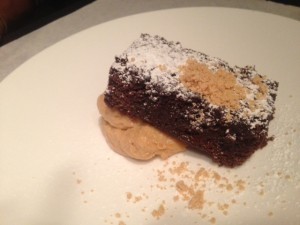 also, the whole chef-coming-out-to-introduce-himself-and-thank-us-for-coming thing never gets old. i mean, like i’ve said before, though i may non-chalantly refer to these dinners as “work” or “arduous” in an OBVIOUSLY sarcastic-nature, i know this whole gig is a direct gift from God. each time we show up to a restaurant and they all but roll out the red carpet for yours truly and my guy, i still have to pinch myself multiple times throughout the meal. it’s just like, how is this my life? especially for a gal whose idea of culinary adventurism was ordering oatmeal with berries (crazy!) instead of just opting for the customary brown sugar crumble. i’ve come a long way, baby.

and you would think our waistlines would have stretched a long way, too. but we’ve managed to remain relatively unscathed. maybe that’s because we do our best to get in ample cardio on the day of the dinner itself and the day after, too. and maybe the day after that, as well.

but if i’ve learned anything from this incredible opportunity, it’s that when someone offers you complete culinary freedom, you take it for all its worth. because things like this don’t come around often so you best make the most out of them while they last. plus, i mean, it gives me a reason to keep buying really cute date clothes.