file under: “things i’m faced with as a solo-living female but now know i’m totally capable of handling like a champ (with only a very minor freak-out).”

okay so yesterday evening began as any other. on my way home from pure barre, i sang loudly to my needtobreathe pandora station as i sailed through the green lights along rancho santa fe road, finally arriving in the sweet sanctity of suburbia with daylight to spare.

i retrieved the mail and pulled the hyundai into my garage, ready to bring my now empty trash and recycling cans in from their current curbside home. and as i set them in their designated spots on the west side of the garage wall, i saw something out of the corner of my eye.

“man, that’s a really big earthworm,” i thought to myself.

and then i realized that this was no obese night crawler. for surrounding its coiling noodle-esque shape was spattered blood. what the?

and then i saw a head.

and then i realized what the squirming worm-like thing actually was.

it was a tail.

a “yes, i’m still moving because i have nerve endings and haven’t quite figured out how to turn them off” TAIL.

and it had been severed (quite dramatically with the presence of such blood) from a poor little unsuspecting lizard.

in cold blood (get it? reptiles have cold blood? too soon, too soon).

i am a murderer, basically.

and if that realization wasn’t scarring enough, an assessment of its location revealed that it was right in the line of fire -once i closed the garage door, there was a good chance (a GREAT chance) that i would not only add insult to injury (crushing it a second time? i mean, obviously i have no heart), but also trap portions of that little reptilian body inside the garage itself.

the latter thought alone sent shivers up my spine. i actually did a heebie jeebie dance not once but twice before finally taking action. and if you aren’t familiar with what exactly a “heebie jeebie” dance entails, i’ll tell you. it’s basically a gallop in place followed by a shoulder shimmy and a high-pitched squeal.

and then i thought, well, there is no one around to help you, shawna. as in, there are no males around to take care of these kind of “frogs and snails and dead lizard’s tails” moments. [also, i just love that nursey rhyme] so either you’re going to have to (wo)man up and take care of business or you’re going to have to start parking on the street and enter/exit the house through the front door. and the latter just sounded inconvenient so…

i took a deep breath and looked around for something to remove the carcass from its current resting place. a dust pan! it was just the thing. i stood as far as humanly possible away from the scene of the crime, my arm stretched at its capacity as i positioned the lip of the pan under the tail.

and there it went, flying through the air, only to land about ten feet away, in the middle of our (my neighbors and my) communal drive way. and then without thinking too long about it, i moved on to the body itself. that took a bit more shoulder strength, but with the right amount of leverage, i managed to send that part flying, too. and yes, about the same amount of distance and almost nearly in the same location.

i know, it wasn’t the most effective way to discard of said contents, but at least it was no longer in my garage where its little ghost was sure to haunt me all night long. also, i assume this lizard had a british accent much like the geico gecko, and i suppose if i was to have a lizard ghost haunt me, i would at least want him to have an exotic accent.

needless to say, i felt quite empowered after the entire endeavor. still a bit shaken up -i mean, i had to WIPE THE LIZARD GUTS OFF THE DUST PAN WITH A PAPER TOWEL afterwards, but kind of bad-a$% in a way, too.

sometimes i think, my oh my, what the heck? i’m so not strong enough/equipped enough to do such, such, and such, i just wish my dad were here to take care of it for me. like when my washer breaks mid-rinse cycle or i have to replace my modem for my high speed internet service (both actual things he’s had to come over to my condo to do).

but then there are other occasions when i go, i mean, what if i at least tried first? maybe then the emergency call wouldn’t have to be placed at all? it would at least save him a 12 minute drive. like when the smoke detector’s battery is low and its chirping makes me want to punch someone in the left kidney (a simple fix, i just stand on a chair and remove said battery). or you know, when there is a severed lizard in my driveway.

these are the times when i remember that i am woman, hear me roar.

these are the times when i remember that i’m one tough/resourceful cookie when i need to be. sometimes inside this sweet exterior is the heart of a lion. or at least a kind of aggressive house cat.

also, i really hope someone has taken care of the remains by the time i come home from work this evening. because while i had the strength to handle things yesterday, i’m not superhuman, i will cry like a baby if i have to get out my dust pan a second time. 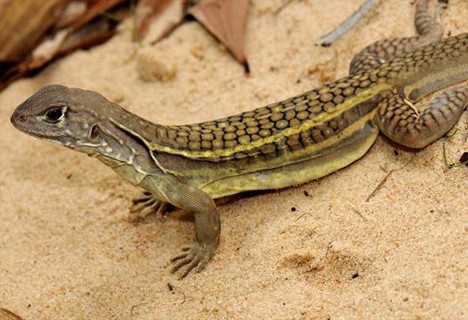 lizzie (or his distant cousin) living life fancy free. PETA probably already has a warrant out for my arrest.