before i write a recap to end all recaps about my bridesmaiding adventures in savannah, i thought it only fair to start off with a story that occurred on the flight over to georgia wednesday evening. because really, what better way to commemorate a weekend centered around the celebration of true love than with a story of the always interesting, never a dull moment, and usually misadventurous love life of yours truly. i know, you thought these misadventures had traveled to the great abyss, never to be visited again, didn’t you? think again, they are back and better than ever.

i mean, it never happens to me. i’m usually chatted up by a gent at least 20 years my senior who is both quite forward and has an affinity for discussing topics the opposite of “appropriate” in nature (see also: INappropriate). so when an adorable late twenty-something with a tattoo(!) approached me as we were lining up to board our red eye to dulles international, it seemed as if i might finally have my rom com moment.

unlike my habitual utilization of southwest airlines, i flew united on this particular occasions -the only make note of this detail is for the fact that contrary to southwest’s open seating, our elected spots were previously assigned. so though he muttered “see you in there!” as he proceeded to the gate to board the plane, chances were, contingent on his seat placement, his statement would probably prove null in void (i suppose i could happen upon him on one of my many ventures to the lavatories, right?).

but in an ironic twist of fate, or maybe, not some much ironic but more so, just kind of awesome twist of fate, as i made my way down the aisle toward 24C, i caught the gaze of my flirtatious fellow traveler. he was situated just THREE rows ahead of me and as our eyes met, he quickly volunteered the now vacant seat beside him. wait, what? like i said, this never happens to me (and you guys, i’ve traveled quite extensively this year). but being the rule-follower that i am, though his invitation was one i was quite happy to accept, i knew that seat 21E belonged to another. so i made him a deal -i would opt for my previously assigned seat for now, but with the caveat that as soon as 21D (he didn’t have a name at this point, i mean, he obviously had a name, but you know, i didn’t know it at this point in time)’s row mate arrived, he would request that he/she switch places with me (i mean, who wouldn’t want an aisle seat?) and i would be able to take my proper place next to the object of my affection with a clear conscious.

i waited impatiently as passengers continued to file into the plane. finally, the mystery flier made her way onto the aircraft and planted herself in the elusive seat 21E. a few minutes passed, yet no seat change transpired. that’s what i get for being a rule-follower, i thought.

moments before take-off, the gent finally looked back to face me. he began mouthing something, using hand gestures to support his muffled words. now i know i may have an awkward ability to eavesdrop and simultaneously participate in more than one conversation at once, but a lip-reader, I MOST CERTAINLY AM NOT. but when the gal to his right made no indication of relocation, i deduced quickly that we would unfortunately not be sharing the almost five-hour jaunt to D.C. in each other’s immediate company.

so i concocted a plan. i’d channel my inner nine-year-old self and get his attention in the only way she (the nine-year-old) knew how. i’d pass him a note.

“confession: i’m really bad at lip-reading. did i miss my opportunity?”

and pleased with my ability to feign calm, cool, and collected-ness, i folded the piece of paper into quarters and awaited the perfect opportunity for its exchange. soon thereafter he arose from his seat, his eyes set on the lavatory at the back of the plane. now was my chance. on his way back down the aisle, i would non-chalantly slip the message into his hand, maybe even accompany said exchange with a wink (because winks are so sassy). but as i focused on calming my now rapid heartbeat down to a healthy level prior to his return, i lost my focus and before i knew it, he had already passed me by and with him, the opportunity, too.

i entertained the idea of handing my brief love letter to the flight attendant on her next visit through the cabin, but the thought of her accidentally delivering it to the wrong individual or somehow dropping it amongst the bag of complimentary peanuts made me more nervous than delivering it to 21D myself, so i simply accepted my fate and slipped the folded loose leaf into the pages of my book instead. oh well. that’s what i get for not seizing the the offer at first blush.

the rest of the flight was filled with equal parts dozing in and out of consciousness and staring at the back of 21D’s head. somehow, i figured that if i stared at it long enough, he would somehow feel my eyes burning into his skull and get the urge to come chat with me. and yes, that’s JUST as creepy as it sounds.

but lucky for him, my head-staring was interrupted by our long-awaited arrival into D.C. i knew my connecting flight wasn’t for another two hours so i took my time exiting the plane (well as much time as i could as people were trying to ramrod you out of the aisle, i tell you, i did not expect them to be so alert at 5:56 in the morning!), but seeing as our seats were in such close proximity, i was still able to keep tabs on 21D out of the corner of my eye.

upon exiting the plane, i immediately checked the gate for my next flight leg on the “departures” monitor. gate A5B, it read. seeing as i was currently standing in terminal C, i knew there would be a bit of walking in my immediate future, so i followed the designated signs and embarked on my journey backwards in the alphabet.

through the sea of travelers, i once again caught sight of him -his blue t-shirt glowing like a beacon in the night. at this point, i may or may not have increased my casual strolling speed to that of a brisk walk. turns out, terminals A, B & D as well as baggage claim and ground transportation were all in the same direction, so when i caught up to him and boarded the same shuttle as he, it wasn’t so much stalkerish as it was coincidental. or as i liken it, the universe’s way of giving us a second chance.

as he found a vacant spot on the shuttle, he looked up to meet my gaze. he smiled and i made no hesitation as i walked in his direction before finally settling into the seat beside him. alright opportunity, i’m seizing.

“hi, i’m shawna,” i said as i stuck out my hand. he took it as he answered back, “i’m [names have been removed to protect the innocent, but let’s just say that he may or may not share the same nomenclature as that famous guy who lost a ton of weight on the subway diet].”

from there, we managed to have a pretty extensive getting-to-know-you (getting to know all about you…) session despite our approximately three-minute window (the length of the shuttle journey). i learned the significance of his sailboat forearm tattoo and was even shown photos of him and his three brothers (who all have the same tattoo in different places; an homage to their father who was a sailor and passed away) from a recent wedding they all attended. we exchanged our reasoning for our travels (he was in san diego to film a conference and on his way back home, i, obviously, en route to savannah for a wedding) and he even made a joke about how he hates it when his bridesmaid dress gets all wrinkly when he stuffs it in a carry-on (oh hey, sarcastic humor). basically it was the most perfect conversation two can have when half-asleep on a shuttle between terminals C and A. and a conversation that offered just enough detailed information to warrant a good old google search once we parted ways (i mean, hypothetically).

and part ways we did, soon after our shuttle bus arrived at its destination. and as he made his way toward ground baggage claim/transportation, he wished me safe travels and a wonderful time at the wedding and i returned the favor -except without the wedding part, obviously.

and i eventually arrived at my gate with an hour and some change to spare, content, but a little defeated, too. darn my stupid rule-following ways. i mean, duh, chances are, 21D is not my soul mate. but in those three minutes we shared discussing sailboat tattoos and bridesmaid gowns, i caught a glimpse of what those five hours on the plane might have produced -good conversation, maybe a witty comment or eight, and well, if anything, a pleasant distraction from the monotonous white noise of the airplane soundtrack itself (a combination of people snoring, seat belt sign’s dinging, and the beverage cart making its way down the aisle).

anyway, that’s how my weekend in savannah began. with an almost rom com moment for yours truly and a reminder that sometimes, following the rules is kind of a buzz-kill.

we’ll always have the shuttle, 21D. 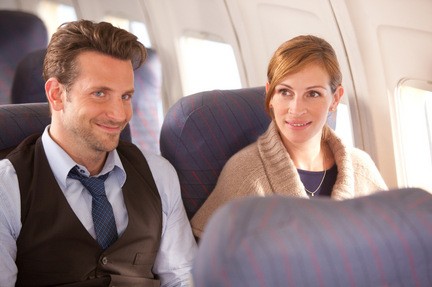 i mean, this could have been us.