i’m not quite sure how long it has been exactly, but i can tell you that it has been a good long while since i had driven the 405 en route to those grounds i used to regularly stomp. but with a free weekend and a partner-in-crime to accompany me (and house me for the night) on all of my malibu musings, i packed up the overnight-er, slipped on my shades, and powered through my venti iced coffee as i made my way up the coast early (i mean early) saturday morning.

first of all, the 5/405 death drive is FAR less severe when navigated at an hour almost too early for the sunrise.

secondly, the entire weekend was centered around food and/or adult libations. which, i mean, is pretty much how i live my life on any given getaway (“so, how many of my favorite restaurants can we visit in the X amount of time i have here?”). for this trip, marmalade was an obvious gimme. the rest of the meals were just gravy. and by gravy i mean they were free(ish) so you know, obviously we were going to take advantage of that.

E works for a really swanky restaurant in the ‘bu (yep, i just called it “the ‘bu,” don’t worry about it). and from the welcome we got when we arrived for our morning brunch date, it was more than apparent that she doesn’t merely “work” there, folks. she’s also kind of a big deal, too. and if you’re going to be a plus one to anyone, it should definitely be to the kind of a big deal. just saying. because then you get treated to a table with views like this: 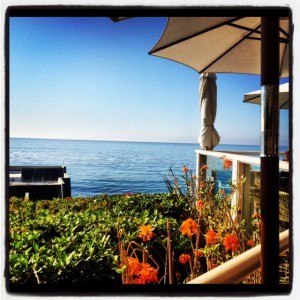 which aren’t awful. quite the contrary in fact. not only that, but your server isn’t terrible to look at (see also: AWESOME to look at) and you can even ask for substitutions -like no cheese please on the egg white omelet and seriously please make that strawberry lemonade vodka thing super weak because miss light weight champion of the year is going to have to pace herself. 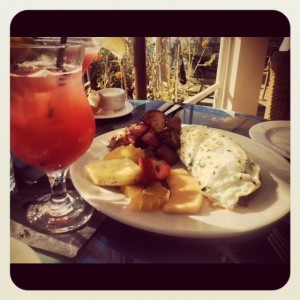 get in mah belly.

when you’re her plus one, your overall experience is just plain dreamy. and it also serves to remind you that it’s pretty cool to see how your bestie is killing it in her career. and no, not just because of the perks it gets me. those are just icing on the [gluten-free] cake. 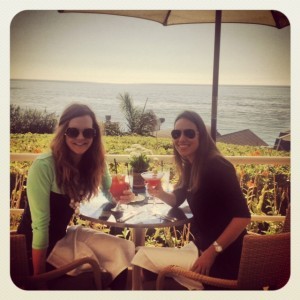 also, hi B! what a fortuitous run-in we had! it was lovely to see you and duh, thanks so much for reading the blog.

from brunch, we continued our “that’s SO malibu (just like “that’s SO raven”) weekend with a trip to the newly (and by “newly” i mean that they did it a few years ago and it has just taken me this long to explore it) renovated country mart, or excuse me the lumberyard where we perused through boutiques we’d have to sell a limb to afford, drooled over the perfectly color-coordinated j.crew (might as well be a showroom) store, and spotted jonah hill (a celeb sighting! my weekend could have ended here and been a success) enjoying some chips and salsa at a local cantina. i actually have no idea if he was enjoying chips and salsa, but who goes to a cantina and doesn’t order that? also, he was wearing a dodgers hat. we were not stealth in our oggling of him. whoopsies. 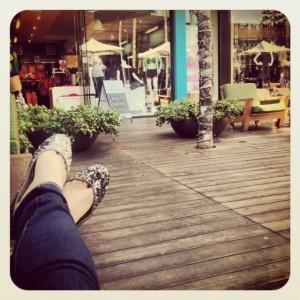 in addition to seeing an academy award-nominated actor (i mean, let’s give credit where credit is due), we also saw this fall photo op. 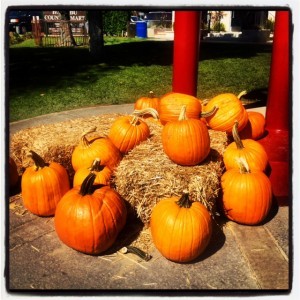 E offered to take my photo atop one of the hay barrels. i immediately declined after seeing a gal with her LAP DOGS pausing to do the same. but the pumpkins were festive, so i took a photo regardless.

following a few more laps around the colony, enough room had been made in our stomachs to warrant our second meal. so off to malibu country club (my former place of employment) and to their picturesque adjacent outdoor wine bar we went.

it really does sound as if we just boozed it up all day. i assure you, my “boozing” does not look like a normal person’s boozing. for whatever that’s worth.

i’m not gonna lie, though it has been five whole years since i collected my last paycheck from MCC, one step in the pro shop and the time lapse all but disappeared. there at the helm was my beloved C, a gent i’ve all but seen grown and mature into a pretty neat young man (i say this like i’m sixty, C is only three years younger than me) and in the administrative office, J, still keeping all of the finances in order. visits with both of them only served to remind me how much i truly miss that place. from nostalgia-ville, E and i traipsed over to the on-site wine tasting room (“room” being a dreamy outdoor area complete with twinkly lights, sun umbrellas, and cobblestone walkways. so not really a room at all). whatever you want to call it, just know that it’s perfect. 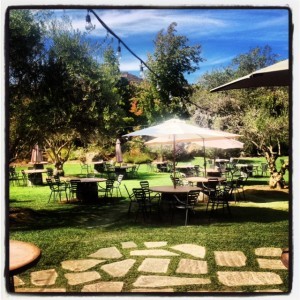 with the most hilarious (but really, he’s actually a stand-up comedian) sommelier(esque) to serve us, E and i sampled a few of their signature vintages. red for her, white for yours truly. it was probably a good thing that no varietal in particular really tickled my fancy because otherwise, i may have had to find a quiet little spot under one of those tables to sleep off the hangover. luckily, my hummingbird-sized sips kept me sally sober for the afternoon. 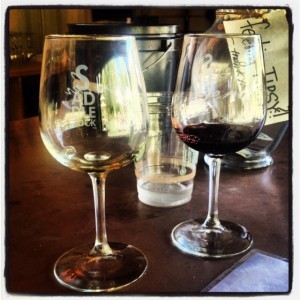 following another catch-up sesh with a former co-worker as well as some major wedding decor-judging (and a full assessment of the bridal party; survey says, there were a few eligible bachs in the bunch, but sunglasses really do hinder proper hotness meter results), we finally bid adieu to my former home away from home. bittersweetness for sure. but with the comfort of knowing that time’s passage has by no means hindered my connection to this place and its people…take it away, arnold -“i’ll be back.” (but really, i will, if only to hang out in the pro shop with C, also, if he’s reading this, i really hope he’s blushing right now).

with MORE food in our bellies and our palettes properly quenched, we took a pit stop at our alma mater to see a few friends and to pay our good little alumnae dues (it was waves weekend afterall. also, nothing makes you feel really old like watching the class of 2016(!) perform their lip sync sketches for spirit points amongst the greek groups) before making a bee-line back to brentwood for jammie time, trader joe’s snacks (would you expect anything else?), and not one but TWO rom coms. compliments of our friendly red box providers, we turned in for the five year engagement followed by what to expect when you’re expecting. we figured, first comes love, then comes marriage, then comes a movie with an ensemble cast of everyone in hollywood talking about baby carriage(s). while i was very much alert (come on, i was snacking for about 3/4 of the movie) for the first flick, E quickly informed me that i PASSED OUT in the middle of the second one. i blame the wine. and the 5:30 a.m. wake-up call. and the fact that i’m shawna leeann and i am actually an 82-year-old living inside a 27-year-old’s body. so i really can’t help it. i woke up for about the final ten minutes(ish) or so and was promptly encouraged to go to bed.

don’t have to tell me twice.

after enjoying a peaceful slumber, i arose to my alarm at around 7 a.m., got church-ready, and caravanned with E out to malibu for first service at malibu pres. there may or may not have been a obligatory starbuck’s run involved, too. an un-caffeinated shawna is not a gal you’d like to meet (she ranksjustbelow a hangry shawna). anyway, the service was just as wonderful as i remember them being in my youth (“youth” can apply to the nine-years-my-junior-self). plus TWO more celeb sightings -the one and only zeke braverman (or you may know him better as coach) and ricky schroeder. i know, just go imdb the latter. you might recognize him when you see his cute mug.

then, the piece de resistance (there are accents over some of those vowels, it’s french after all) on a perfect rendezvous in the ‘bu: a trip to marmalade cafe. the site of MANY MANY MANY a meal in my days as a wave and home to some of the best breakfast fare around (see also: home to the best lunch fare, dinner fare and afternoon snack fare around, too). i had, wait for it, oatmeal (shocker) and a few more cups of coffee for good measure. when E and our fellow pdine alum, H, finished our meal, it was time for our tricycle to become a bicylce once more. 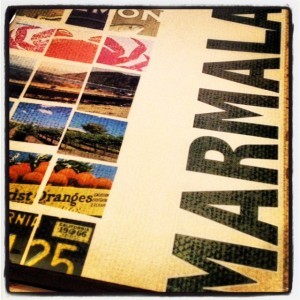 that’s a terrible analogy. obviously what i’m trying to say is that after brunch, i began my journey back down to san diego. but you know, metaphors are just more poetic.

anyway, i said goodbye to E and H (i love making new friends) and scooted myself right down the 405 at a pleasant (and quite unusual) speed. i even made it home in time for laundry, afternoon coffee with a gal pal, and BOTH sprouts & tj’s runs. the perfect ending to a perfect weekend.

“thank yous” and “you shouldn’t haves” to E (gosh, i love you), E’s place of employment, my former place of employment, jason segel for making the five year engagement highly entertaining, the celebs we spotted for making an appearance in the ‘bu long enough for me to indeed spot them, and marmalade cafe for existing in general.