i would venture to say that there is nothing better than slipping into your most comfortable pair of over worn sweatpants after a long day. i mean, sure, stumbling upon a project runway season 2 (by FAR the best season) marathon on tv or maybe realizing that the sweater you’ve been eyeing is now 50% off and available in your size may come close, but there’s just something about being comfortable at the tail end of an arduous afternoon that really can’t be beat.

comfort. we crave it. most certainly in our clothes, but, well, at least for me, in our relationships as well.

i used to think comfort was a bad thing (again, not so much in the clothes, but in relationships). comfort led to apathy. apathy led to disinterest. and well, disinterest led to splitsville. and while you should never let your relationship reach a plateau, continually cultivating an element of surprise isn’t always easy, either. because that’s not real life. yes, of course, there should be grand gestures -love notes snuck in lunch bags, surprise flower deliveries at work, and if he’s really a good one, that pair of earrings you had been eyeing in the window at the jewelry store. but those aspects alone do not a sustainable relationship make. there are merely a part of it. the other parts, the seemingly not so glamorous parts, come when there IS a comfort level that is reached between the two parties involved. the comfort of knowing that you are not only yourself but a better version of yourself when in the presence of your beloved. there are no airs, no facades, simply the genuine ease of knowing that your man accepts you as you are, and you him, despite your flaws and even because of them, too.

and maybe that’s why i’ve been so fearful for it since the beginning. because in order to obtain the comfortable, you have to first indulge in the vulnerable. and that, my friends, is scary as heck. but man is it ever so necessary. because before you can put on those sweatpants, you have to first remove the existing layers. it’s the payoff, i suppose.

but there’s this pressure. to somehow avoid the comfort in love. in fact, i’d venture to say that we put too much weight on keeping the spark alive. ensuring that we don’t actually reach that level of comfort. and obviously there is a grand canyon-sized difference between being comfortable in a relationship and getting comfortable in one. the former simply means that you are free to be the most authentic version of you sans judgement and fear, and the latter leads to complacency. so focusing on navigating between the two is crucial. but again, i say, there is something to be said about a relationship not merely surviving on the pomp and circumstance. there is something to be said about the couple whose love is based on more than standing outside windows with boom boxes and spontaneous song and dance numbers in front of the entire school (yes, i’ve watched many a rom com in my life). there is something to be said about the bond that is cultivated over knowing that his eye twitches when he’s tired, that he prefers raw carrots over cooked, and that even though he may not say it every time, he really does appreciate you picking up his dry cleaning every week.

i stumbled across an article a few months ago that i couldn’t help but to find myself nodding along to as i scanned its contents. of course, i’m not married, but you know, i hope to be someday. and i can’t help but to think that these sentiments will always be present in the back of my mind when that day finally comes. because while i’ll certainly want an exciting love (and life) filled with plenty of adventure, i’m pretty sure this “boring” love sounds pretty darn fabulous, too.

…We rarely hear about the little acts of love that exist between partners, where there are no plot twists or last-minute obstacles. There are few films, few books about a woman who packs a lunch for her husband every morning and cuts the crust off his sandwich, or the man who works an extra job at night for two years so his boyfriend can attend law school, or the couple who lies in bed at night and asks each other how their day was and really listens. Sure, that might be a component of the story, but it is sure to be drowned out by the conflict and the thrill that we want to see. And there is nothing wrong with that, we like excitement. But sometimes it’s hard not to miss the attention paid to the little, unglamorous acts of love that make up a true partnership.

…I want to hear about the thrill of the safe, the glowing feeling that consume us if we only stop to consider how magical and how precious it is — someone loves us for who we are, in all our forms, at every time of day. Someone wants to be there for us when it isn’t easy, when it isn’t convenient, and when the electricity of the new has worn off. This “boring” love, as we can sometimes consider it, is only as mundane or as familiar as we allow it to be. Sure, falling for someone is wonderful. And yes, breakups can be the inspiration for a million new beginnings, but the love that exists between them — if it can last — is more powerful with a whisper than the rest of it is with a scream. (via)

i think the most powerful statement in this entire article comes in the final paragraph: “i want to hear about the thrill of the safe, the glowing feeling that consume us if we only stop to consider how magical and precious it is -someone who loves us for who we are, in all our forms, at every time of day.” i mean, reduced to its purest form, isn’t that what true love is? the comfort of knowing that you are admired for every single last layer of your life’s proverbial onion.

the comfort. see, there it is again. that intangible sensation in a relationship where you are able to simply be.

you may or may not know this, but metaphorically speaking, my life’s backseat is filled with a bit of extra baggage (it’s really cute baggage, in a fun polka dot pattern, but it’s still baggage nonetheless). and well, until i have to unpack it, i kind of forget it’s back there. recently though, it became wonderfully necessary to make room for a few additional blessings in my life. so you know, that meant rearranging things a bit. [i’m really committed to seeing this metaphor through, i promise i’m almost done.] and it’s funny, because for as big as it is (the luggage) and for how instrumental it has been in shaping me into the gal i am today, i all but forget about it most days. most of its contents happened so long ago and i am so much a more restored and self-aware version of myself that it almost seems unproductive to revisit it. but like i said, due to some unforeseen blessings, that baggage has required some unexpected attention as of late.

and therefore, i set off on exposing each bags’ contents; releasing the skeletons from the proverbial closet and revealing, ultimately, the rawest and most vulnerable parts of me. and i mean, it’s not so overwhelmingly heavy that it cannot be sorted through and digested, but i am not naive to the fact that there are some big pills to swallow.

but before i take this thing off on a different tangent entirely (if i haven’t done so already), i’ll do my best to bring it back around.

the reason i mention my [really stylish] baggage is this. only when you have established the level of comfort that the aforementioned article echoes within the confines of a relationship, are you able to unpack with greater security. with greater confidence that your ugly parts aren’t going to send him running for the hills. sure there’s apprehension, but isn’t there always when embracing true transparency? but when you are one half of a bond where the parameters include 100% complete authenticity and your partner affirms you in taking you just as you are -baggage and all -it makes unpacking that back seat a less daunting a task.

so yeah, maybe there is something pretty awesome about being comfortable in your relationship. arriving at a place where you experience the unprecedented freedom of being accepted just as you are-the good, the bad, the ugly, and awkward. because i think that’s where the magic comes. if you’re willing to engage in a boring kind of love, then my golly, can you imagine how wonderful the exciting love is going to be? 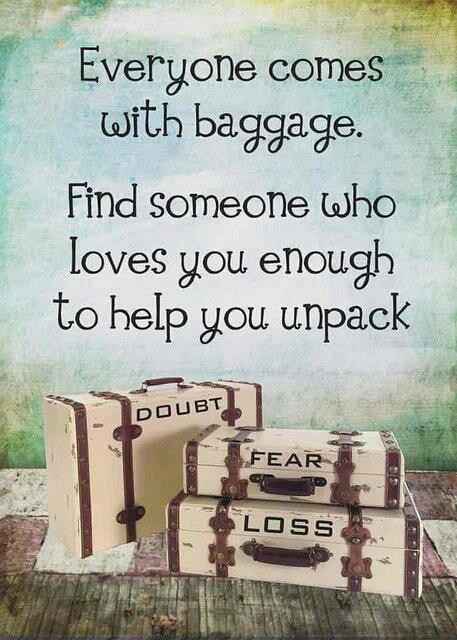