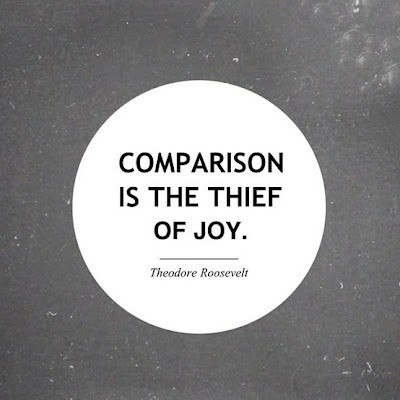 if you’re on pinterest, or savvy to the blog world in general, chances are you’ve probably come across this print (and maybe even “liked” it on facebook). so forgive me if this feels a bit broken record-y, but today, i feel as though i’m in need of a reminder.

now, i’m no stranger to the perils of falling victim to the comparison monster. i’m pretty sure a good portion of the late 90’s and even some of the 2000’s was spent wallowing away in a state of “if only’s.” heck, let’s be honest, it’s not as if at 27, i’ve suddenly outgrown its effects, either. perhaps the thievery has become a bit more arduous task to achieve, for i know my joy comes from a source of unshakeable foundation, but i’m still human, and a female (it ups the ante, it just does), so you know, i would be lying if i claimed i was immune to such theft.

and lately it does feel a little as if i’ve been robbed. maybe i’ve let the comparison monster back out of its dark space beneath my bed (is that not where you keep your comparison monster?). maybe lately, i’ve decided to focus on what i don’t have in place of what i do. maybe instead of being grateful for the advancements i’ve made in my own life, i’ve chosen to incriminate myself for the ones i have still yet to achieve. maybe, in my attempts at coming to decisions through the negative (i oftentimes can’t tell you what i DO want, but i can tell you what i DON’T), i’ve just flat out chosen to be negative.

but before i become an eeyore and have to start carrying an umbrella to stay dry beneath my personal raincloud, i channeled my inner coach taylor last night and gave myself the best motivational locker room talk i could come up with. except without the actual locker room, smelly football uniforms, and cute boys (bummer about that last part). and it sounded a little like this (and by sounded i mean, i didn’t actually say it out loud but rather wrote it down in my notebook. but i wrote it really aggressively and with tons of gumption so it’s basically the same thing, right?).

for as small as the world is, it is also quite vast. i know, that’s deep. but really, blessings aren’t like bacon, there will never suddenly become a shortage of them (yes you just used a bacon metaphor, but it was actually quite clever, so well played). in other words, there are more than enough of them to go around. and yes, that’s EVEN in a world of seven billion people. so just because so and so had her book published and what’s his name finally got his dream job, it by NO MEANS lessens the pool for you.

and yet, all too often you allow the rapidity of others’ achievements deflate the aspirations of your own. as if it’s somehow a race and whoever reaches their dreams first wins.

but life isn’t a race. at least not collectively. we’re all running individual marathons, on a course uniquely our own. so comparing your place along the journey to that of your best friend, co-worker, or even the stranger whose blog you tune into every day is a fruitless endeavor. speaking of fruit, it really is like comparing apples and oranges. actually more like apples and potato chips. because they aren’t even in the same aisle at the grocery store. they’re THAT different. you really love metaphors, don’t you?

and also, remember that you’re only seeing the final moment of triumph; the “yes!” after perhaps a multitude of “no’s.” the final window of opportunity after a few slammed doors.chances are the person whose life you’re envying or accomplishment you’re wishing was your own came with weeks, months, years of hard work, dedication, and resolve. it only appears as it it was handed on a silver platter. and so what if it was? again, i remind you, there isn’t a finite number of blessings in the world. just because someone else has received a deluge of them lately doesn’t mean that your shower isn’t on the horizon.

so cheer up, buttercup. focus on the life before you. the race you’re running on your own personal track. stop comparing the timeline of your life’s accomplishments and milestones to those of others. remember they’re apples and potato chips. one isn’t better than the other (though that may be arguable depending on who you ask), they’re each great in their own right.

celebrate in the big W’s in the lives of your friends and family. yes, especially the ones of those who share similar goals as you. use their accomplishments as motivation. heck, use them as inspiration. if they’re achieving the dream, that means it is actually within reach. maybe your arms just need to be stretched a bit further in order to grab it (go go gadget arms!).

and instead of focusing on what you’re not, and what you don’t have, be thankful for the place you are right here in this exact moment. because chances are the person you are and the place you stand are exactly who and where you need to be in order to take the next steps toward achieving those pending goals.

so tell that comparison monster making off with your joy to find a new life to loot. tell him that you hope it’s comfy down under the bed, because looks like he’ll be staying there a while.

clear eyes, full hearts, can’t lose (okay so this wasn’t in my speech, but it just seemed appropriate with the whole channeling coach taylor thing).

i know this won’t be the last time i have to give myself this pep talk (old habits die hard), but i will vow to be a bit more protective of my joy from now on.