now is the part of the show when i get all pop-culture referencey on you, so bear with me.

there used to be a segment on the soup where joel [mchale, as if he needs an introduction] would show a clip from the hills. said clip more often than not, featured the one and only stephanie pratt. 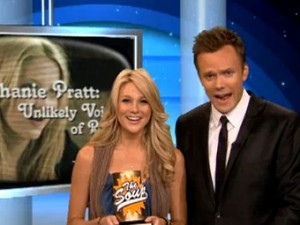 now if you know anything about stephanie pratt (i’m going to venture and guess that a good portion of you don’t, because you are normal and don’t watch shows like the hills, no offense to those of you who do watch the hills, because, hi, i am amongst you viewers), you know that she is, maybe NOT the person you’d go to for sage advice. but there were occasions throughout the season where she’d deliver a little gem, and well, joel was sure to highlight said moment in a little segment he liked to call, “stephanie pratt, unlikely voice of reason.” because, reason is reason, no matter how unlikely the source.

at least that was the case a few months back when one of my dearest friends (who by no means is a stephanie pratt per se, more so, just someone who is pretty stingy with doling out the pearls of wisdom, at least to yours truly. and yes, he would admit this, too) hit me with a truth bomb so right on, i had to take heed, regardless of its uncharacteristic origin.

but now that i stop and think about it, he’s known me for i don’t know, twelve years, so maybe there’s something to be said about his ability to sporadically knock me to my senses every now and then.

stop trying so hard. relax. go with it. do less.

i mean keep doing what you’re doing, just less of it. take “shawna” down a notch.

“you’re going to make yourself crazy,” he said. agonizing over every little thing. just do less, and let things happen.

and while the reason for said counsel was within the confines of the issue of relationships, i can’t help but think this simple sentence is applicable to all realms of my life.

i mean, two little words were essentially all it took from him to make me realize how much i’ve started to tighten the vice grip on my life again. in a season when God has far from neglected me (quite the opposite, in fact), i can’t help but think i’ve tried to snatch the wheel from him again. which seems, counter intuitive, doesn’t it?

if relinquishing control has only warranted amazing things, why on earth would i try to seize power at a time like this?

regardless, i’ve made the conscious decision to try out his whole “doing less” thing.

because “doing more” (so MANY air quotes!) has caused me a few too many anxiety-filled days and upset stomachs and an overall eeyore sentiment, which is like, SUPER fun to be around, i’m sure.

so thank you to my own stephanie pratt (should he be stephen instead?) and his ability to set me straight. because if these past months are any indication, the more God is allowed to do more and the more i am content with doing less, the better life just seems to be.

so perhaps his source of reason isn’t so unlikely at all.