if this year’s travels are any indication, i’m a big fan of visiting (aka inviting myself to visit-slash-crashing at) the abodes of my nearest and dearest throughout this fine country of ours. and while i’m always quite enthused to take on the role of tourist for a weekend or five (would it be possible to be a professional tourist?) on this past two-day work hiatus, i was fortunate enough to trade the tourist title for that of “tour guide” when my sweet A traded nor cal for so cal for a gal’s weekend with moi.

A’s flight came in just a hair before 10 a.m., giving me plenty of time to get in my saturday pure barre class before venturing down to charles lindbergh to retrieve her. it is important to pause here and personally thank anyone and everyone who has ever picked me up from the airport. i never realized how big of a deal it was to ask you of said favor. because if your experience of navigating through the terminal 2 arrivals wing was anything like mine, it involved not one, but two circles around the airport as well as an accidental entrance into a pay-by-the-hour parking lot where i had to not only take the ticket in order to gain access but also drive straight through to the pay gate where i had to plead with the nice elderly asian lady that i shouldn’t be charged for my stay seeing as i was exiting a mere 30 seconds after my arrival. oh you’ve never run into this issue? yeah, me either.

anyway, after i finally found my temporary house guest standing in front of the baggage claim 6,7 & 8 sign in all of her purpley shirt glory, i scooped her up, gave her a quick awkward sitting in a car side hug and we were on our way back up the coast for a morning of food, fun, and summer-like weather. first stop? pannikin to give B (who was ALSO visiting this weekend, i mean, TWO besties in one weekend, how did a gal get so lucky?) a quick squeeze and say hi to the three other fabulous friendies she was caffeinating with, too. after a brief catch-up session, A and my rumbling tummies notified us that it was indeed time to make our way down to my home away from home. no not trader joe’s, my other home away from home, honey’s, duh. caesar welcomed us in and at past 11 a.m., we had no trouble finding a table on which to enjoy our scrumptious oatmeal and egg white scramble (you figure out which one was my order). so with our hunger pangs quelled, we headed back to my homestead for a suitcase drop-off and a costume change for me (my legs were begging for some exposure in the mid-80’s heat) before heading out to the forum for a little “we don’t really have a reason to other than the fact that there’s probably a sale at ann taylor loft” shopping.

turns out, there was a sale at ann taylor loft. so you know, with 40% off the entire store, we couldn’t not find a little gem to come home with us. but when visits to a few other stores (and a few other visits to said stores’ dressing rooms) turned up fruitless, we opted to take our shopped-out selves back to the coast for an afternoon starbuck’s run and a beach side stroll.

a very sweaty back (ew, right?) and a toe blister later (turns out sequined flats aren’t the best walking shoes), we ended our cardio sesh back at the shopping center of origin where we were lucky enough to have a second run-in with B and her boy. the best thing about saying goodbye to her that afternoon? the fact that i get to say hello to her again THIS FRIDAY. yep, going to nash in t-minus three days. life does not stink.

at nearly 5:30 p.m., A and i had just enough time to retreat back to my humble abode for, you guessed it! another outfit change for yours truly (what? you don’t change clothes three times in one day? i just really love doing laundry, obvi) and an overall freshening up for our big evening out. and by big evening i mean dinner at rimel’s rotisserie in del mar followed by the 8 p.m. showing of argo at the fancy pants theater.

i wrote about that experience here.

apparently movie anxiety works up quite an appetite because following the flick, A and i quickly concluded that a late night run to swirls frozen yogurt was in order. and if you’re wondering (because i’m sure you were), YES, red velvet, peanut butter cup, vanilla milkshake, pumpkin AND cookies ‘n cream do all pair well together. but for these old ladies (she would attest to that title, too), almost immediately after those last few slurps of melted fro yo were consumed, at nearly midnight, we counting sheep in dreamland.

sunday funday arrived and we were ready for it. A’s flight wasn’t until 8 p.m. so we had the entire day at our disposal. we chose to fill it with a morning church service at north coast calvary with B (a different but just as fabulous B) followed by a delicious brunch date at naked cafe, and a field trip to la jolla. once in the confines of 92037, A and I took a tour of the club, i introduced her to colleagues and members alike, and we finished off our time in “the jewel” with a nice little stroll along the pathway from the cove to the children’s pool. our view was the opposite of hideous. 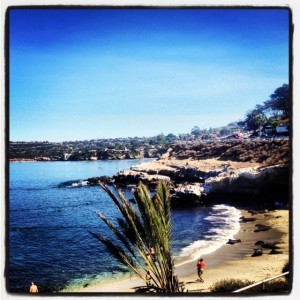 when we needed a break from all of the beauty (and yes, i’m talking about the residents of la jolla themselves), we moved our two-person party southward to fashion valley mall. because, how else were we going to combine the elements of enjoying the unseasonably warm weather al fresco and exploring the mall’s new(ish) and ginormous forever 21 store? i know, i had no idea, either. turns out, even in a store of five gazillion pieces of apparel, you can avoid the impulse buy (i’d like to thank mad will power and the fact that i do NOT need to add another striped shirt to my wardrobe for making that possible). but before we could fall victim to the frivolous spending monster at another store, we were graced with the presence of R whose unplanned arrival was a pleasant surprise to our sunday afternoon. the three of us played dress up in banana republic (fyi, i look really good in this cape), explored the new microsoft store, and finally retired at a nearby center where both yogurtland and smash burger were consumed.

and while i oftentimes wish i could simply will time to stand still, turns out i still don’t have that superpower….yet, so with the hour of A’s departure flight inching closer, it was time to say our goodbyes and return her back to lindbergh for her journey back home.

and yes, i’m MUCH better at dropping off my travelers than picking them up. only ONE try to get her to her gate.

bittersweet was the moment i gave miss A a final hug before sending her on her way, but wonderful was the weekend spent with such a cherished friend as she. gosh, that’s poetic. but really, i couldn’t have asked for a better way to spend the last weekend in october than by playing tour guide to one of my college besties in america’s finest.

there are friendships that are tested by time, space, and oftentimes seemingly opposite schedules, but whose foundations are so firmly planted that despite the aforementioned items, when the parties are united once more it’s as if not a single second has transpired in the interim.

A is one half of this type of bond. she’s one of the good ones, those humans that you wish you could clone and sprinkle about all aspects of your life. so on weekends like this past one, when i’m lucky enough to be in her presence for even just 36-hour’s time, i’m reminded just why i’m so blessed to have her in mine.

i heart you, A! thank you so much again for making the trip!