spend a few mintues with me (or more, i’m wonderful company -and very humble, too) and you’re bound to hear a friends reference or twelve. because, duh, it’s the best show of all time (that’s right, come at me, seinfeld fans) and deserves to be quoted at any and all opportune moments (and even at the inopportune times, too). but besides its relevance to my everyday life, perhaps what i looked forward to most of all in each of its respective ten seasons was its annual tribute to thanksgiving.

so in honor of the fact that the highly anticipated holiday that centers around the best three “f’s” there are in the english language -FOOD, FAMILY, and FOOTBALL, naturally, is a mere seven days away (hallelujah, cue angels singing), i’ve compiled my five favorite friends thanksgiving episodes (in order of importance/admiration):

number five. the one with the football (season three | episode nine). rachel, monica, and chandler go up against joey, ross, and phoebe to compete for the coveted gellar cup (is anyone else seeing a troll doll nailed to a two by four?) rachel goes really long. joey doesn’t know where dutch people come from. and holland loves chandler.

number four. the one with chandler in a box. (season four | episode eight). joey loves kathy. chandler loves kathy. kathy loves chandler. chandler sleeps with kathy. joey finds out. joey hates chandler. so chandler lives in a box to make joey not hate him anymore. monica wears an eye patch and brings richard’s son to thanksgiving dinner. she also creates one of the best 25 second clips of the show’s history: “Married a lesbian, left a man at the alter, fell in love with a gay dancer, threw a woman’s leg into a fire, LIVES IN A BOX!”

number three. the one with all the thanksgivings. (season five | episode eight). i mean, it’s just like it sounds, the episode where they reflect on the ghosts (and hair styles) of thanksgivings past. sir limps-a-lot. righteous mac and cheese. flock of seagulls hair. fat monica. and monica dances with a turkey on her head.

number two. the one with the rumor. (season eight | episode nine). also known as the one where brad pitt guest stars (RIP branniston). brad stars as a former fat kid and president of the “i hate rachel green” club. phoebe tries to get him shirtless, and joey turns phoebe’s maternity pants into “thanksgiving pants.” i must say, the man is a genius. also, typical rachel green, queen rachel does whatever she wants in little old rachel land (hair flip) (4:37 mark).

number one. the one where ross got high. (season six | episode nine). rachel makes half an english trifle (flips recipe page) and half a shepherd’s pie. it tastes like feet. joey loves it (jam? good. custard? good. meat? gooooood). hurricane gloria didn’t break the porch swing, monica did. and finally, phoebe loves jacques cousteau. now that’s a lot of information to get in 30 seconds (also, never mind the portugese subtitles).

and no, you’re not supposed to put beef in a trifle. happy one week from thanksgiving, y’all! 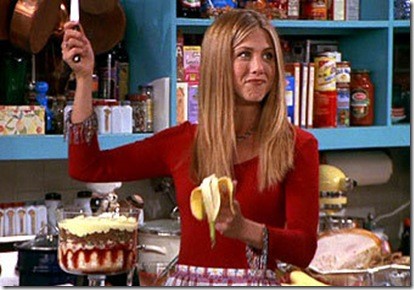