i have a big head.

some may say figuratively, but i’m here to tell you that while yes, that may be true (i know it get a little crazy with all of that horn-tooting, and i’m sorry), i mean it literally, too.

yesterday afternoon, on a whim (but really, it’s not a whim when you have an innate magnetic pull to said store) my gal K and i stopped by j.crew just to you know, peruse. having just been to the factory store in nash, i obviously wasn’t in search of anything specific, but again, when you were built with a j.crew chromosome, sometimes biology just takes over.

as was the case when upon entering, i was naturally drawn to the men’s section (don’t worry about it) and to the most perfect worn-in baseball cap in the most perfect shade of camel that i ever did see.

the fact that we were in the men’s section is actually important to this story, so forget about the part where i told you not to worry about it.

and on that note, i should probably confess (if i haven’t done so already in person) that i am kind of obsessed with men’s clothing. like a healthy obsession, as in, “hey men, ask me to dress you, i’m really good at it,” not like, “oh hey, i like to cross-dress.” not that i’m not above stealing my guy’s flannel, over-sized sweatpants, or jacket and wearing it as my own (because what else are boyfriends good for? i KID, i kid). but i digress… and nowhere does my affinity for male apparel blossom more than within the confines of my beloved preppy retail chain.

anyway, i made a beeline toward the camel-colored chapeau and slipped it atop my wavy red locks quicker than you can say, “hey wait, girl, you know that’s a men’s hat, right?”

and IT FIT, y’all. perfectly in fact.

i mean, all i’ve ever learned about the human head is that it weighs eight pounds. last time i checked, there was nothing in jerry mcguire detailing the average circumference of a human noggin; let alone the differentiation between the two genders, so you know, i’m not well versed in how big exactly a female head is supposed to be. but based on the fact that my head fit comfortably under a “one size fits all” cap in the men’s section at j.crew, i’m going to stand by my original statement.

i have a huge cabeza, y’all.

i’ve made my peace with it. i mean, i have to believe the size of my head is a direct reflection of the amount of brains residing beneath it. and if not brains, then at least, it’s due to the absurd amount of ‘n sync lyrics and celebrity relationship knowledge that’s stored up there.

or it’s the hair. i mean, i have enough for like three people, so you know, that probably factors into the whole hat-to-head ratio, too.

okay, so it’s probably a combination of both.

but regardless, the fact is that yesterday, i bought myself (at 30% off and with a gift card, thankyouverymuch) the most perfect camel-colored baseball cap from j.crew.

it just happened to be from the men’s department. 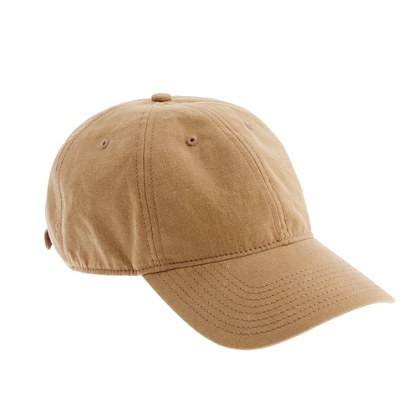