so despite the fact that i recently added a cape (it’s really a poncho but I prefer “cape”) to my wardrobe repertoire, turns out, i’m still not quite superwoman. 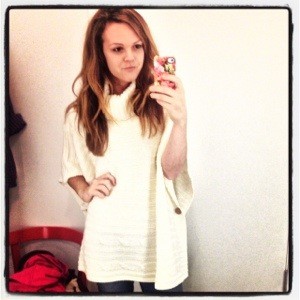 because for the past two days i’ve been sidelined with a terrible stomach virus that has all but made me wish that i’ve never eaten anything ever.

and sure, little aliens using my stomach as a trampoline aside, i haven’t hated being able to take a few dozen hours to foster a daily routine of napping, diet 7-up drinking, and real housewives marathon watching on bravo, but even with the opportunity to stay in my pj’s all day and turn my couch into a makeshift bed, i’ve pretty much decided that i absolutely abhor being sick.

right, because some people actually like it? obviously not. but i think i might dislike it more than the average bear. mostly for the fact that suddenly despite your best efforts, you become your body’s little hostage.

and in that moment, you realize…turns out i’m not invincible; no i’m very much human, actually.

and maybe despite the fact that i appear 17 to the naked eye, i’m reluctantly 10 years her senior. so nights of inadequately logged hours of sleep and much too many cups of caffeine to compensate aren’t recovered from as quickly as they once were. so perhaps this spontaneous corporal rebellion was simply my body’s way of telling me to do a little less of what i’m doing now. to respect my limits, rather than test them. to realize that this time of year especially requires a bit more discernment with regards to my extracurricular activities.

so I hear you, body. though i’ve adorned you with a cape recently, you’re still very much not superheroic. and if your behavior these past 48 hours is any indication of how you’ll respond if i don’t heed to your warnings to take a bit more time to care for you this season, then don’t you worry, your message has been heard loud and clear and consider you now a high priority on my to-do list.

p.s. thank the Lord for whoever created gluten-free pretzels.