for those seven of us who still watch the weekly musings of the upper east-side’s well-dressed finest, tonight marks the closing of a chapter. the final episode of gossip girl.

i remember when GG (as i lovingly refer to it) premiered some five years ago. far more racy than the cw (then, the wb) series to come before it, it centered around the adventures of a grouping of really really ridiculously good-looking teenagers as they navigated prep-school (and later the “real world”) in upper east side manhattan. aside from the really really ridiculously good-looking part (we could hold our own, but were by no means a bevy of serenas and nates) and the fact that it was set in upper east side manhattan, and most definitely the “racy” part, too, it sounded as though it could have been loosely based on my own high school experience.

but despite the fact that everyone and their mother was singing its praises, i thanksbutnothanksed it that first season.

truth be told, i had a strange reasoning as to why i didn’t tune in to GG for her inaugural entrance into boob tube-land. you see, i went to college with nate archibald. well, not actually nate archibald, rather, the dude who has brought nate to life for the past six seasons, mister yes he’s just as good-looking in person as he appears to be on tv himself, chace crawford. again, to clarify, he is just as good-looking in person and you know what else? he’s like really really nice, too. we weren’t like super close, but close enough to warrant many a weekend beach adventure and trip to the caf (with a big group of people, of course, he prefered brunettes anyway) our freshman year. but by fall semester of our sophomore year, he put his life as a pepperdine wave temporarily on hold for a chance at his 15 minutes. turns out, he got it, and about 139523752390423 minutes more. and i guess the thought of watching someone i had actually hung out with and maybe crushed on a little bit (i mean, look at him), in a real live television role on a real live television show was just WEIRD.

but after GG’s first season came and went and buzz about its salacious storylines and amazing fashion won over the affections of many a twentysomething and younger than twentysomething, too, i got over that whole feeling weird about it thing and joined in at season two soon thereafter. and then i immediately regretted every single thing in my wardrobe.

and since succumbing to the powers that are serena, blair, chuck, dan, and nate (and the umpteen characters that have staked their claim along the way), i have maintained a pretty strong loyalty ever since. yes, even up until this season, its final one, where i swear i might be one of a handful of viewers who still tune every monday at 9 p.m.

but gosh help me if i don’t want to see if blair and chuck FINALLY get together and STAY together! they are like the rachel and ross of our time. except without the whole having a baby thing in between.

and also, remember the fashion? kind of like the fashions worn in sex and the city, the garb donned on the upper east side makes my wardrobe look like the clearance rack at charlotte russe (no offense). so while the plotlines got a little far-fetched for my taste in season four and five, i still always had the drool-worthy designs to look forward to.

anyway, tonight is the final episode. according to my “info” button on my dvr box, in addition to hearing thoughts from the producers and cast, we’ll also finally learn gossip girl’s true identity.

and while i’m not NEARLY as emotional as i was when i had to say goodbye to the regulars of central perk, or the residents of dillon, texas, i am a bit torn over the fact that i will no longer see what harebrained schemes miss regina sparks has drawn-up or how awkwardly fro-ey dan humphrey’s hair has gotten since his last haircut. i’ll miss S & B (mostly because it just reminds me of the fact that this S is always missing her B), and of course, chuck bass and all of his debonaire and gap-toothiness. i’ll miss them all. 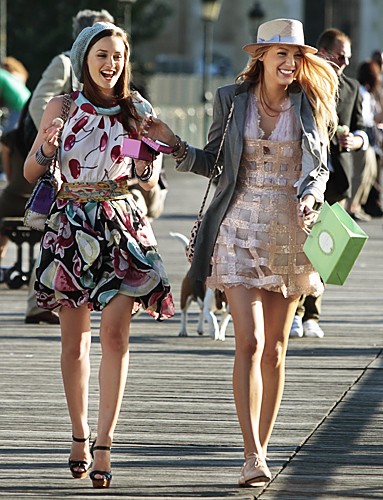 so here’s to one final “you know you love me” and one final ex-oh-ex-oh, too.

and to always claiming that i went to college with nate archibald. because in addition to enjoying questionable television shows, i am also shameless. 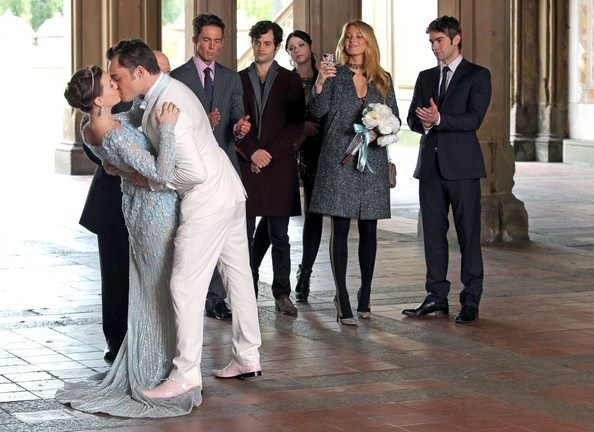 please let this be true and not just a photo-op to throw us off from the real storyline in tonight’s finale.