seeing as we’re down to single digits on the christmas countdown, i figured now was a good of time as any to discuss the art of gift-giving.

no, i’m not going to give you a “trader joes, nike tempos, and reality shows” 2012 gift guide to the [insert man, woman, child, family member twice removed, colleague you secretly have a crush on, etc here] in your life. so many other ladies have done that already and well, they did it WAY better than anything i could have come up with. plus theirs have really neat graphics and text on top of photos and captions and stuff. and i JUST learned how to put text on my photos like two months ago, so again, i say, they are just better resources overall.

what i want to discuss is how good it feels to receive a gift that was purchased with exactly you in mind. while i am a big fan of gift cards (hi, those starbucks drinks aren’t going to just purchase themselves -actually they will but only after i purchase 12 first), i also admire the gift-giver who manages to come across an item that (if it could) simply screams “shawna.” lucky for them, most items adorned in polka dots, sequins (or a combination of the two), over-sized flowers, and/or with a j.crew label are pretty good about yelling out my name, so you know, there’s a lot to choose from. but i won’t sit here and claim to be immune to the fickle fairy. she visits me quite often, in fact.

and maybe my appreciation for the creativity of my fellow gift-givers stems from my desire to always happen upon the “perfectly catered for you” gift for the present receivers in my own life. and while it’s not always feasible, given the availability of merchandise and time contraints this time of year, i do my best to give gifts whose recipient would be pretty pumped to receive.

sometimes i don’t get my mail. not like for an absurd length of time, moreso like a couple of days. most of the time it’s just ads and bills and those can wait a day or two. plus, sometimes it’s late and i’m cold and hungry and i don’t want to take the extra two point five seconds to idle my car and retrieve the contents of my designated mailbox. stop looking at me like that, have you ever seen me hangry? yeah, we’re probably no longer friends, are we?

ANYWHO, it had been a couple of days since i had cleaned out my little metal receptacle, so when i unlocked its tiny door on monday evening, it was quite full. except that this time of year, in addition to the copious amounts of junk mail and time warner cable bills (i only get one, i don’t know why i pluralized it), there is the possibility of christmas cards (well done, all of you, well done, indeed) and well, if i’m REALLY lucky, a brown paper package tied up with string. or a fed ex plastic bag, which is basically the same thing (just without the fancy song from sound of music).

well monday just happened to be one of those nights where i came across correspondence that wasn’t from my mortgage company or from the local dominos letting me know they are having a two for one deal on all medium pizzas (that’s just rude because i couldn’t eat them anyway). because nestled in that tin box was a bag from a company i didn’t quite recognize but was happy to hear from nonetheless. i mean, who doesn’t love a good unmarked package every now and then?

and once inside, warm, but not yet fed (don’t worry, i took care of that soon thereafter), i tore into that plastic bag like it was christmas day itself. and beneath the contents of those non-recyclable fibers was this: 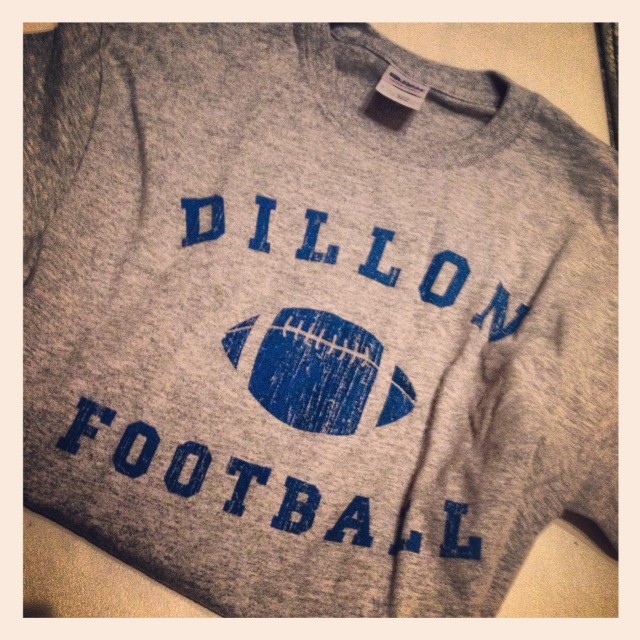 the most perfect gift i have ever received. one “perfectly catered to me” and one that most certainly screamed “shawna” upon getting settled on my fresh from pure barre body. and though there was a strip of paper notifying me, too, i knew immediately who the gift was from. B. my best. the gal who not only shares in my love for all things dillon, but who would go so far as to purchase me a little piece of it, too.

for those who don’t know who dillon is (it’s not a who, but a where, and also how are we friends?) or why i would be so excited about receiving a t-shirt that doesn’t displays a sequin, ruffle, or plaid pattern, let me explain.

dillon is in texas and the setting for the best television of all time. friday night lights. within its city limits are some of the most amazing (albethey fictional) characters to ever grace the earth (get over the loftiness of that statement and just go watch all five seasons on netflix, mmk?). though, as the t-shirt may have you believe, the show is primarily focused around the local high school football team, the show is so much more than that. and for that reason, and so many more (like how coach and tami taylor have the best marriage ever to be depicted on television or how tim riggins is the love of my life or even how i love it whenever someone thinks i resemble julie taylor) i am and forever will be obsessed with dropping “clear eyes, full hearts, can’t lose” into any and all conversations/situations.

but enough about that and back to the gift itself.

sure, it’s a t-shirt. one that i plan on pairing with my comfy abercrombie sweats and wearing immediately upon arriving home from a long day of work on most days that end in y. and while it may have been a simple endeavor to send to me, it’s the thought behind it that makes it so special.

my bestie knows me well. and it shows. she’s mastered the art of gift-giving and i’ve got some big shoes to fill as a result.

and because i can’t resist…clear eyes, full hearts, can’t lose.