i woke up new year’s day with a bee in my bonnet. which is terrifying considering the fact that i’m fairly certain i’m allergic (to bees, not bonnets). maybe it was the fact that it was officially the first day of a brand spanking new year, or the fact that i had been spending way too much time on pinterest, or even still, the fact that i had been assisting in the redecoration of a few of my favorites’ humble abodes, but for whatever reason i was heck-bent on kick-starting 2013 with a little home makeover.

i’ve lived in my condo for a little over five and a half years now. it has seen two roommates, a handful of house guests, a dinner party or two (no literally, i think i’ve only entertained twice. that needs to change, stat), and many, many batches of roasted vegetables. its beach-theme has kept my affinity for sand and salt water at bay (i may be able to see the ocean from a faint view from my kitchen window, but i’m still upwards of ten miles from the pacific) and my romance-meets-an-abundance-of-ruffles-and-dusty-rose bedroom decor has satisfied my longing to live inside of an anthropologie catalog for perpetuity.

but tastes change. and thank goodness they do because if that wasn’t the case, well, i mean, i’d probably still be living in a world sans sushi and clad in a pair of old navy overalls (shudder). and lately i’ve been craving a bit more refinement in terms of my abode’s adornment.

over the years, i’ve managed to collect a myriad of housewares -mismatched serving spoons, microwave-melted plates, gifted-from-an-old-roommate-and-gently-used silverware. similarly, in an attempt to fill my 1,100 square feet of empty space upon move in day, i also utilized decor for the sake of its utilization (see also: decided to display not one but TWO baskets filled with plastic fruit -lemons and apples if you really must know).

so with the vigor of a lady really over having funky flatware, i began to purge. i gathered items no longer needed, items whose presence in my room, kitchen, and bathroom had simply run its course. and i placed these items -this hodgepodge of old kitchen towels and tattered picture frames, of over-worn measuring cups and rogue stuffed animals, into three white trash bags for either immediate disposal or future donation.

and feeling like a whole new woman, i made a list. i began to pen tangible items -cups, silverware, miscellaneous cooking materials (most of which i had just trashed) as well as intangible ones, too -color palettes, concepts, dreamy creations i had seen on pinterest and in the storefronts of restoration hardware. and then, i set out to conquer every discount decoration store from encinitas to mission valley.

first stop walmart. yes, you (virtually) heard me correctly, i went to walmart (i love walmart, but don’t tell target). i bought a 48-piece flatware set for $9.97. do i need 48 pieces of silverware? probably not, but if i ever have the desire to throw a dinner party for 47 of my closest friends, i will now have plenty of forks, knives, and spoons for them to use.

following walmart, i popped into pier 1. their window display had me intrigued, as did their giant 50% off sign. turns out, the sale was associated with their now out-of-season christmas fare, but perusing the store certainly gave me ideas for future decorating. it also reminded me of how great of a store pier 1 really is. i also ran into an old high school friend. she is just as adorable as ever. since target is just a stone’s throw from pier 1, i took advantage of its proximity and took a gander inside. but really, if you know me, or are just human, you know i’ll never pass up an opportunity to peruse the bulls-eye. and peruse i did, up and down the aisles of everything from bathing suits (really? REALLY? you want this pasty goose-bumped bod to shimmy her way into a two-piece right now? i mean, let’s be real here) to turkey basters (okay, that’s a gross over-exaggeration. i have never had the need for a turkey baster and i don’t plan on having that need any time soon). but seriously, i scoured the store for home decor and unfortunately came up short. i know, not so much as a place mat or picture frame. rude.

so despondent but not completely dejected, i ventured down a few shopping centers to the mecca for discount housewares –home goods! and what j.crew factory is for my wardrobe, home goods is for me homedrobe. that’s not a word, but i really wanted something that sounded like wardrobe. anyway, i toured the aisles for upwards of 45 minutes -making sure to leave no porcelain angel statue unturned. if you know anything about discount stores such as this, you know that often times the gems are hiding beneath, beside, or behind the unwanted junk. and after sifting through a bevy of bath rugs and throw pillows i managed to leave the store with a small loot of dish towels and a distressed mirrored door. not bad, but dish towels and distressed mirrored door do not a home make.

a visit to home goods’ kid sister marshall’s warranted a really cute burlap bow adorned sea-foam green picture frame (y’all, it was such a great find!) and a subsequent trip to world market (a totally underrated housewares and other miscellaneous bits of awesomeness store) turned up two adorable sage and white hand towels.

i moved down the coast once more to another location of home goods. i know, that seems excessive, but if you are familiar with home goods, you know that alternative locations equate to alternative merchandise so i figured it didn’t hurt to see what point loma’s franchise had up its sleeves. or whatever the equivalent of sleeves are to an inanimate object. and well, what do you know? that same distressed mirrored door i had just purchased was available in the color i had originally desired -off white. i know, people talk about fate in terms of finding your soulmate, well, let me tell you, there is most certainly kismet when it comes to happening upon your ideal housewares, too. and i experienced it right there in the middle of the point loma home goods. so i hauled the grayish one from my car back into the store, returned it, and then proceeded to purchase the off-white one. it sounds like a bigger production than it actually was. in all honesty, the whole task took about ten minutes.

and just like that i had the focal point for my new bedroom.

now for those frames. for those, i turned to the swedes. yes, those meatball-making, lego-producing, blue-eyed, blonde-haired swedes. the ones responsible for the costco of home decor and some of the most confusing printed directions around-ikea. truth be told, i’m a big fan of ikea. mostly for the fact that i can get my cardio in for the day with just one trip (the store is ginormous). no but seriously, it’s pretty great for inexpensive home decor, especially if you’re looking to buy in bulk (hence the costco reference). which was what i was doing, so hey! anyway, i managed to score about a half-dozen frames in a few different sizes in both cream and dark wood. while i can’t quite be certain as to what i will fill them with, i’m fairly confident there will be burlap and sepia tones involved. 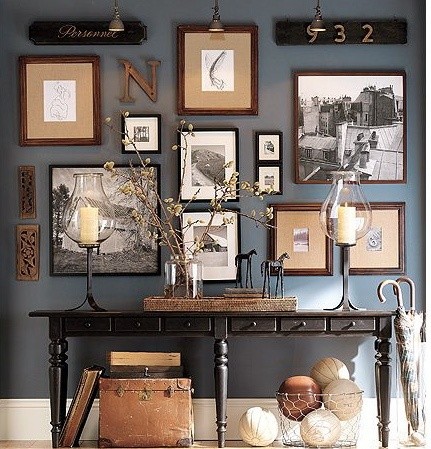 wall inspo for my bedroom.

i probably should have purchased a fork at ikea prior to leaving, because i could have stuck myself with it for as done as i was. hey-o. i could have also used it to eat everything in sight as the day-o-housewares-shopping had left me ravenous. (don’t worry, nothing that a little, okay a lot of sushi didn’t fix!).

but exhaustion aside, i was quite pleased by the progress i made in only a day’s time. i have a long way to go to make my house a home –one that i’m truly excited to return to each night -but like most good things, i know this project will take time. plus, slow and steady won the race, remember?

and let this be a promise to you: once everything is where i want it to be and the walls are re-painted, and there  is tile lining my bathroom floor, and my shoes are properly displayed in a shelved unit of some sort (instead of on the floor as they are now), and there are frames on the walls with photos that weren’t taken upwards of seven years ago, and i have more than just a yoga ball and a dust buster in my third bedroom, and the guest bath has towels that aren’t appropriated for beach days, and there is furniture on my patio that isn’t weathered wicker, and maybe even a bouquet of fresh flowers in a mason jar on my dining room table…

then i’ll invite y’all over for a dinner party. with brussels sprouts and everything.

but until that day, i’ve got some work to do. so here is a list of things i’m aiming at achieving/fulfilling/doing/making/buying/otherverbsthatendin”ing” this year (and beyond?):

i’m going to make my room a sanctuary.

i’m going to finally decorate my guest bathroom. this means not using beach towels as hand towels and actually hanging something festive on the wall(s).

i’m going to finally do all of those diy projects i’ve spent the last year+ pinning. starting with this: 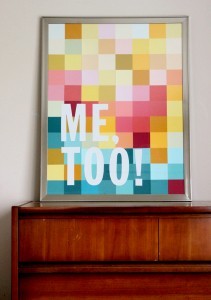 i’m going to find some kind of furniture piece to display/store my kicks. they’ve spent way too much time huddled up on the ground next to my bed.

i’m going to replace the over-worn carpet in my bathroom with some sort of tiled floor. i plan on continuing the new floor efforts into my bedroom and down (and up?) both staircases. carpet is overrated. besides, swiffer > vacuum. any dang day.

i want matching mugs. ones that go together and aren’t from that work convention from 2007.

i’m going to display my toiletries in a really pretty way. i bought canisters to hold my q-tips and cotton balls and i plan on replacing my toothbrush holder, too.

i want to furnish my dance party room and guest bedroom with more than a yoga ball and the modem for my high-speed internet.

if nothing else, i want to create a living space in which i finally feel as though my roots have been planted. living in transition has only made my feel as though i myself am transitory. and while my wanderlust and weekend getaways certainly lend themselves to the occasional directional migration, i’m kind of ready to sit back and stay awhile (as long as you bring me a cocktail).