okay, not literally, guys. please notice the small period separating the m and e -indicating that the “me” part is, in fact, an abbreviation for something. in this case, mediterranean eatery. therefore, put everything together and you have “bite mediterranean eatery [and kabobery].” furthermore, you also have a really delicious restaurant located on f street in the heart of the gaslamp quarter downtown -one of which i visited on saturday evening and featured in a subsequent article which is currently posted on AskMissA.com.

armed with a hearty appetite, and a willing (okay, and awesome) dinner accompaniment, i donned my unofficial restaurant reviewer cap for a night out on the town -the town being downtown san diego and the night out being an hour-long comped dinner at bite m.e. i know, we like to get crazy on our saturday nights.

as you may have deduced from my lack of postings on this subject, it had been a while since we were treated to one said occasion. but much like riding a bike, once we were seated and immediately doted upon by the staff, we found our bearings very soon thereafter. oh yeah, so this is what it feels like to be treated like a celeb. turns out, even after all this time, it feels pretty darn awesome. and we had the mediterranean food-stuffed bellies to prove it. of course now, i’m kicking myself for not photographically documenting the meal, at least through shameless instagrams, but unfortunately i was too busy stuffing my face with hummus and falafel to be bothered with photography. so professional shots borrowed from the restaurant’s website will have to do for now.

anyway, though the eatery touts a more casual environment, i felt the need to get a little more gussied up than normal (maybe it was the fact that i had been in my pure barre uniform all day and had remained unshowered until about an hour prior to my house departure). so clad in my dark trouser jeans, leopard wedge heels, simple black button-down, and baublebar topaz chain necklace (again, my apologies for not documenting this, too, it was a really great hair evening as well), and my go-to banana republic outlet red coat thrown on top for warmth (and a necessary pop of color, this neutral palette was very un-shawna of me), i headed southward on a gloomy saturday afternoon to meet my dinner date.

downtown was bustling, as i’d imagine it usually is on a saturday evening. and as we made our way north on f street, i was careful to take in the sights around me -mostly for reference points so we could make it back to the car after dinner. after a short jaunt, we arrived at the eatery. 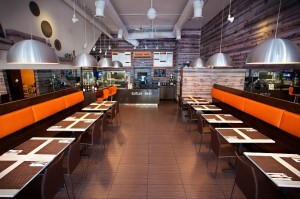 in a not-so-subtle way, i tried to inform the hostess who i was (i mean, that sounds incredibly pretentious, doesn’t it?) and after a bit of tripping over my words, the general manager clarence (who was (and still is) a gem) finally came over to show us to our seats. in fact, he took care of us for the remainder of the evening. though he took our orders, he also treated us to many additional small plates so we were able to get a well-rounded sampling of bite m.e’s extensive menu. i mean, hi falafel, you had me at hello. 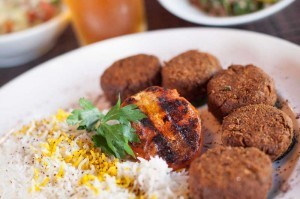 we started with the falafel plate, which, i mean, was the best dang falafel i’ve ever tasted. and that’s saying a lot because i’ve eaten a lot of falafel (but really, who hasn’t?). it was melt-in-your-mouth scrumptious and even better when dipped in the accompanying made-from-scratch tahini sauce. from there we ventured into dip-a-palooza -hummus, fiery feta, and a roasted eggplant/caramelized onion mixture that made a temporary eggplant-lover out of me. holy guacamole was it good. and while the pita bread was quite tempting, i managed to remain gluten-free for the evening. besides, why bother with bread when you can just eat hummus straight from the plate with your fork? precisely. 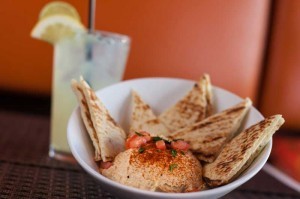 after i had consumed enough hummus to outfit the entire greek population, we moved onto the salad course. i mean, i love salad. i could probably eat at souplantation every day of my life and never grow tired. i realize, however, that i’m at times alone in this love for all things romaine. but when i saw a listing for the mediterranean salad -a mixture of greens, artichoke hearts, hearts of palm, kalamata olives, onions, all drizzled with a homemade basil vinaigrette on the menu, i took a gamble that this salad might please more than just my palette. turns out, i made a good wager. he loved it, he loved it! and how could he not? i wanted to drink the dressing by itself.

following the rabbit food, we were ready for our entrees. i elected a salmon kabob with basmati rice and shirazi salad, he, the sultani -a combo of filet mignon and ground sirloin, which came alongside a generous helping of sweet potato fries (oh yeah, i snuck some of those) and tabouleh salad. in a rare fete, we managed to not finish our meals, which left me with room in the waistline of my pants, and him, with a doggie bag. but though we had a fleeting moment of self-control in terms of our food consumption, the lack of making happy plates was by no means an indication of how much we enjoyed our food. everything was duh-lish-us.

and aside from a flying feta incident that occurred when our salad was brought to the table, (poor clarence was mortified, but i assured him that it would by no means affect my review. plus i mean, how often do you get cheese thrown at you? especially when you’re lactose intolerant (oh the irony)? it was the most excitement i had seen in a while!) the evening was a pure pleasure, as evenings such as this tend to be. great atmosphere, perfect company, and delectable cuisine.

it’s funny (and awesome) to reflect on how often this scene was an habitual occurrence in the life of yours truly just a few months ago. in fact, most of 2012 was spent eating some of san diego’s most delicious fare for FREE. of all people to get this gig, you would think i would have been an unlikely choice because let’s be honest, most cuisine is lost on me. but that’s why i bring along a pretty adventurous eater to supplement what i don’t find palatable (it’s a pretty good system we’ve got worked out here). and just like that, everyone wins!

maybe it was the fact that we hadn’t dined in this capacity for upwards of five months, or we were just drunk on hummus, but i can’t help but feel as though there were a few more laughs and memorable moments shared during this particular meal than the many to come before it.

so here’s to getting back on the proverbial food-reviewing horse. with a handful of pending offers waiting in the wings, it looks like 2013 will be another delicious year.