so if you didn’t already know (actually it’s pretty safe to say that you actually might not know this), i grew up without an abundance of boyish things. aside from those blue duck-patterned linens that lined my crib in my first weeks of life (surprise! it’s a girl!) and that brief stint as a tomboy from about the middle of third to fourth grade (oh hey no fear wardrobe), i was -and still am -about as girlie girl as they come.

and not that video games are, say, only reserved for the male population, but let’s just say that i wasn’t trying to beat my top score at grand theft auto on a saturday afternoon. i mean, i dabbled with wii tennis senior year of high school (mostly for the fact that it gave me more time with my crush) and in college, well, i mean what boy in peppers c suite wasn’t playing something on x-box? so again, to log some quality time with the objects (yes, plural) of my affection, i sat through a game of halo or twelve.

but as far as my skills in the world of gaming go, well, they are pretty much non-existent. i will say that i got pretty good at sonic the hedgehog on sega back in elementary school and i had to have passed through at least five levels on my gameboy’s version of kerby. but a (wo)man does not rest on his(her) laurels alone. so, after some coaxing, i’ve picked up the controller once more.

first there was virtual archery, where i channeled my inner katniss and had target practice with every rogue watermelon, pumpkin, and floating money bag this side of the mississippi. turns out, i’m pretty good at pretending i’m fighting for my life in the hunger games. it also turns out that really aggressive virtual archery-ing does a number on your elbow joint. forget tennis elbow, i had controller elbow. does that mean i’m out of shape?

and then, this past weekend i decided to jump like eight levels and bypass anything remotely intermediary between a playful game of watermelon piercing and a serious session of world of warcraft.

and unlike the title of this particular rambling, i am well aware of the fact that john madden and steve madden are not related (i googled it to make sure because knowing my luck, they are probably distant cousins, twice removed). but let’s just say i am way more versed in steve than i am john. and one further, i am certainly more versed in steve’s handiwork over john’s contributions to both the football and video gaming worlds (i DO know he gives a mean coach taylor pep talk, though).

i’d like to think i’m pretty educated in the game of football. i know aaron rodgers is dreamy and alex smith, too.

okay, in all seriousness, i know what i’d like to believe is a great deal about the game of football. for instance, i know that games are divided into 15-minute quarters, that a touchdown is worth six points, and that beyonce is performing at this year’s super bowl -wait, how did that get in there?

but i quickly found out that there’s a huge disconnect between knowing the rules and nuances of the game and actually executing the plays onscreen. not only do i not know the difference between a flying V (wait, that’s hockey, isn’t it?) and a charger cross (i found that term on a website discussing madden, not sure how accurate or relevant it is, but i’m trying to prove a point here and needed a specific example), but i’m still getting used to the controller buttons (and their subsequent functions). triangle, square, circle, left arrow, right arrow, R3, R2, R1. i just want to pass the ball to the runner guy, how do i do that?

by the grace of God and probably by accident (just kidding, i actually got the hang of things by the 4th quarter, right in time for the two-minute warning), i scored a touchdown but blew the PAT with poor alignment. oh well, at least i finished the game with more than a goose-egg to my name! i had elected playing as the new orleans saints, so i was really just more concerned about letting down drew brees. he’s such a nice guy and i hate to see him sad. but though my performance was lackluster at best, i did manage to enjoy the realistic qualities of the video game itself -what up, who dat nation? 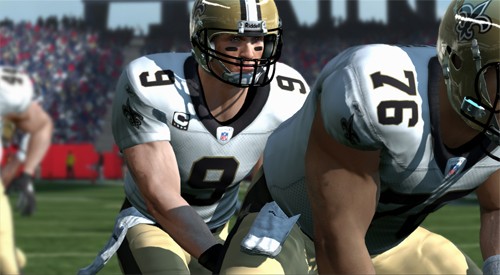 there i was in all of my drew brees glory.

overall, it was a humbling first introduction to the world i had always only heard about in eavesdropped conversations in the pepperdine cafeteria. playing only made me realize that not only am i extremely stubborn when it comes to employing skills that don’t come completely naturally to me, but also that i should probably pay a bit less attention to the players participating in the game and more to the actual game, itself. good thing for me, i have a date with a flat screen this saturday to see the cheese-heads take on san francisco’s finest. and while i can’t promise that i won’t steal the occasional longing glance at mr. rodgers over the course of those four quarters, i do, in fact, plan on taking inventory of his team’s plays, too.

i mean, if i spent half as much time and effort studying the stats and strategies of the players as i did on their dating lives (RIP the bush & the tush), i think i might have a shot at a rematch.

so bring it on, madden opponent (you know who you are), i’m coming for you.

p.s. i apologize in advance if any of the above information regarding football and/or the game of madden is in any way, shape, or form completely inaccurate. like i said, i like aaron for his face not for his throwing arm.