i stumbled upon a few tucked away photo albums last night. photos of a simpler time. photos of life before the “real world.” photos from college.

and my goodness, memory lane, was it ever so lovely to walk down you.

snapshots of a life lived in a zip code i’ll never be able to afford again, with friends whose proximity i’ll also never reclaim. still frames of a freckled-baby-faced (not much has changed has it?) teen turned twenty-something, no, not something, just turned twenty (i graduated two months prior to my 21st birthday) with blonde hair (i really loved that hair dye, didn’t i?) and a slight frame who managed to take life a little less seriously than she finds herself now seven years later. and the fashion choices, my goodness, the fashion choices. culots, hip-slung jeans, trucker hats, and crocs(!). a mere three of my 27 years on this planet, but three years so full, i find myself yearning for the opportunity to press reset and do it all over again.

sigma chi formal spring semester of my freshman year. my first time back in the city by the bay since my coastal tour of colleges spent with the rents over spring break of my junior year in high school. despite my better judgement, i skipped my history class that friday afternoon so that we could get on the road early -a mid-afternoon departure being our best defense against the inevitable grape vine traffic jam. we arrived in san francisco at sunset, and as we watched the colors of the sky turn from orange to purple from the windows of our hotel room, i told myself to savor every minute of that weekend away. and i did. we rode cable cars and ate out of bread bowls, broke it down on the dance floor and ran around the hotel lobby in our pajamas until the wee hours of the morning. i got to spend my very first out-of-town fraternity formal with my very best friend. and while our friendship may have faded with our college careers, the details behind this particular photograph are just as vivid as they were when it was snapped almost a decade ago.

also, turns out i missed a lot of information when i skipped out on that history class that day (as was evidenced by that blasted final exam) but memories weren’t made studying history, they were made making it instead. 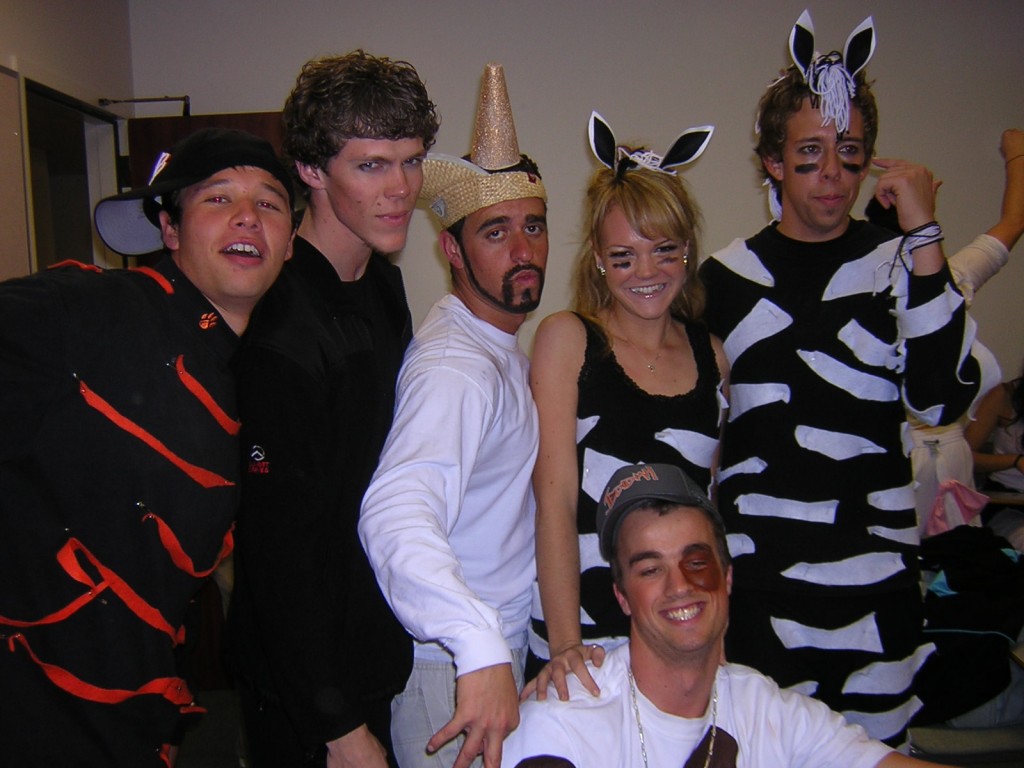 do not adjust your computer screens, i am in fact, dressed as a zebra. a zebra who is apparently getting ready to play football (not sure the reasoning behind the under-eye paint). every spring the greek groups (and friends) of pepperdine pair off in a singing/dancing competition lovingly known as songfest. for two weeks, teams of sorority and fraternity members log late night hours perfecting their singing voices and choreography until opening night where they must perform their 12-minute shows for an audience of fellow students, parents, and of course, sublebrity judges. while we did not claim the prize this particular year, my participation in our garden of eden-themed event, clad in a make-shift zebra costume, executing dance moves as if i was britney spears herself, was by far the most memorable of the three song and dance numbers i participated in during my days as a wave. even almost eight years later i can’t listen to freddy mercury belt the lyrics to “somebody to love” without picturing a menagerie of farm animals doing kick-ball-changes with jazz hands.

i may have gotten about 8 hours collectively over those two weeks of rehearsal prior to the main event. but i’d gladly trade ten thousand moments in slumberland for a solitary moment of reliving the coordinating dance number to “all i have to give” by our very own (and might i say more handsome) backstreet boys (who i’m posing with above). 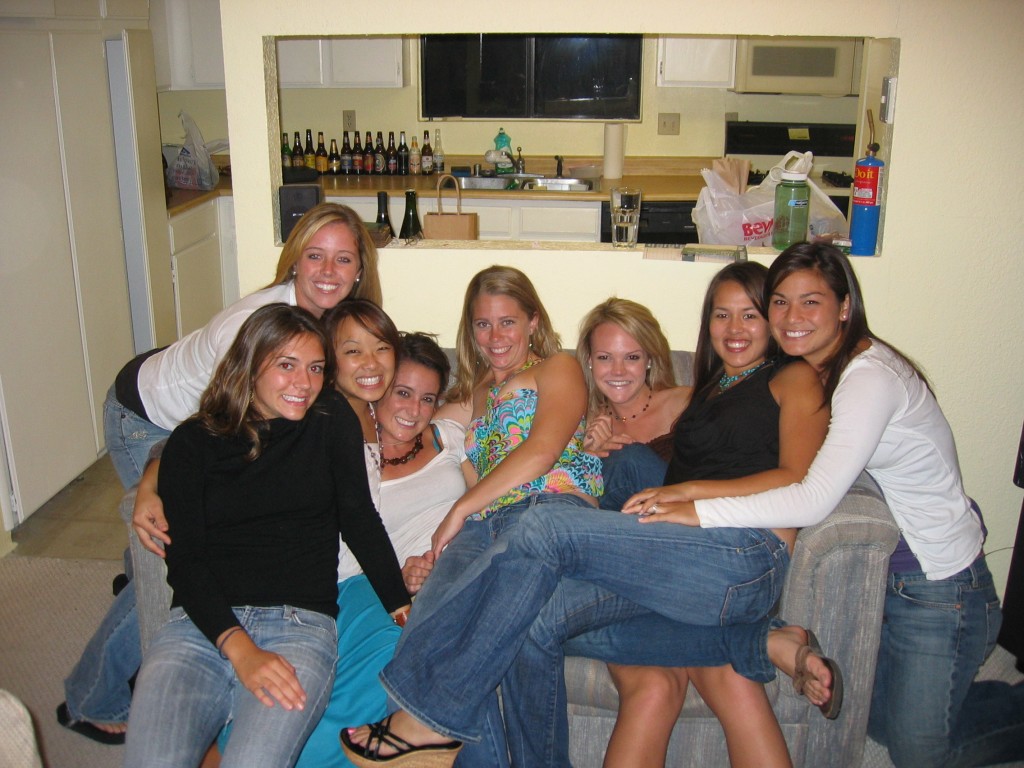 it must have been their 21st birthday and for as many friends as they had(have) combined, we all but took up the entire top level of bj’s pizzeria that night. i had a veggie-stuffed baked potato and we all retired to the birthday boys’ house through the canyon to continue the festivities following a grammy award-winning rendition of happy birthday. a dance party ensued. and i remember feeling so very “college.” that kitchen behind us never stayed clean for long and there was never enough toilet paper in the guest bath, but regardless, this home was an integral place of congregation throughout my final year at pepperdine. and this photograph reminds me of the wonderful times (and episodes of laguna beach) that transpired there. 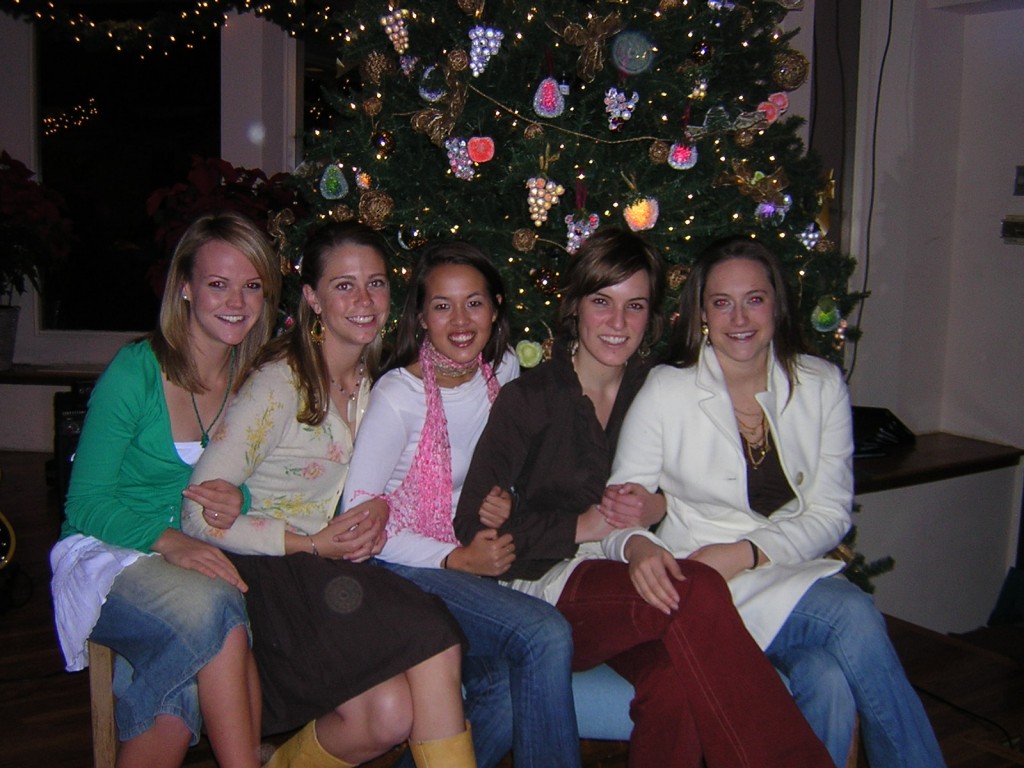 bella mar apt. 206. my final address as a malibu resident. a home shared with four of the most amazing women that have ever come into my life (as well as a half-dozen temporary residents that may or may not have had a monopoly on our washing and drying machines). it was exactly how you’d want to spend your last moments as a college co-ed -residing with your best friends in a three-bedroom condo just a stone’s throw from pacific coast highway. there were laughs (so many laughs) and yes, even tears, copious servings of roasted vegetables, and at least a dozen batches of chocolate chip cookies -the result of some serious therapy baking. there were evenings spent watching grey’s anatomy by candlelight and a few mean games of battle of the sexes pictionary, too. there were late night cramming for psychology exams, and spanish literature essays finished just in the nick of time. early morning call times for student-teaching gigs and what seemed at times to be one big communal closet (looking at you, L). an academic year spent cultivating the bond that a shared roof already provided -we were more than roommates, more than friends, we were a family. and accordingly, on this particular evening at our weekly university ministries gathering, we snapped a photo for our first and only official christmas card from the gals in apartment 206. seven years later, this little family almost all has families of their own -one engaged, two married, and one now a mother of three. and while life stages may separate us now (and physical miles, too), there was once a time when our stages converged. and we have the christmas card to prove it. 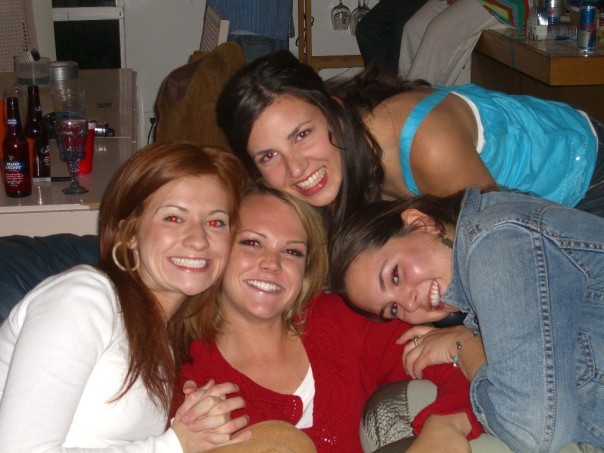 i’m the girl that left the party early, graduated college in three years, instead of four. but something about getting started on life in the “real world” just sounded so appealing. looking back on it now, i may have chosen to do things differently. but living with regrets will only keep you focused on the past and there’s too much future ahead of me to be found. this night was bittersweet. bitter for the fact that it was the closing of one chapter, but sweet for the promise that lay with penning the next one. there were celebratory cigars and a red solo cup or (twenty) two. a dance party atop a mahogany coffee table and photos like the one above, piled in each others’ arms, simultaneously sporting goofy grins while all the while wiping tears of sadness from our eyes.

i’d place good money on the fact that my college experience looked vastly different than yours (except for all of my fellow waves, and for that i say, we had it made, didn’t we?) but i wouldn’t have traded those years filled with friendlationships and trips to malibu yo for all the football players in the world (in case you weren’t aware, pepperdine’s football team went undefeated in 1942 and then just went un-existent (i know it’s non-existent, just trying to be clever her) thereafter). while i’m perfectly happy with having a mortgage and a 401K plan and maintaining a preventative skin care routine, when i stumble upon photo albums time stamped with the years 2003 through 2006, i can’t help but yearn for the days spent at 24255 pacific coast highway, malibu, 90263.