Anonymous asked: Do you have any suggestions for someone wanting to get back into writing and, hopefully, turning it into a career? I let my parent’s nagging get the better of me in college and I reluctantly switched from an English major to something more “secure.” A degree and 3 years of mind-numbing office work later, I desperately want to get back to what makes me happy, but I feel so out of the game that I don’t know where to begin.

Create a portfolio of your published work. (Here’s mine as an example.) Don’t have any? Start contributing. Start a blog. Keep the focus tight, the writing clear and clean, and don’t fill it with your personal drama. Enter writing contests. Send samples everywhere. Contact an editor at your local newspaper. Write for blogs. Write for free. Start a novel. Wake up an hour earlier each morning than you usually do and don’t even rub the sleep out of your eyes first; just fire up your computer and write. Write after you’ve come home from a night out, and you’re still a little loaded. Write in the shower. (I turn the recorder on my phone, perch it on the windowsill, and then dictate.) Write at work (stealthily). Just write. Write. Write. And perhaps most importantly, call yourself a writer. When people ask what you do, say, “I’m a writer.” Sure, you have a day job, but that’s not your vocation. As long as you write, call yourself a writer (via, emphasis my own)

i’ll admit it, though i’ve had articles published online (and one in print) for upwards of a year now, and yes, even despite contributing daily to my blog (which by the way, just celebrated its third birthday, woo hoo), the “w” word still doesn’t quite flow off the tongue when speaking to others about what it is i do. or at least how i view myself in terms of vocation. but even if a singer never gets a record deal, or a chef never opens his/her own restaurant, that doesn’t lessen their talents. in the same way, even if my book is never published, or my name never flashes across the new york times best seller list, or even still, if i never get paid a dime for my words (that’s about to change, i hope), it would never lessen the skill i truly believe in my bones i was destined to cultivate.

so in the same way, i shouldn’t demean it by leaving it absent from conversation, neglecting to highlight its presence in my life, or by somehow discounting it for merely the fact that its fruits aren’t used to pay the bills.

i am a writer. a writer, i say. i’ll shout it from the rooftops and tell the middle-aged woman behind me at starbucks as she waits for her venti ice latte and a blueberry muffin. if anyone else is ever going to take me seriously as a writer, i better start taking myself seriously first. 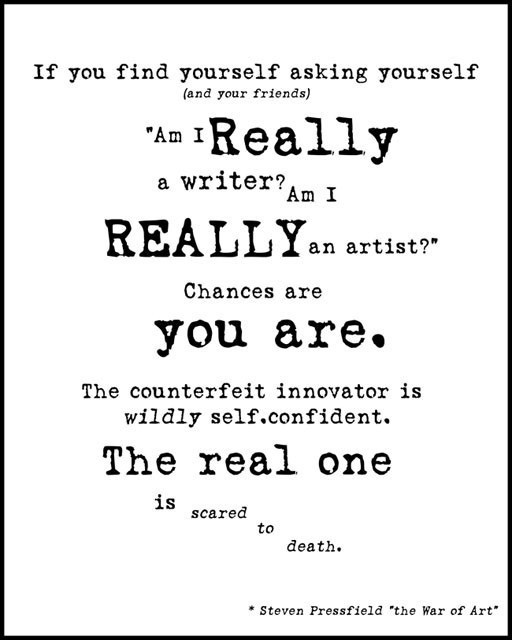