i’ve never done the whole wait in line on black friday thing and i skipped out on the missoni madness last time target launched a line that held with it such anticipation. but after weeks of floral-adorned images had danced around my head like sugarplums, i decided to throw caution to the consumerism wind and try my hand at scoring a few pieces from prabal gurung for target -the bulls eye’s latest featured designer collection. turns out, i wasn’t the only one with the same idea.

i set my alarm for a time that many would deem simply unlawful for a sunday, but i knew that if i waited until after my usual 8:45 a.m. church service, i could kiss my white floral dress dreams goodbye. so i figured if target opened its double doors at 8 a.m., well doggonit, i would be there with bells on at 7:40 a.m. and as i drove into the parking lot, the lack of fellow cars made me believe that i had hatched an original idea -amateurs, i was the only one with the wherewithal to arrive early and all of the goodies will be MINE, mine i say! yeah i get that greedy when there are deals to be had. you know what happens when one assumes things such as this? they get a healthy dose of humility. because not more than five minutes after putting the hyndai in idle did women of all ages start appearing around me. fine, i thought, we’ll all just wait in our cars like civilized individuals. plus, i mean, it was freezing outside, there was no need for us to get all crazy and take this waiting game outdoors. that would just be irresponsible. but apparently in north county, we like to get irresponsible because out of the corner of my eye i saw her. dressed in her high school sports team warm-up track suit, the teen had decided to wait the final minutes before opening time al fresco, and positioned in a very opportune spot directly in front of the main entrance doors. she was quickly followed by what i could only deduce to be her older sister and mother. well played, ladies. six hands are better than two. and just like that women began pouring out of minivans and moderately-priced sedans and fashioned themselves in a clumped filing system behind the teen and her family. what a bunch of lemmings, i thought, as i, too made my way out of the safety and warmth of my car to claim my spot amongst the bunch.

copious amounts of side eye and sentiments of “cut me in line and i’ll cut you” filled the air. sure, grit smiles were flashed when their eyes caught mine, but i knew once inside, it would be a whole different ball game. so i paced myself and prayed for a civilized fight once 8 a.m. rolled around.

finally, at approximately 7:59 a.m. a red vest-clad target employee unlocked the doors and like animals released from their pen, we all made a bee line toward the well-stocked display. now, the original teen, her sister, and mother took off running, but you know, i have standards, so i kept my pace to a brisk walk. but apparently my adherence to maintaining any sort of social dignity was a poorly made decision because no sooner had i reached my long since lusted-over white and floral dress was it all but instantaneously snatched up by my fellow bargainistas. ladies grabbed two, three, four, of the same garment in every size under 10. in that moment i couldn’t help but think of the old SNL skit with chris farley where he begins devouring all of david spade and adam sandler’s french fries.

cindy, could you leave some for us?

trying not to get discouraged by my missed opportunity to make the white dress my closet’s newest addition, i  set my sights on landing the next must-have item on my list: the white silk blouse with black lace overlay. lucky for me, all of the crazies were too consumed with scoring the most ebay-able items (my concluded reasoning for their apparent aggression), and i was free to locate the perfect-for-work-or-for-play blouse in not one, but two different sizes (am i a small or an extra-small? i don’t know but i would like the option to find out) with little to no resistance.

and when i was over getting near-mauled (that is a gross over-exaggeration but it’s good for dramatic effect), i headed over to the shoe section to see if i could get my paws on some designer kicks. now why most retailers are so fickle with their offering of size 9.5 i’ll never know because while 7.5 and 8.5 are usually readily available, it’s like 9.5 is the long forgotten red-headed step-child and gets no love when it comes to shoes. so therefore us gals with a foot-size in between a nine and ten are left with little to no options. still hopeful, i grabbed a nine in two styles and a ten in another for good measure. but when i could barely squeeze my less than narrow (see also: wide) flipper into the nines, i could soon see the writing on the wall. whatever multi-colored pumps, i didn’t want to take you home anyway. you’re probably not even comfortable for more than eight seconds and while i was raised under the guise that sometimes pain for beauty is necessary, i don’t carry that principle into my rules of footwear. momma’s gotta walk in them if they’re going to be added to my collection. plus eliminating pumps and sandals from my final bill saved me at least $80 bucks.

so with my lace tops in hand (and another dress that’s really not even worth mentioning seeing as it made me feel very matronly), i ventured into the family-sized dressing room to sample my wares. and by sample i mean try them on and admire myself in the mirror. because one, i’m that vain, and two, i really wanted to get a good instagram so that all of my friends could commend me on my early morning shopping shenanigans. again, did i mentioned that i’m vain? 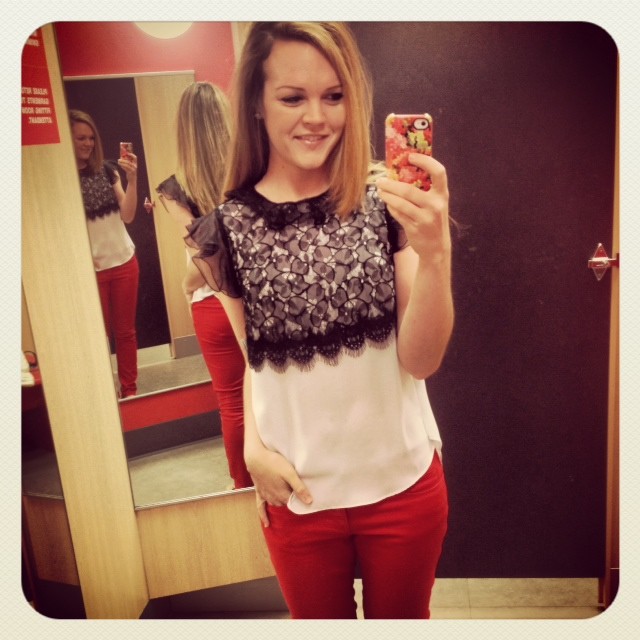 turns out the extra-small fit like a glove and as the hour of my necessary departure to make church on time neared, i figured that one piece was better than none piece and made my way toward the check-out line without another thought. so $32.33 later, i am now the proud owner of a blouse from the prabal gurung for target spring collection -a reminder of a morning spent fending off a few of north county’s aggressive pre-teens and their more aggressive mothers. and a keepsake of a time where i, too became that crazy girl you hear stories about who waits in front of store front doors willing them to open just so she can snag herself a deal.

and you know what? the rush is kind of intoxicating. not enough to make me want to do it again any time soon, but you know, don’t think you’ve seen the last of me, fellow bargainistas. only next time, i’ll be the teen in the high school athletic track-suit, or well, the better dressed version 10 years her senior.