i can’t help but think that good books are like old friends. and at this moment i think i’m ripping off someone famous’ quote and for that i’ll go google it and give them credit where credit is due. hold please.

i think i found it. it’s by paul sweeney and it’s not exactly the sentiments i was going for, but you know, it’s close: “You know you’ve read a good book when you turn the last page and feel a little as if you have lost a friend.”

i’m over thinking this, but what’s new? basically what i’m trying to say is that there have been certain books in my past reading repertoire that have really resonated with me and upon their conclusion, i felt a little like that feeling you get when you have to say goodbye to a close friend when they, say for instance, move across the country or something (looking at you, b).

but the cool thing about books is that you can read them over and over again. unless you borrowed them from the library which, if that’s the case -a) look at you being all old-school with a library card (readers are leaders) and b) you should really look into returning those because there’s nothing scarier than a librarian scorned. and no matter how much time has passed in between, once you crack open the pages and take in the first lines, you are immediately reminded of what makes this particular read so special -just like, what do you know?, that feeling you get when you’re reunited with an old friend!

it took me a while but i think i finally closed the loop on that metaphor. which is good because i think i’ve finally made it to my point, which is also good considering you all but assumed that i simply didn’t have one (and you know what? that’s totally valid). right. my point.

i recently bought a shiny copy of tina fey’s bossypants. after borrowing it from a friend and reading it on the way to and from one of my many up in the air adventures last year, i figured it was high time i owned a copy of my own. and though i purchased it a good month ago, i have been saving my third venture through its pages until my trip to nashville that is now only two weeks away (how did that happen?). and i’ve been pretty darn good at sticking to that plan, that is, until today when i decided to google “top quotes from bossypants.” because today just warranted some lol’s and who better to provide me with those than tina herself?

and i found these gems:

“Most photographers have some kind of verbal patter going on when they shoot: “Great. Turn to me. Big smile. Less shark eyes. Have fun with it. Not like that.” Some photographers are compulsively effusive. “Beautiful. Amazing. Gorgeous! Ugh, so gorgeous!” they yell at shutter speed. If you are anything less than insane, you will realize this is not sincere. It’s hard to take because it’s more positive feedback than you’ve received in your entire life thrown at you in fifteen seconds. It would be like going jogging while someone rode next to you in a slow-moving car, yelling, “Yes! You are Carl Lewis! You’re breaking a world record right now. Amazing! You are fast. You’re going very fast, yes!” (via)

“But I think the first real change in women’s body image came when JLo turned it butt-style. That was the first time that having a large-scale situation in the back was part of mainstream American beauty. Girls wanted butts now. Men were free to admit that they had always enjoyed them. And then, what felt like moments later, boom—Beyoncé brought the leg meat. A back porch and thick muscular legs were now widely admired. And from that day forward, women embraced their diversity and realized that all shapes and sizes are beautiful. Ah ha ha. No. I’m totally messing with you. All Beyonce and JLo have done is add to the laundry list of attributes women must have to qualify as beautiful. Now every girl is expected to have Caucasian blue eyes, full Spanish lips, a classic button nose, hairless Asian skin with a California tan, a Jamaican dance hall ass, long Swedish legs, small Japanese feet, the abs of a lesbian gym owner, the hips of a nine-year-old boy, the arms of Michelle Obama, and doll tits. The person closest to actually achieving this look is Kim Kardashian, who, as we know, was made by Russian scientists to sabotage our athletes.” (via)

and like grabbing dinner with your bestie from the sixth grade after nine years apart, these quotes reminded me just how awesome it is to be reunited with an old friend. my old friend being tina fey which is like totally normal, because hi, i have lots of celebrity friends.

but seriously, i just really can’t wait to annoy my fellow southwest passengers with my snorts and cackling as i tear through bossypants for a third time. those belly laughs, like the peanuts, are complimentary. so you know, you’re welcome in advance. 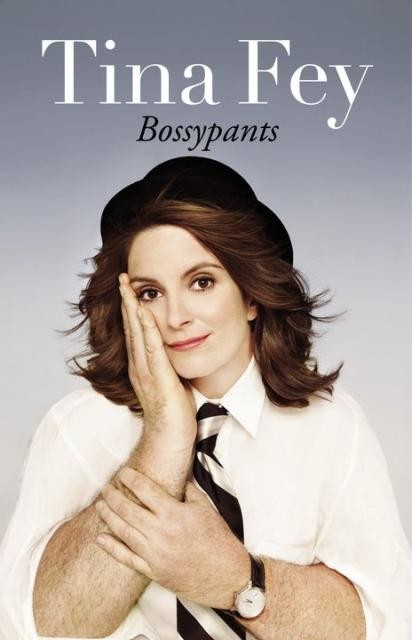