i’m a big fan of traditions. like how every year my family and i see a movie on christmas day or how my girlfriend comes over every monday to watch the bachelor. like how most saturday mornings i can be found devouring a bowl of oatmeal at honey’s bistro in encinitas or how i visit trader joe’s and/or sprouts on most days that end in “y.” to me, traditions are like little google calendar events that you don’t actually set a reminder for because they are just part of your normal routine. just like how on wednesdays we wear pink, you know that on that specific day or at that specific time, that specific event will indeed occur. and there’s comfort in that.

in college, following our sunday morning church service, my friends and i would usually all go somewhere for brunch. marmalade, coogie’s, heck, even it was just an extended stay at starbucks, we’d make a point to take a few more hours in each others’ company to break bread (and eggs, and waffles, and other delicious breakfasty foods) before it was back to writing papers, reading textbooks, and whatever else we did in college to glean knowledge.

but then we graduated and kind of all went our separate ways. and while i’ve certainly tried by my own efforts to keep the tradition of sunday brunching alive and well, most certainly when i returned to america’s finest in 2007, unlike my habitual visits to grocery stores, the brunching tradish has all but become non-existent in my recent past. and maybe that’s because until very recently, i was a one-(wo)man church attender. occasionally, i would run into friends who just happened to be attending the same service as me, but for the most part, i’ve become quite accustomed to ride solo to the sanctuary. so the whole building community by brunching after church thing kind of fell to the wayside. because while i know i’m pretty good company, too many dates with me, myself, and i in the public arena might warrant some unwelcomed attention/company from the middle-aged men i often encounter in some of north county’s top places to enjoy a midday meal. because apparently when i didn’t fill the chair across from me with a warm body, that meant i was saving it for you.

the past two sundays i’ve reinstated the brunching-after-church tradition. and i must say, it feels pretty good to have it back in the social calendar repertoire. on this most recent sunday, following pastor mark’s refreshing take on the tried and true story of noah and the ark, L and i were treated to an extra special brunch at gabardine eats in point loma. now it just so happened that our meal was being taken care of by the powers at be in exchange for a glowing review on AskMissA, but despite the added incentive, we really did have a lovely time.

if you aren’t familiar with gabardine, it’s the fourth of the acclaimed social fabric family restaurants (seersucker, burlap, gingham, and now, herringbone) started by top chef alum brian malarkey. located on the corner of rosecrans and right across from the living room coffee shop, it has a retro vibe and a laid back feel with nautical-themed decor in the form of fishing pole light fixtures, a giant lobster mural, and scattered silhouettes of gabby the swimmer -a 40’s-style bathing suit clad lady whose image is the restaurant’s unofficial symbol. i mean, forget pinterest, i could take all the inspiration i needed for a living room decor overhaul from gabardine’s interior. from the chalkboard wall behind the bar to the adorable anthropologie-esque glassware (see below) that i may or may not have seriously contemplated pocketing (but thought better of, obvi), i’d like to hire the decorators of the point loma eatery to come revamp my chambers. 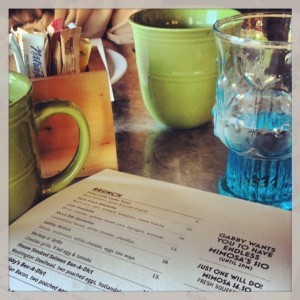 look at those cups.

and then there was our meal itself. L and i both ordered the farm fresh omelette made with a garden’s-worth of ingredients (spinach, tomatoes and corn, oh my!) that came served alongside a hearty portion of crispy potatoes and a green salad. we did not hate our meals. as evidenced by our almost-cleaned plates. 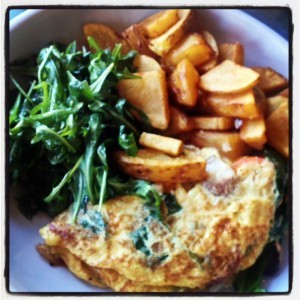 get in mah belly.

also, side note: eggs are highly underrated. i used to think i hated them (just on principle, kind of how i thought i hated avocados until i actually tried them and learned that i had been so very wrong for so many years) but then i tried them (with ketchup, of course) and found out the contrary was indeed fact. i love them and really don’t consume them often enough. now let’s not get crazy here, i’m never giving up my oatmeal, but for future brunching outings, i am going to make it a point to throw an egg-centric dish into the mix every now and again.

which leads me back to my first point -the brunching tradition. let’s reinstate it. and by “let’s” i mean, i am going to reinstate it and if you care to join me then please let me know via social media, smoke signals, or carrier pigeon. while i can’t always promise that our meal will be comp’ed, i can tell you that the company will be well worth the price of admission, or you know, the price of your meal.