say what you will about mr. mayer, but despite his questionable hat choices and even more questionable escapades in his personal life, i’ve always been and always will be a fan of his music. his 2003 clarity album is essentially the soundtrack of my freshman year of college, and i think the track “love is a verb” off his most recent cd born & raised will most likely make an appearance at my wedding someday.

but back to his questionable personal life choices. on tuesday, promoting his upcoming tour, mayer was a guest on ellen. clearly ellen was going to inquire about john’s very public romance with the bubbly and often-times blue-haired katy perry. clearly. and she did. in her endearing ellen way. side note -i think people naturally want to tell ellen things that they might not reveal on other talk shows. i feel like she just has this intangible niceness to her that just makes you feel like sharing your life story. i think oprah thinks she has that quality, but i think people are just intimidated by her. with ellen, i can imagine you feel like you’re just catching up with an old gal pal. a gal pal who just happens to have her own studio audience and dj, but a gal pal nonetheless. plus she’s so funny. honestly, i love her. but back to john.

now i’m sure he’s not completely reformed, but i think montana changed him (if you didn’t know, he took a two-ish year hiatus and moved to montana to live the cowboy/open range life). i mean, we know it changed his style of dress and his temporary abhorrence to haircuts, but also i think he’s kind of learned his lesson a bit. and in the ellen interview i heard on the radio on wednesday morning, i couldn’t help but nod along with his sentiments about the world of dating. or as he calls it, “coupling.”

coupling IS, in fact, a tricky thing.

john mayer, unlikely source of wisdom. and the owner of one ridiculous hat collection. 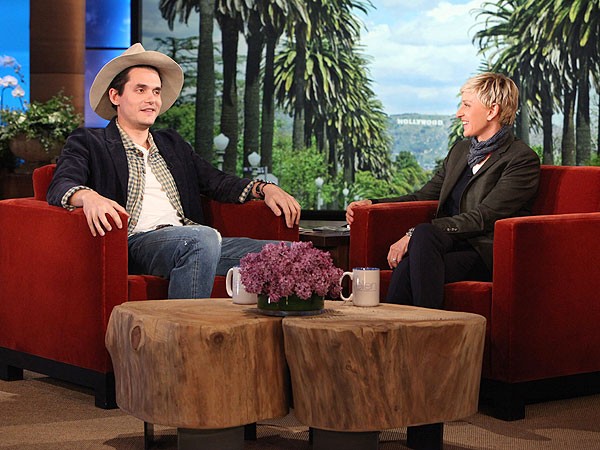