einstein (and after i googled it, apparently a heck of a lot of other people did, too) once said that we should never stop learning. if by “learning” he meant, “never stop committing to memory random celebrity facts for use as ice breakers at social functions when the conversation has reached a lull” then, i’m pretty sure i’m making albie proud.

but since i’m fairly certain that’s not exactly what the old father of relativity had in mind, i’ve taken it upon myself to learn a new craft. i know, i’m impressed, too. and the venture i’ve chosen to delve into? the art of calligraphy.

for years i have admired others’ pinterest-worthy handwriting, growing greener with envy with each passing perfectly lettered envelope i received for so-and-so’s wedding and what’s her name’s baby shower. right now you may be thinking, “but shawna, your handwriting is beautiful, you have nothing to be jealous about!” and to you i would say, well, first of all, thank you, and secondly, you do indeed have a point. my handwriting is beautiful.

but now we’re getting side-tracked and also, i’m looking pretty full of myself right about now (remind me again how that is any different than about 95% of my posts?).

in all seriousness though, i’ve always had a fascination with hand-written fonts and the beauty that can be found in lettering. funnily enough, while all of my fellow students were probably drawing inappropriate caricatures on their geometry notes, i was practicing writing “mrs. shawna roddick” on my spare sheets of loose-leaf (college-ruled, duh). there may have been a flower or two in the mix, but ever since i can remember, whenever i’ve been caught doodling, it has always been with letters not pictures.

so after a recent trip to paper source reignited my interest in taking up the art of fancy doodling, i googled, ahem, momma googled (because she’s obnoxiously good at googling things), just where i could in fact learn calligraphy. turns out calligraphers are hard to come by in san diego. momma’s search turned up a whopping two entries. huh, apparently america’s finest city isn’t too concerned with having america’s finest handwriting…

but one of them looked pretty promising, and was FREE so i emailed the instructor to inquire about details. she was more than helpful and her description of what was to be covered in the hour and forty-five minute session made me quite intrigued, so on the following day’s lunch break, i nervously called up the reception desk at the local university library where the class will be held in june and asked to be added to the list. in exchange for my name and phone number, my spot was solidified.

and just like that, i’m well on my way to earning myself a place amongst the handwriting savants of pinterest. or in the very least, my doodles just got a whole lot fancier. 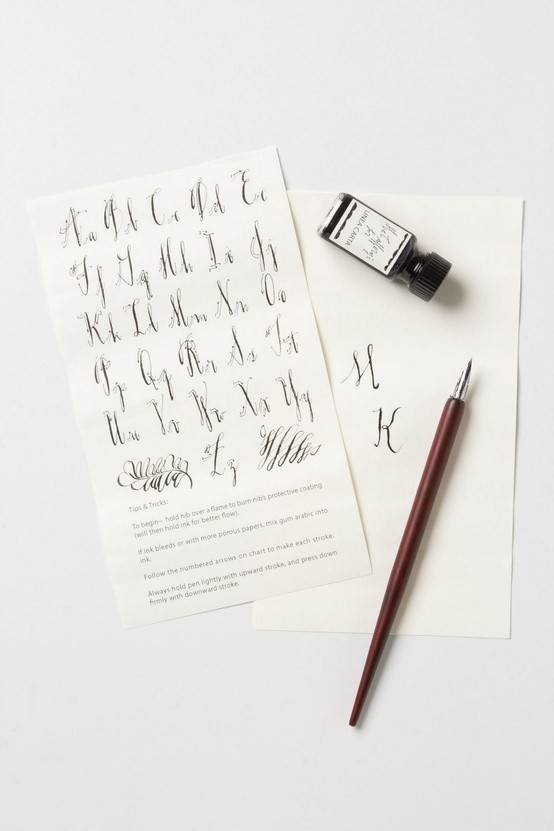