i stumbled upon this article from ew.com this evening and oh mylanta, i could not not repost it. for anyone who has ever traveled to dillon, texas and left their heart there (which, i mean, who hasn’t?), i give you ten things learned from the friday night lights reunion. yes, there was a reunion. apparently it took place last friday. and apparently my invitation was lost in the mail.

On Friday night in Austin, Tex., some of your favorite Friday Night Lights cast members gathered at sunset to drink Shiner Bock in a parking lot and reminisce about the glory days. This was not a dream. It was a stellar event put on by the good folks at the ATX Television Festival who’d organized a free outdoor screening of the season 1 season finale. (The next morning the thrills kept coming, as stars Kyle Chandler and Connie Britton surprised fans by dropping in unannounced on the FNL cast panel.) But on Friday, the show belonged to actors Scott Porter (Street), Gaius Charles (Smash), Louanne Stephens (Grandma Saracen!), Brad Leland (Buddy Garrity), Stephanie Hunt (Devon), Katherine Willis (Mrs. Street), Matt Lauria (Luke Cafferty), and Lamarcus Tinker (Tinker), who spoke with EW exclusively about their most treasured memories of working on the greatest show ever. Here are 10 of the best:

1. Scott Porter on Taylor Kitsch’s audition tape for Tim Riggins: “The camera turns on and you just see a leg.Then you see Kitsch sit back in a chair and he just looks into the camera. There’s a tall-boy next to him and he reaches down, grabs it, puts it on one leg, cracks it open with one hand, drinks the whole tall-boy, puts it down, grabs the second one, cracks it open with one hand and goes [in Canadian accent] ‘This is Taylor Kitsch, reading for Riggins.’ And then he begins the scene by the pool where he says ‘Texas forever’ for the first time.”

2. FNL creator Peter Berg wasn’t going to let his cast ever feel beat up by the ongoing threat of cancellation: “I opened my door one day and there were boxing gloves hanging in my trailer from Pete,” remembers Charles. “Which was him saying we were going to fight, we were going to keep going. His slogan was ‘Nobody pushes us around.’”

3. The scenes that made the cast laugh hardest: “Any time Landry and Matt were together,” says Stephens. “Going shopping for clothes, or just throwing the football out front.” “Jesse Plemons face, any moment, ever,” says Leland.

5. One more Plemons regret: “On this show it wasn’t about the actors you most loved working with, but the regret of ones you don’t,” says Porter. “I never had a scene with Jesse Plemons. I was in a scene once where he was performing but we never spoke a line to each other. Which is weird because he and I are still so close. We live five minutes from each other in Los Angeles and we hang out still to this day.”

6. Leland begged for Buddy Garrity to get some girlfriend or wife action for two years to no avail. He hasn’t gotten over that.

7. Speaking of action, a half-naked Buddy Garrity once jumped into bed with Coach and Tami: “Kyle and Connie were in bed together shooting an intimate scene,” says Leland. “So they’re having this romantic interlude and during the take the director let me run in there and jump in bed with them. And I only had on a pair of gym shorts, and it was a hot night and I was probably sweaty. It grossed Connie out so bad. She started yelling ‘Ewwwww, get him out of here!’”

8. Best thing Taylor Kitsch brought to the show (besides biceps, beautiful tortured face, everything): “Street’s nickname ‘Six’ wasn’t on the page,” says Porter. “That was Kitsch. When he walked into the hospital room in season 1 and finally comes to see me for the first time? Instead of saying what was on the page he said ‘Six’ and it stuck.”

9. Leland kept three pairs of Buddy Garrity’s $750 prescription Oakley sunglasses, but Porter has the best FNL loot: “I have both my home and away jerseys, signed by everyone on the show. I have a football signed by everyone who ever played football on the show that I won at an auction And I have my state championship ring, which is apparently one of six in existence. Everyone else had to turn theirs in at the end of the day but I had mine hanging on a leather necklace and just tucked it under my shirt.”

10. The time Kitsch and Porter cried saying goodbye. “In the scene where Riggins and Six were saying goodbye in New York, and Riggins was getting ready to say ‘Texas Forever’ and head off in the cab, it took us 25 minutes to even attempt a take because we were just bawling. Taylor, I couldn’t believe it, was just like ‘I can’t, I can’t, I can’t, hold on…’ And then it got me going. It took us 25 minutes to get it together and then we did it in one take and he got in the cab and left.”

i think this weekend might be the weekend this box set gets opened. 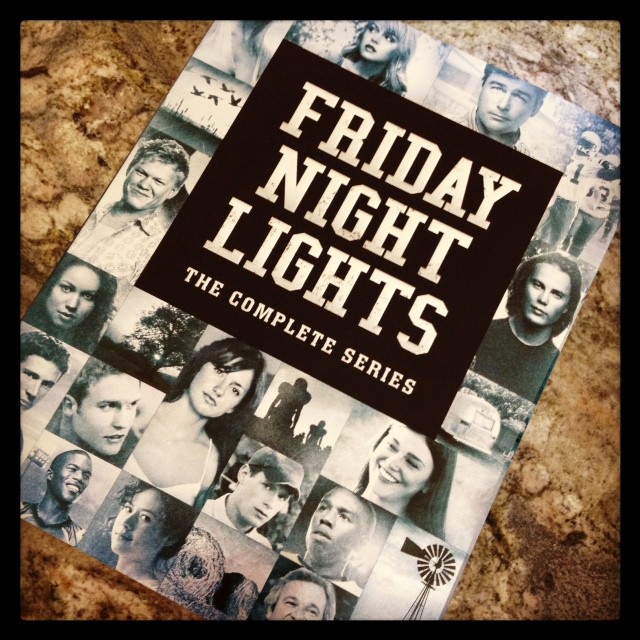