in the world of self-expression, they say you should write about what you know. which, i mean, makes perfect sense. why would i write about cars or most things associated with water-sports when clearly i’m no expert in those fields? precisely.

so much to your chagrin, i write about failed relationships or fashion, or anything having to do with reality tv and celebrity gossip. because this is what i know. but there’s another side of me that you might not be as familiar with. the part of me that has faced hardships, deeper ones than just the melodrama that i evoke when yet again a boy doesn’t want to make his boo. i rarely write about those times, mostly because they aren’t always fun to read (or to write) and i try to keep this a happy little corner in the internet.

however, just because i don’t write about these less than desirable topics of which i claim to have some sort of formidable knowledge, doesn’t mean that they shouldn’t be expressed every once in a while. if anything for the fact that in getting these thoughts and sentiments out on paper (or on computer screen), it offers therapeutic reprieve for yours truly. so i asked my editor at darling magazine if i could by chance compose an article about a topic near and dear to my heart. a topic you may not even know i knew anything about. but i think it’s time i share it with you. if nothing more than to tell you that i know firsthand the power of forgiveness and how much freedom lies within its walls.

forgiveness in the family
an article published on darling online
by: shawna nadelman (that’s me!)

While we’re given the freedom to pick our friends, the clothes we wear, and our favorite flavor of ice cream, the ability to pick our family members is unfortunately not something we were ever offered. If you watch Parenthood, you may see why, if given the choice, I would opt to be a member of the Braverman clan, but the family I was born into wasn’t something I had much control over when I entered into this world that morning in June.

Let me make one thing clear: I love my father. I always have. And every time I look in the mirror, I see his eyes, his chin, and when I get down on myself for achieving anything short of perfection in my daily tasks, I see his stubborn attention to detail and over-achiever attitude. But over the course of our nearly 28 years of father-daughterhood, we have faced some trials that have put heavy strains on our relationship.

My parents got divorced when I was very young. Both Mom and Dad remarried and started new separate families and over the course of my childhood, I traveled between the two homes, making sure to form and cultivate relationships with both my biological Dad and Step-Dad. But as I entered into adolescence, the strain of ping-ponging back and forth started to wear on me. And to make a very long story short, by the time I left for college, the bond I had spent years building with my biological father was unfortunately near non-existent. A birthday card here, a phone call there, but for the most part, we didn’t have contact during my collegiate years. And with each passing milestone missed, and holiday uncelebrated together, I began to build a wall around my heart. Brick, by brick, missed birthday by missed birthday. Until I was so hardened by the mere thought of reconciliation. I became defensive, irritable at the mere mention of his name. How dare someone even question my harbored resentment? They didn’t know how deep my wounds ran. I felt so entitled to my anger, as if it was some sort of badge of honor for the rough waters I had navigated for so long. And I shuddered at the thought of letting it go.

Then one day, in hearing about the passing of one of my friend’s family members, it hit me. What if my father was diagnosed with some sort of inoperable disease, or passed away suddenly of a heart attack and I was never given the opportunity to make amends? The thought of never being able to restore our bond scared me more than the reconciliation itself. But I wasn’t ready to come forward just yet. Instead, I started to prepare my heart for loving him again. Slowly but surely, I began to release all of the anger I had been holding onto for so many years. Almost immediately, I felt lighter, freer, as if a 100-pound weight had been lifted off my back. Unbeknownst to him, I forgave him in my heart. And almost as soon as I did this in secret, I received an email from him with an apology and an invitation for lunch where we could discuss the possibility of starting over again. It’s as if he knew that the forgiveness was already there for the taking, all I needed him to do was make the first move. And when he did, I was honestly, for the first time in a long time, really excited and hopeful for where this lunch would lead.

Over salads in a restaurant with an ocean view, we cried happy tears together. Exchanging apologies for things said, things unsaid, and for all of the time wasted in not fostering the incredible gift a father-daughter relationship is meant to be. Right there on a February afternoon, we committed to a fresh start. And the days, weeks, months, and years since have been radically different. They have not only taught me the importance of forgiveness, but of grace, and love, and second chances. It truly is never too late to start over. And hitting the “reset” button on my father’s and my relationship has been one of the best decisions I have ever made.

So if you’re ready to make the decision to hit the “reset” button on one of your own relationships with a family member, a few words of counsel that have certainly helped me:

Rework forgiveness into your repertoire. Forgiveness isn’t a four-letter word, but sometimes it feels that way. We’re human—when it comes to accepting an apology, or at times, forgiving in spite of an “I’m sorry,” our stubborn pride gets in the way. When we’ve harbored anger and resentment for so long, sometimes releasing it feels like a defeat. But I assure you, the real defeat is allowing that resentment to continue to occupy your life. Like a disease, resentment can, when given the power, creep into other parts of your life, making you hardened and cold. Tell your pride to take a hike and work forgiveness into your vocabulary again.

Practice selective memory. Once the forgiveness has been made and the relationship is in repair, do your best to forget the past. Be mindful of what it has taught you, but vow to move forward with a freshly cleaned slate. I once heard a metaphor relating the future and past to parts on a car. There’s truth to why the windshield is so large and the rear view mirror is much smaller. The view out the front is much more important than the view out the back. I’d imagine that it’s pretty difficult to maneuver yourself forward when you’re only using your past as the navigator. So make the conscious decision to have a windshield-view in terms of your reconciled relationship.

Let go. Reconciling a relationship is a team effort. One person’s over-devotion to the cause does not make up for another’s under-devotion. Both parties must be willing and committed to the rehabilitation of the relationship. If you find yourself with the heavier load, let go. Don’t completely abandon the efforts, but give yourself a little time to rest. Oftentimes when we desire something so badly, we exhaust ourselves trying to make it happen -like trying to force a square peg in a round hole. Once we stop trying so hard, things have a way of working themselves out at just the right time.

Be realistic. I know firsthand how exciting it is to have a second chance at a fallen relationship. However, it’s important to be realistic in your attempts at rebuilding and cultivating the bond. It’s natural to want to rearrange your life in order to accommodate the other person. But Rome wasn’t built in a day. Similarly, a relationship takes time to nurture and grow. Set realistic goals in bringing back the bond from dormancy. And make sure the other party is doing the same. You’re in this thing together, so be sure to have open communication as to what you both can realistically do in order that the relationship gets the proper nutrition it needs. Chances are, you won’t be able to have a four-hour long conversation with them everyday—especially if the family member lives in another city, state, or country (time zones make things even trickier). But with technology these days, committing to checking in with each other regularly is something that you both can do no matter how busy your schedules may be.

But be intentional. It’s easy to get back into the routine of going through the motions in your relationship. But that might be how you ended up estranged in the first place. In order to truly make your second round a success, get to know the person as he/she is today. Don’t simply rely on your past knowledge and conceptions. Hopefully he/she has changed, so treat rediscovering your family member like you would a book or blouse in the back of your closet. Get to know him/her all over again through carved out quality time –a dinner date, a phone conversation, even an unexpected card in the mail can aid in making your intentions clear. Little gestures to let them know you’re committed to the future go a long way.

And finally, choose love. There will inevitably be times when your expectations for your renewed relationship will get too lofty for reality. Sometimes we hold people to impossible standards, much like we hold ourselves to impossible standards, too. Practice grace. Be slow to anger and when all else fails, choose love. When he/she disappoints you (more often than not, at no fault of their own, sometimes life has a funny way of getting in the way), don’t have a zero tolerance policy. Continue to employ forgiveness. As stated before, Rome took years to build, so in the same way, give your relationship time to grow on its own and extend love at every turn.

And if your relationship is anything like mine, it will grow. It will surprise you in ways you never knew possible. It will bless you and change you and your life will be enhanced as a result. The older I get, the more I realize how precious and brief life is. So spend your remaining days wisely –let go of the harbored resentment and forgive your family members. You may not have been able to pick them, but you can certainly pick how you how you approach a relationship with them from this day forward. 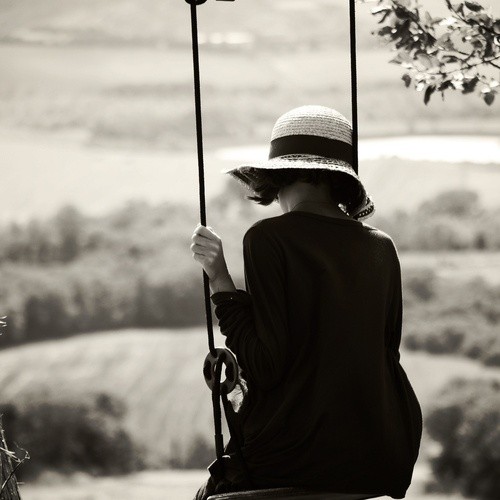