much like my long-standing love affair with oatmeal, frozen yogurt and i have been attached at the hip for almost as long as i can remember. before golden spoon experienced its 15 minutes of fame, it was just the neighborhood fro yo shop in downtown corona del mar. the site of many an afternoon snack from my grandmother and me -coffee flavored for her, classic vanilla topped with cookie dough for the little red-head. we’d sit on the bench overlooking PCH and take in the sights and sounds of the sleepy beach side town as we savored each creamy bite.

fast forward umpteen years when i found myself in my second year at pepperdine and very much over its cafeteria options. while some might equate college with sustaining on six packs of diet coke and top ramen, to me, college life will always be synonymous with copious amounts of cookies n’ cream soft serve from malibu yo.

and even long after i left the 90263 zip code did my love for fro yo live on. late night stops to yogurtland and swirl’s marked my summer nights and on evenings when the last thing i cared to do was lift a pot or pan.

but as much as i love to fill my belly with the creamy flavors of cookie batter and red velvet fro yo, turns out my belly doesn’t love me for doing so. and while i have for many years, endured the discomfort in the name of this tasty treat, i realize that that whole mind over matter thing shouldn’t really have to apply to eating foods that you know are going to make you crawl into the fetal position about 30 minutes after you consume them. so when i said hello to paleo, i said goodbye to fro yo. and my tummy has been much happier since.

but that doesn’t mean i’m not still human and have needs. needs that have me jonesin’ for a fro yo fix on nearly every day that ends in “y.” so when i remembered a post from a friend who has in recent years adopted a vegan lifestyle (see also: no dairy), i knew that all was not lost. banana soft serve was just the solution for my yogurtless plight!

so i rushed out to sprouts and bought myself a bunch of bananas, unsweetened cocoa, and a few raw cashews. and once home, i pulled ground cinnamon, vanilla extract and a few stevia packets from the cupboard. knowing that i had wanted to enjoy my tasty treat last friday evening, i chopped up the bananas the night before so they had time to freeze overnight.

when it was finally time to whip up my frozen faux-gurt, i ever so slightly de-thawed the nanners in the microwave before throwing them into the food processor where they would employ the help of magic elves to transform into light and fluffy soft serve. along with the bananas, i tossed in a couple of tablespoons of cocoa, two stevia packets, about a tablespoon of vanilla extract and a few shakes of cinnamon. round and round the blade spun, marrying the banana and chocolatey flavors until the mixture resembled that of a creamy substance.

i popped the lid, scraped down the sides and let it swirl for a few additional minutes to ensure all of the bananas had been properly mashed. i couldn’t get the fluffy mixture out of the food processor fast enough. i scooped my frozen faux-gurt into a big bowl, topped it with my crushed cashews and a few more sprinkles of cinnamon.

dessert was served. all of the fun of frozen yogurt without all of the unpleasant side effects. 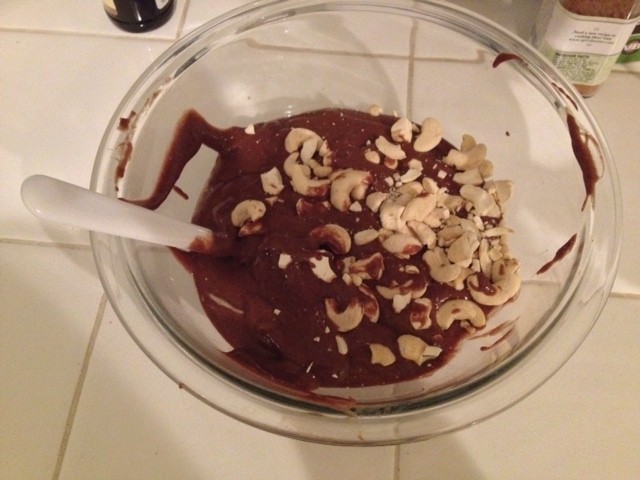 it tasted so much better than it looks.

p.s. to be honest, this was more like frozen faux-pudding than it was faux-gurt, but consistency aside, it was delicious and i licked the bowl clean.

p.p.s. here’s another link to a similar version of the recipe. you’re welcome in advance.