so in the culinary world, there’s a lot of trial and error. at least in the culinary world of yours truly. especially in this new(ish) paleo chapter. but i mean, not all of my attempts at becoming the paleo julia child can be home runs, right? i mean, where would the fun be in that?

truth be told, this latest paleoh no! (you like that? i was pretty pleased with myself for coming up with it) incident was actually at the hands of my chef-extraordinaire pops, but i was the one that suggested the recipe in the first place so i take full responsibility for its floundering fail. it was an unfortunate blunder too, considering that it came on the heels of such a deliciously successful paleo-friendly family meal of turkey burgers and greek salad (with that amazing avo-ziki dressing). but i suppose that’s the fun of experimentation in the kitchen, sometimes your efforts are awarded with happily appeased tummies and taste buds, and other times, your efforts result in, well, something that resembles baby diarr…, uh, you catch my drift.

now when i first read the moo-less chocolate mousse recipe from practical paleo, i was pretty intrigued by its bevy of ingredients. avocado? banana? tell me more! because despite popular opinion, i do like to end my meal with a little decadent treat every now and then. so when i realized that i could indulge in a dessert that not only satisfied my sweet tooth but also offered benefits to my overall health, i was ready to fire up the food processor and give it the old college try.

or you know, pass along the recipe to my pops for sunday’s dinner.

so he chopped and whipped and mixed and mashed. and then momma served it in cute little ramekins while we watched tia & tamara on the style network (i know, God bless my parents for what i make them watch). and after all was said and done, it wasn’t that bad. if you’re going to settle for a non-dairy chocolate mousse alternative, well, i still might suggest something else, but it definitely deserves an honorable mention, if only for the anti-oxidants and vitamin-rich ingredients. maybe it was the fact that despite the fact that it had a very heavy banana aftertaste (which i liked), the green specks of avocado still threw me for a loop. it was as if my mind and my taste buds were in a fight. in knowing the ingredients, my mind was all like ,”wait, avocados aren’t for dessert, they are for guacamole, silly” while my taste buds were like, “shut it, mind, we’re trying to pretend that this mousse is just as good as the kind we used to get at souplantation that’s probably full of chemicals but who cares it was so delicious.” so you can see where dessert was a bit more complicated than normal. anywho, even with the added vanilla and agave and honey and maple syrup (so we went a little overboard on the sweeteners, sue us), it was still just very odd. i did manage to consume probably about a quarter cup (with toasted hazelnuts and a generous helping of tru-whip (cool whip’s healthy alternative that may or may not be paleo-friendly)) before throwing in the towel and opting for a big bowl of fresh berries and coconut flakes instead. so a valiant effort. in both the eating and in the recipe-attempting.

i mean, like i said, they all can’t be home runs. sometimes you have to have a few paleoh nos! to balance out the paleomg! moments. and there have been many of those already (looking at you, pumpkin pancakes), so i feel pretty good about that.

anyway, if you’re brave enough to try your hand at a moo-less mousse, by all means. maybe your version will come out swimmingly or maybe your taste buds are just a lot more advanced than mine (i blame all of the years of diluting them with ketchup) but if the odds aren’t in your favor (oh yeah, i quoted hunger games, it seemed appropriate) don’t say that i didn’t warn you.

instructions:
scoop out the flesh of the avocados into a small food processor, or mash them by hand. add the cacao powder, coconut milk, ripe banana maple syrup, vanilla extract, cinnamon, and sea salt, and process until creamy, whipped and well blended. you may whisk the ingredients together as well, if necessary. serve chilled. garnish with cacao nibs, toasted hazelnuts or coconut. 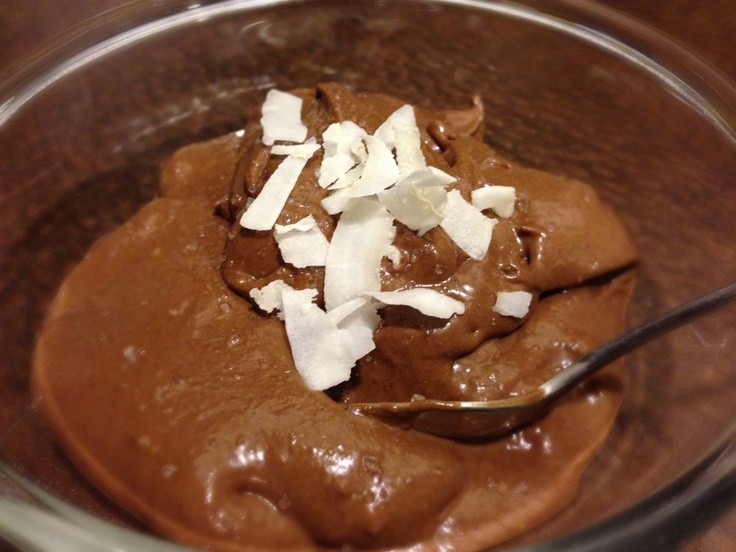