and “Gosh, this stuff is Good.”

and “Gone” as in, that’s exactly what’s going to happen to it if i don’t keep in mind the fact that nuts are really expensive.

g is also for “Giraffe“. but that’s neither here nor there, i just like giraffes.

anyway, as you may already know, i’m a pretty fancy broad and on most sundays i settle into the kitchen to make my crustless swirly quiche for breakfast for the week. this quiche is just so simple i’ve been living off of it for my morning meal on the daily -mixing in the casual paleo pancake when time allows on a lazy saturday or sunday morning. well in recounting this to my momma recently, she let me in on a little family secret. well, not so much of a secret as more of a concern shared by those of us with similar dna. it’s called “high cholesterol” and apparently the overabundance of huevos in my diet could be sabotaging my cause. well dandy. so she told me to be more cautious of my egg-intake and perhaps limit myself to three-four times per week.

but you know what happens when you try to cut back on those huevos in the morning hours while on the paleo diet? you starve. i mean, kidding. but really, besides egg-inspired meals, the most important meal of the day just involves meat. and vegetables. and i’m sorry, but those just don’t pair well with coffee.

enter JB, jerns’ and my soul sistah from another mistah and the author of both the blog PaleOMG and the cookbook, OMG, That’s Paleo?. not only is she absolutely hilarious, but her food is unbelievably delicious. i mean, because of her ingenuity, i was still able to enjoy birthday cake this year. so to say that i trust her food expertise would be an understatement. as jerns so eloquently put it once, “i ride and die by JB.” turns out, i do, too. so a quick search in her archives and i found my answer for my egg-less breakfast alternative: paleo granola!

so monday night, armed with my recipe list and my helpful tj’s employee friend derek (hi derek!), i tracked down all of the ingredients needed to create a week’s supply (yeah, right, more like 2-day’s supply, i mean, kidding, i believe in portion control) of granola. and after a shower and assembling my delicious summer salad for dinner, i combined all of the ingredients to turn out some of the most delectable granola i have ever tasted. and i’m not just saying that, y’all. it’s-finish-the-whole-batch-in-one-sitting delicious. and so easy to make! so if you’re looking to lower your cholesterol (note: i have no idea if this granola lowers cholesterol, i’m just saying that in eating it, you could be avoiding eating eggs and eggs could increase your cholesterol, so in a round-about way, you’re lowering your cholesterol, right? clearly i should be giving medical advice), i highly suggest you make this granola stat. plus, i mean, it makes your house smell like a dream. and who doesn’t want that?

instructions
preheat oven to 300 degrees. add all ingredients to a large microwavable bowl, except the fruit. mix well. if the honey is thick, heat up in the microwave for about 30 seconds and mix well. place on a baking sheet (use parchment paper for easy clean up) and bake for about 20-25 minutes, stirring occasionally to help it not burn. when you pull it out of the oven, mix in dried fruit. let cool.

i crumbled up the granola into little chunks and am currently storing it in a canister on my counter. i plan on pairing it with coconut or almond milk and a few more fresh berries. or you know, just plain and by the spoonful. 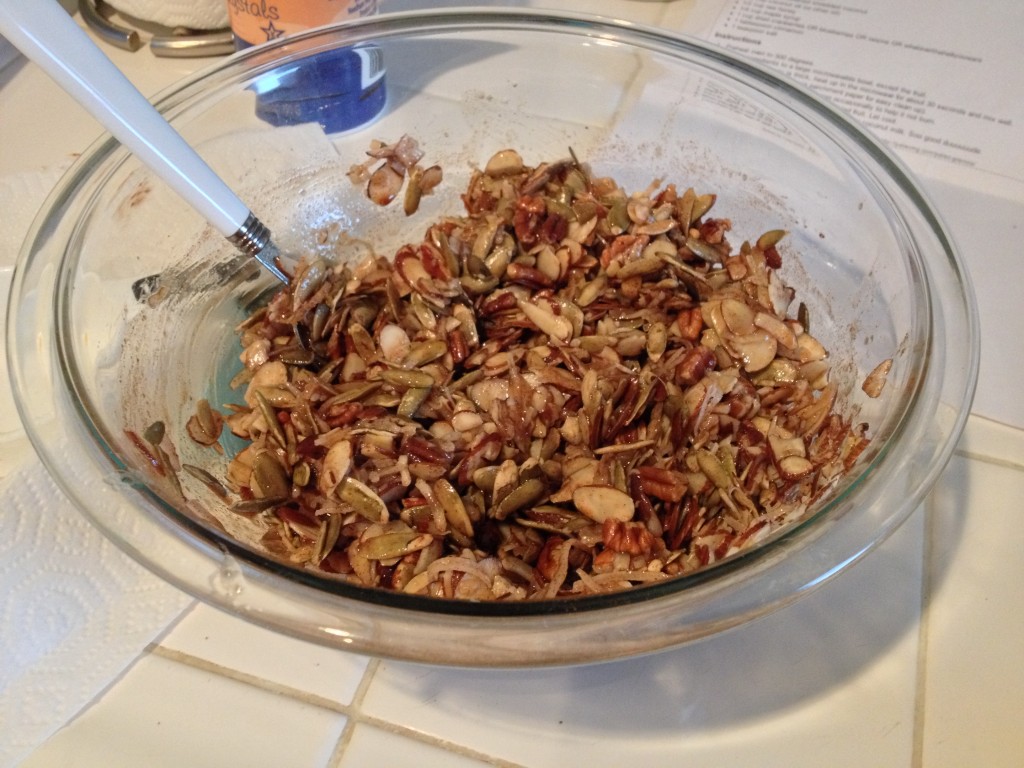 mix it all up. 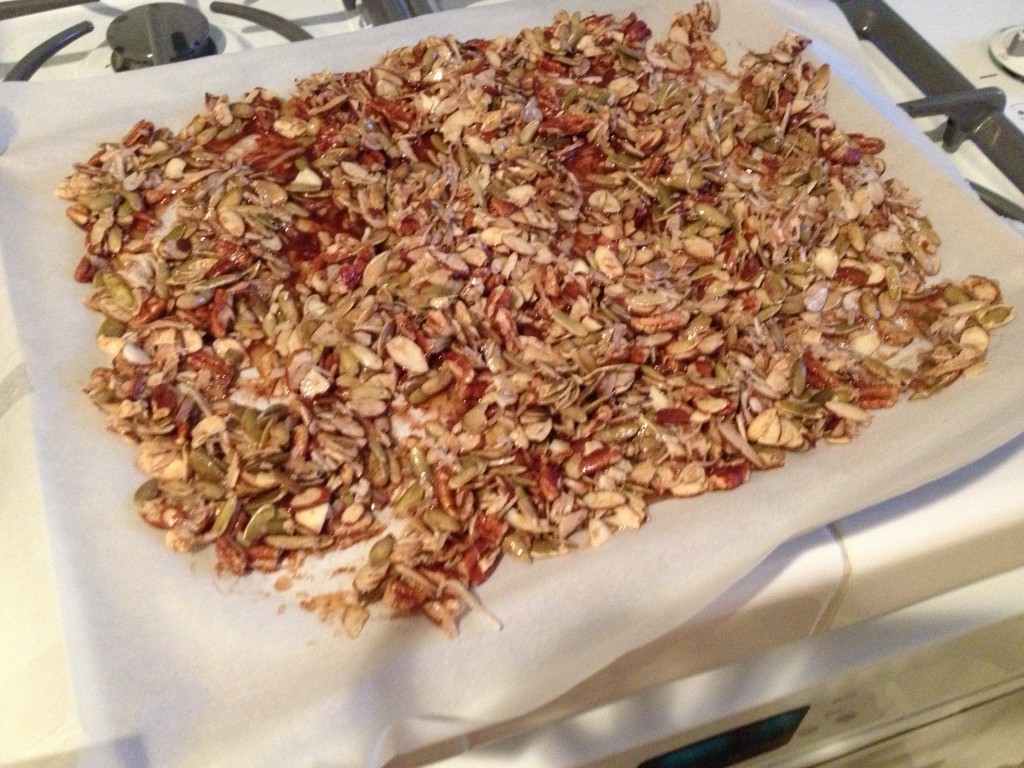 bake it on a sheet. 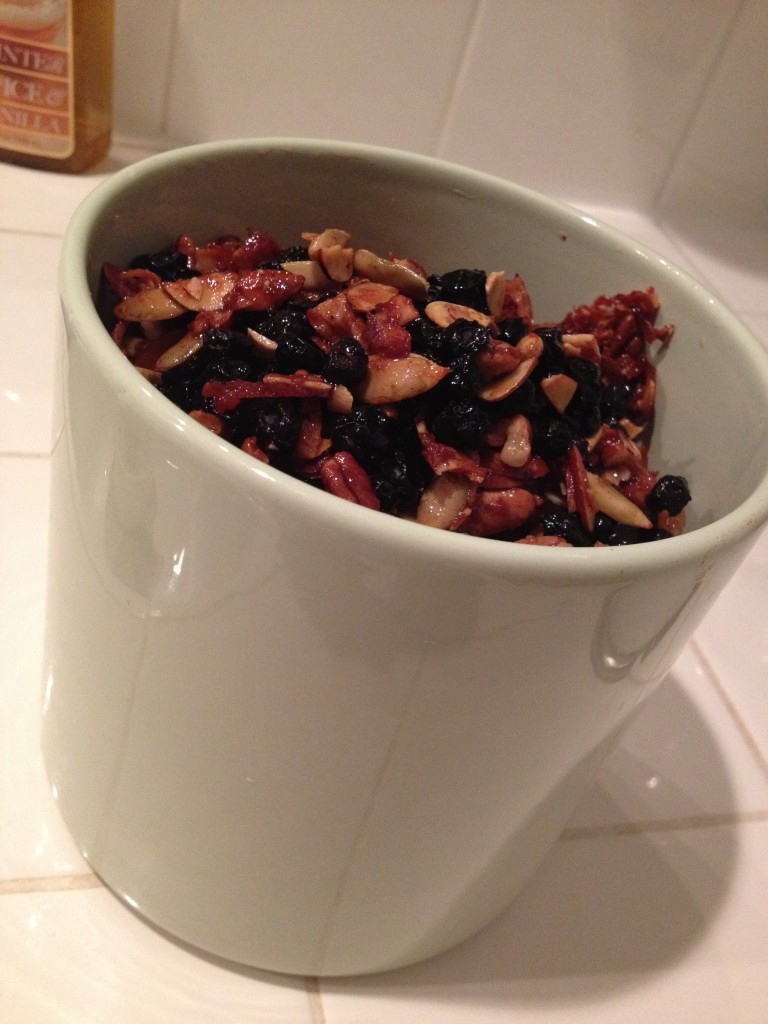 store it in a canister and try not to eat it all in one sitting.