i came across this pin today and i couldn’t help but chuckle. i feel like half of my life is doing just what mindy says: 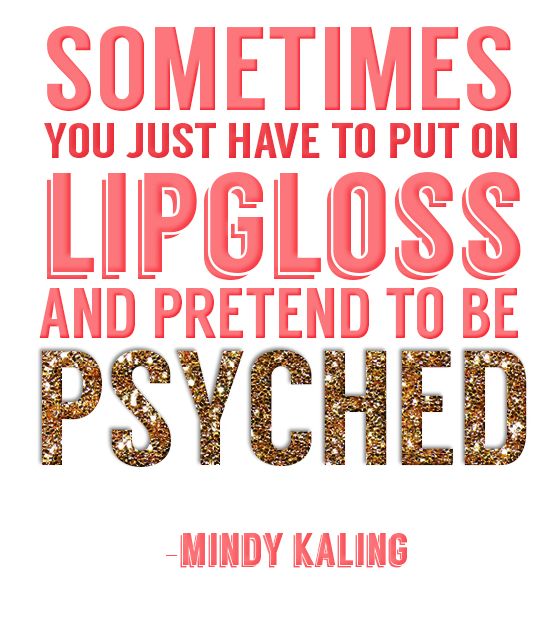 it’s this fake it ’til you make it mentality that i subscribe to. because i’m not gonna lie, left to my own devices i would become a recluse and own an abundance of cats and only go outside when i had to replenish my almond butter and coffee supplies.

but i think that happens when you do decide to make plans, be social, you know, shower is that there’s suddenly this pressure for the evening to be absolutely amazing. this better be worth missing say yes to the dress for. the element of the unknown and uncharted is enough to convince you to not even venture out at all. and maybe that’s where mindy’s advice rings truest. maybe it’s up to you to put on lip gloss (or whatever the equivalent for guys is, aftershave?) and act enthused. act like this night is going to be fabulous. that you would have major FOMO (fear of missing out) if you didn’t peel yourself off of the couch and go to so-and-so’s party and that simply “liking” the instagrams of people at said party is not the equivalent of experiencing it yourself.

true, not everything you sike yourself up for is going to deliver. i have been on a date or two that hardly trumped my habitual pajamas on the couch while watching a law & order: SVU marathon routine. but i have also ventured out on school nights, with precarious emotions, and been happily surprised of the result. half of the battle is simply getting yourself physically to the location, the rest is a mixture of an optimistic attitude and a really fierce outfit.

sometimes it’s easier to take the easy way out. decline the invitation, reschedule previously-made plans, forgo the weekend getaway. but sometimes you need to save yourself from, well, yourself. sometimes you need accept. say yes. and even when you come home from work and are tired and the last thing you want to do is put on going-out clothes and be charming for an evening (because being charming is exhausting), do it anyway. fake it ’til you make it. you’ll have a great time, i promise. you’ll be so thankful you went. your feigned enthusiasm will turn into actual enthusiasm. and you won’t have to worry about liking someone else’s instagrams because you’ll be posting photos of your own.