okay so here’s the thing. i feel like the brussels sprout has gotten a pretty bad wrap over the years. i mean, for one, it kind of looks like a baby cabbage and i’m not gonna lie i’m not the biggest fan of cabbage, so i could see why one would automatically have prejudice against it based on its similar appearance. but you guys, it’s so not a cabbage. and if cooked correctly, it’s so delicious. i mean, i’ll even go as far as to say that it has fast beaten out broccoli as my favorite vegetable. and if you know my love for broccoli (which you might not because i don’t divulge that often), you know how lofty of a statement that is.

anyway, with thanksgiving a month away from today and the need for delicious side dishes in your imminent future, i figured i’d round up a few of my favorite preparations of the humble sprout that hails from brussels.

side note: whenever i think of brussels sprouts i kind of want to sing that men at work song “i come from a land down under” because of that one line that says, “buying bread from a man in brussels/he was six-foot-four and full of muscles…” obviously the song is actually about a guy from australia but it mentions brussels so it’s kind of correlated, right? if you ever wondered how my brain works, well, now you know.

but back to the sprouts.

my top five recipes to try to make you fall in love (and your family/loved ones/guy you’re newly dating also fall in love) with brussels sprouts.

image via: my recipes.

made this dish for thanksgiving one year. two words: game changer. i mean, step aside green bean casserole, there’s a new vegetable dish in town. 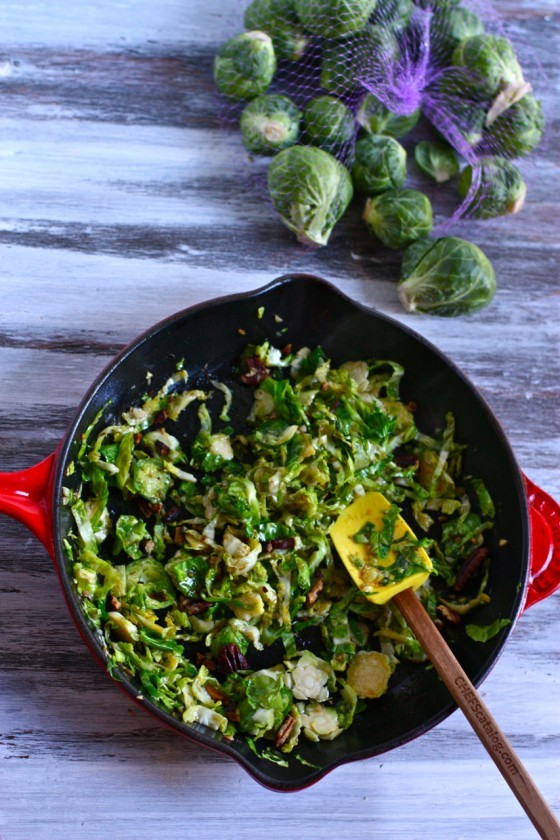 directions:
slice each brussels sprout very thin until you have a mound of feathery brussels sprout ribbons. Heat the olive oil over medium high in a large skillet and saute the garlic for 30 seconds. Add the brussels sprouts and continue sauteing for another 4-5 minutes, until bright green and tender. add the sea salt and brown sugar and toss together. finish by adding the toasted nuts.

jenna from eat live run blog fame is kind of amazing (homegirl just wrote a book!) and her recipes are no different. plus her food photography is enough to make you drool all over your computer keyboard. i’m currently wiping up mine after lusting over the above sprouts. 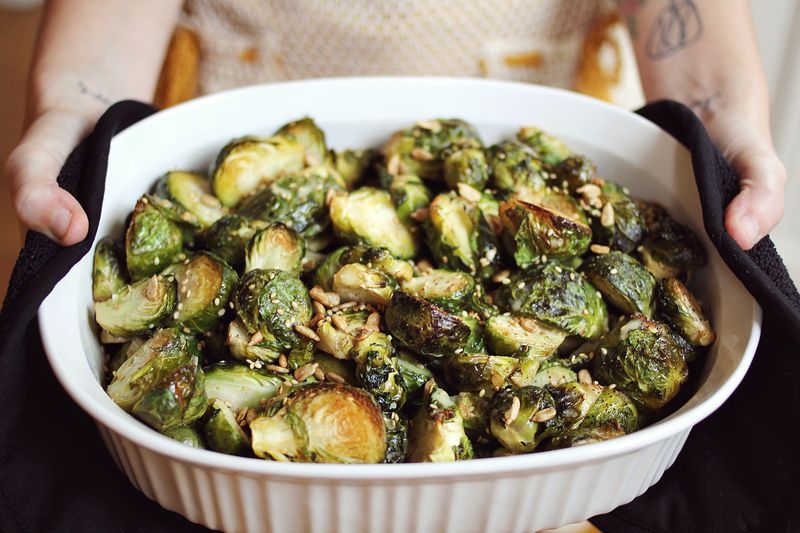 image via: a beautiful mess

directions:
rinse sprouts. slice the sprouts in half and place in bowl. coat with the oil and a few sprinkles of salt and pepper. bake at 350°F for 26-30 minutes. in a small mason jar combine the mustard and vinegar. secure the lid and shake to combine. once the sprouts are done pour on the dressing and stir to make sure all sprouts get evenly coated. sprinkle on the nuts and serve hot.

i just heart the sister duo of elsie and emma, the brains behind the amazingly inspiring and adorably eclectic a beautiful mess blog. while i haven’t tried this recipe myself, the use of dijon mustard and sesame seeds definitely has me intrigued. i may or may not have to test this out during an upcoming dinner party (you know, when i throw one of those). 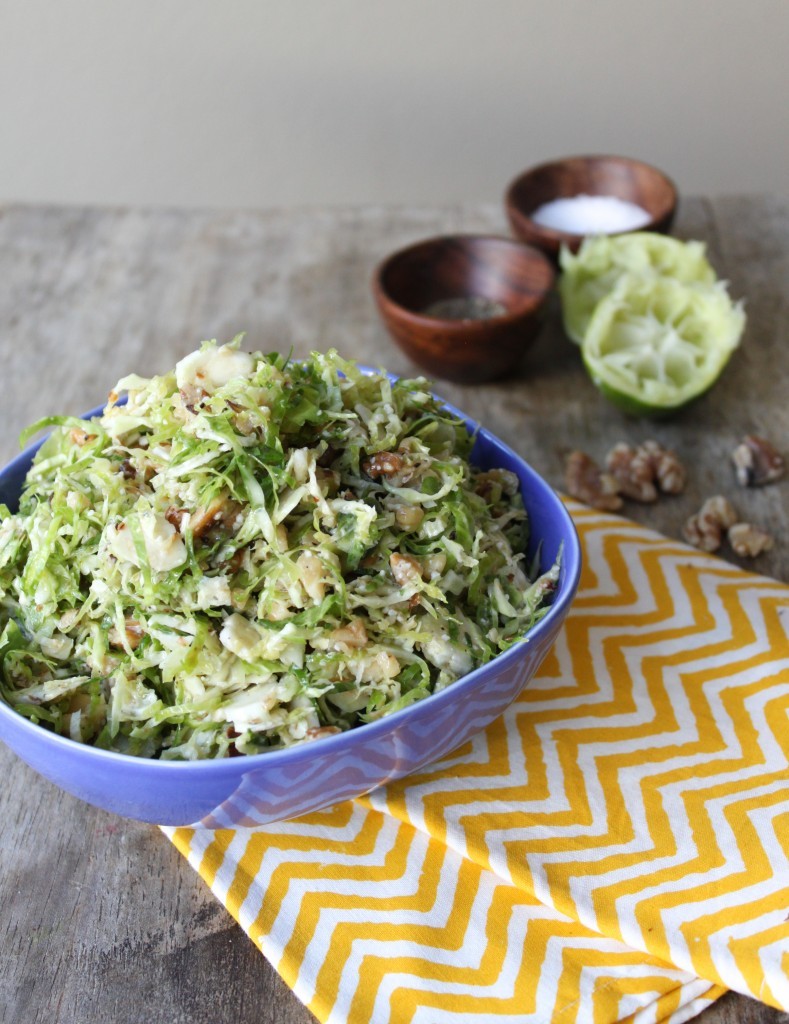 image via: the little epicurean.

*trader joes totally sells brussels sprouts pre-shaved. do yourself a favor and just buy a bag.

ever since i had the lemon-scented brussels sprouts from p.f. changs, i have been dreaming of recreating the dish on my own. the above recipe from the little epicurean looks like it might help me do just that. 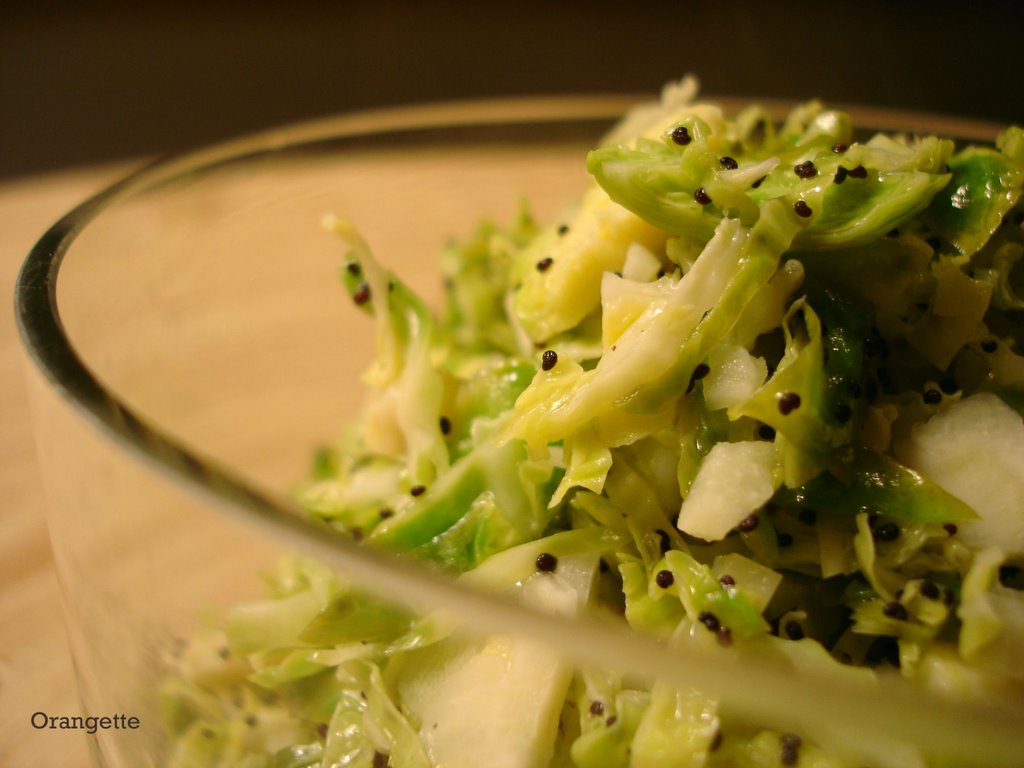 directions:
cut the stems from the brussels sprouts and remove any blemished leaves. when all the sprouts are trimmed, you should be left with about 1 pound total. halve each sprout lengthwise, and slice each half into thin slices, about 1/8 inch thick; or, alternatively, hash them in a food processor fitted with the slicing disc attachment. in a large bowl, toss the hashed brussels sprouts with the lemon juice. in a large skillet or sauté pan, warm the olive oil over high heat, almost to the smoking point. stir in the hashed sprouts, garlic, and poppy seeds. add the wine, and cook for about 3-4 minutes, stirring constantly, until the sprouts are bright green and lightly softened but still barely crunchy. reduce the heat to low, season with salt, and cook for 1 minute more. remove the pan from the heat, and serve.

orangette was one of the first food blogs i ever read. i simply love the way molly talks about food. and then i read her book, a homemade life and fell in love with her even more. i mean, in a totally normal healthy obsession for a complete stranger kind of way. and now i think we’ve gotten a little off-topic. basically this brussels sprouts dish looks/sounds delicious and i can’t wait to make it.

okay, now if you’re not into that whole cooking thing (it’s kind of a drag, i get it), lucky for you, i’ve eaten most of the brussels sprouts dishes around the greater san diego area. here are some establishments whose brussels sprouts are worth the price of admission.

on a recent visit to union, i ordered their brussels sprouts (with bacon!) as a side accompaniment to my ahi entree. clearly the portion size warrants sharing. i mean, clearly. but seeing as i’m not really into that (sharing, that is), i finished them off handily all by myself. also, what’s a portion size?

so chef and restauranteur brian malarkey owns three restaurants in san diego –gabaradine, searsucker, and herringbone, or as he lovingly refers to them as “the social fabric family.” anyway, while each restaurant is unique it is “theme” and locale, there are a few staples that all three restaurants boast on their menus. case in point, their take on brussels sprouts. while i haven’t yet had the brussels from searsucker or herringbone, i have enjoyed gabardine’s fried version served with bacon, walnuts and gorgonzola. and i mean, fry anything and it tends to taste good. add bacon, nuts, and cheese? it’s not even a question anymore.

okay, so these brussels sprouts are so good, they got written up about in locale magazine. actually, to be clear, it was the chef, katherine humphus, that got written up about, but she totally touted her brussels sprouts (made with pancetta, parmesan, and a balsamic reduction) so it’s almost like they as a not-to-miss dish, so they’re basically just as famous. and to be clear, i actually haven’t tasted these bad boys myself but one of my besties L has and tells me that they’re amazing. and well, we share a mutual love for the whole foods hot bar so i trust her opinion whole-heartedly. 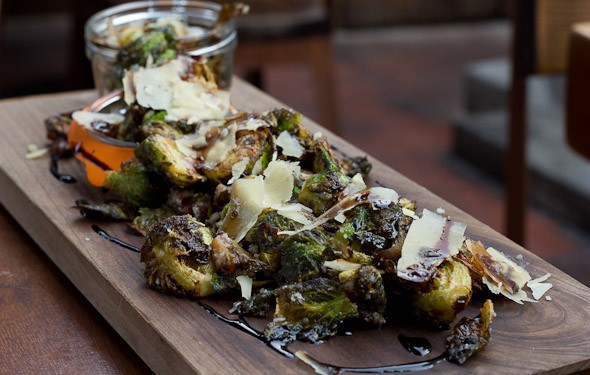 so remember when i used to be an amateur food critic for AskMissA? yeah, me too. so does my stomach (i think she was way happier then). anywho, one of my very first reviews was of a newish eatery called local habit. specializing in organic food and craft beer, the restaurant offers a delicious menu filled with vegetarian, gluten-free and vegan options. one of said options is their cast-iron skillet of brussels sprouts which are roasted with house mustard and chive. they are scrumptious. and i’m not just saying that because they were free. they really are delicious. in fact, i remember fighting my dinner date for the last few sprouts. i mean, he was no match for me. i’ve been fending off sharers my whole life (see commentary above). also, if you’re interested in what other dishes we enjoyed during our visit, you can read my article about local habit here. 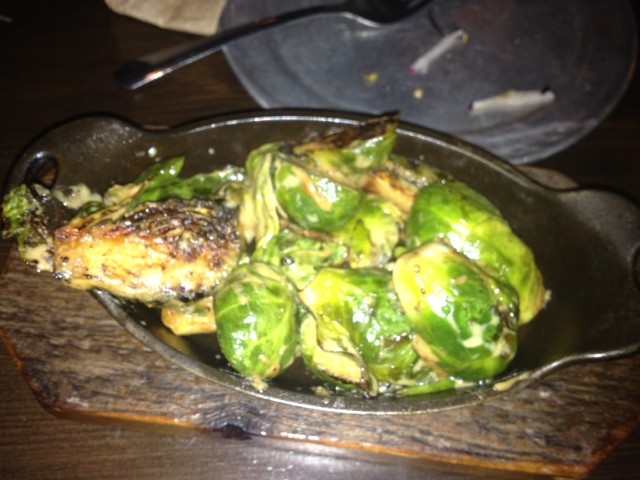 image via: my iphone.

ready for another shameless plug? three, two, so also under my food critic regime was a trip to another of hillcrest’s eateries –uptown tavern off university avenue. their version is served crispy with bacon, roasted garlic vinaigrette, chili flakes (not gonna lie, they’ve gotta kick!) and parmesan reggiano. and i mean, they don’t file them under their “large plates” for nothing. exhibit a: 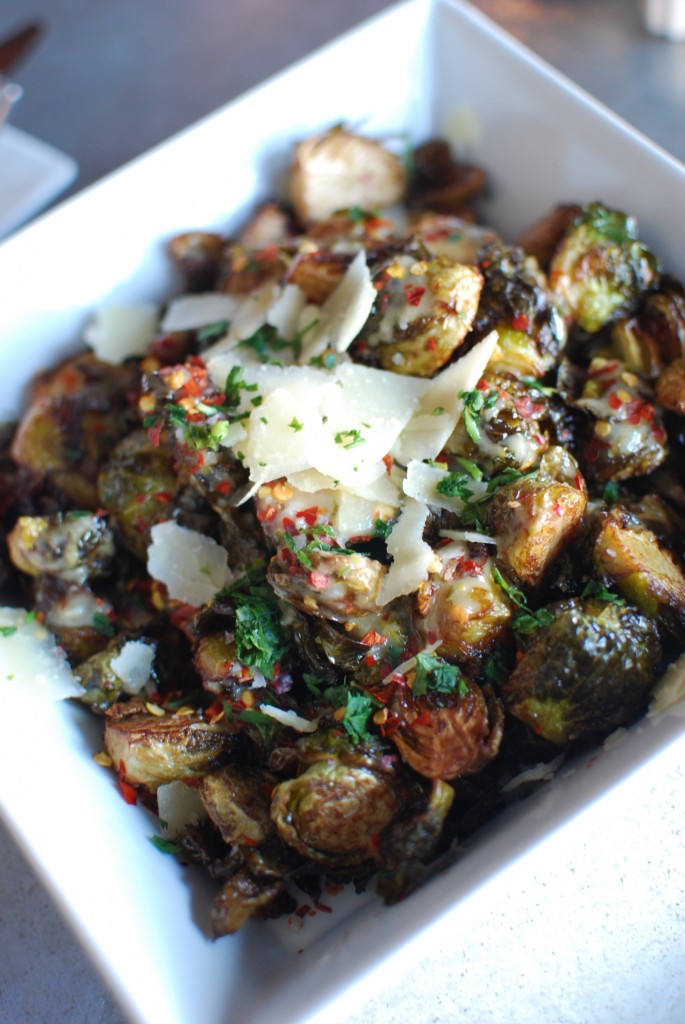 if you think i didn’t try to attempt finishing them off, then you don’t know me at all. but i remember i had recently gone through a break-up and my stomach had shrunk immensely therefore inhibiting my ability to put away enough food for a sumo wrestler. luckily, there are such things as doggy bags. and i enjoyed those delicious sprouts for three more days. also, if you want to read the rest of my review of uptown, go here.

and there you have it, plenty of reasons to be all about the sprout. whether you slave over a stove or pay someone else to slave over a stove and serve it to you in a mason jar, i’m telling you, brussels doesn’t just produce men with muscles, it also produces some really delicious vegetables.