perfect. i knew you would, how could you forget her? anyway, last thursday JP drove up to my neck of the woods to a) show off his new ride, b) take advantage of the yogurtland coupons we had obtained on our previous visit and c) hang out with me because i’m awesome. and humble, clearly.

as we drove to yogurtland, we both agreed that it would be really awesome if lindsey was working that evening. seeing as she was the one who had given us the coupons and also seeing as she was just great in general, our visit only stood to be enhanced by her presence. and as we pulled into the parking lot, we saw her silhouette through the window and immediately broke into action.

“hiiiiiiiii! do you remember us?” we chimed as we walked through the door. upon recognizing us, lindsey broke into a huge smile and nodded ferociously. “of course i do!” she squealed back. we went on to tell her that we had been praying the whole drive there that she would be working and that our night had instantly been made upon the realization that our prayers had indeed been answered. she handed us sample cups as we continued to sing her praises but then more customers walked in so we tried to remember that we were in a public establishment and take our enthusiasm down a scosh.

after sampling double cookies ‘n cream, pumpkin pie, and red velvet, i grabbed a full-sized cup and suicided the aforementioned three flavors, adding in fudge brownie batter and vanilla bean for good measure. a few fresh strawberries and a shake of green & pink-colored sprinkles later and it was off to the register to assess the damage. JP joined me with his own respective creation (i don’t recall the exact combination of flavors but i do know there was a solitary vanilla wafer involved) and lindsey greeted us both with her effervescent smile.

i pulled out two of the three coupons she had gifted us just a dozen days prior and like magic our double-digit total was reduced down to $5.33. i mean, it pays to know people (i think there’s a pun in there somewhere?). as we gawked at how little monies our decadent dessert had cost us, we asked lindsey if she had purchased her ticket to stagecoach since the our last visit. turns out she HAD and she was pumped about it (i would be too, i’ve heard stagecoach is awesome). she also told us that we were her favorite, (which we not only loved, but also reciprocated) and that we looked pretty good in non-wedding-attire, too. good to know seeing as i was in my post barre uniform of lululemon leggings and a fleece jacket and JP, in an undershirt and work pants. so basically this visit was turning out to be the best thing ever.

and as if our time together couldn’t be topped, lindsey told us about the store’s upcoming grand opening event this coming saturday. unfortunately, a review of our schedules revealed that we would both be out-of-town for it (wah wah). as we confessed that we’d be missing out on all of the free stuff/festivities, she handed us even MORE coupons. i mean, lindsey is just the gift that keeps on giving. literally, she just keeps giving us gifts.

anyway, sometimes when i get cut-off on the freeway or someone sends me a nasty email or i have a bad hair day or whatever, i get sad that maybe the world is becoming a dark and terrible place (yes, bad hair days can make you think crazy things). and maybe in some parts it is. but last thursday, at the encinitas location of yogurtland, the world was a happy place. filled with delicious frozen yogurt and lindsey, the sweetest yogurtland employee this side of the mississippi. 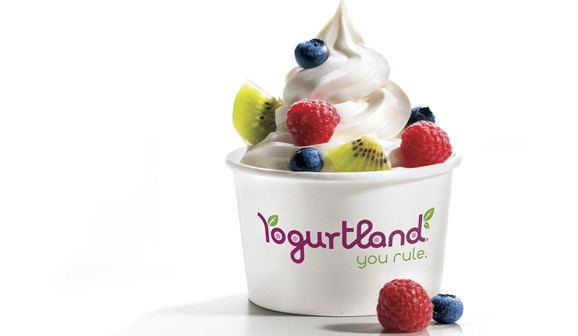 deliciousness in a cup.