i remember the last time i left the country. it was just shy of my 20th birthday. i had switched my major for the umpteenth time (so i was a little indecisive in college, whoops) to spanish and that required me to do a summer abroad. so there i was, in the middle of LAX’s international terminal with two dozen of my fellow spanish-speaking pepperdiners ready to embark on a journey that would ultimately end in madrid, spain (via frankfurt, germany). i remember being nervous, in a “i have no idea what i just signed up for” kind of way. i had been abroad four summers before, but i had been with my parents and they were well-versed in how to quell my travel-induced nerves. this experience abroad would surely look a little different.

i passed time on that flight getting to know the students i would consider family at trip’s end and tried to remind myself when i got scared of what the next two and a half months entailed that this opportunity was not freely extended and that i best make the most of this summer in spain.

fast forward eight and a half years. it’s clear that i’m no longer that timid nineteen-year-old (though a part of her still lives within me). while the idea of traveling alone once scared me, i have logged enough solo air miles over the past two years alone to remedy said fear. in fact, if i may be so bold -i’m really quite proud of how independent i have become in terms of travel. i still may overpack (just slightly) and demand that we get to the airport obnoxiously early, but i have developed a travel ritual of sorts that has all but extinguished the anxiety that once threatened the entire experience. and i think that’s because, well, not to be cliche but practice really does makes perfect. the more familiar something becomes, the less the element of the unknown can scare you. it loses the power it once had over you, and you’re allowed to simply enjoy the adventure for what it is. and you have to believe that traveling with me is always an adventure. duh. 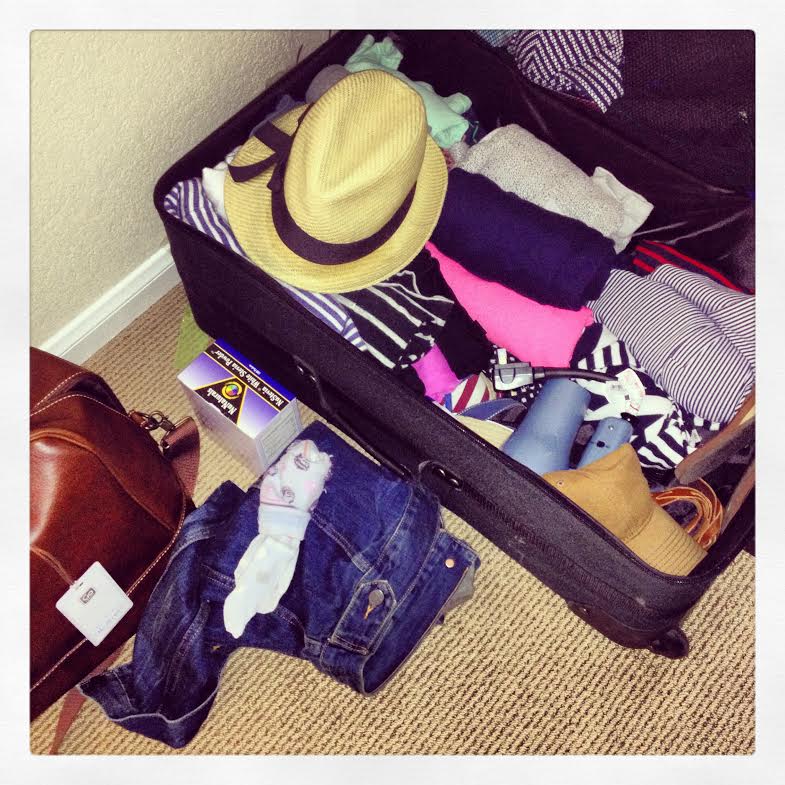 all my bags are packed…

so what does that all mean in relation to the trip that lies before me in seven days’ time? a lot, i think. i think i’m better prepared to take this trip than i may have been even just a year ago. aside from a few minor freak-outs (waiting until october to buy my ticket when i had already decided to take the trip in august), i have approached this specific vacation with a level of calm, cool, and collectedness not normally exuded from my type A/OCD personality. and well, maybe the fact that i have slowly but surely been preparing myself (mind, body, wardrobe and emotions) for these upcoming two weeks for the past five months also has something to do with it, too (procrastinator i am not).

but i think the one rule of thumb i’ve really tried to adopt as my temporary travel philosophy (and maybe just life philosophy in general) is this concept of no expectations. i remember i wrote a post back in august about a quote i found by ray wylie hubbard that said, “and the days that I keep my gratitude higher than my expectations, I have really good days.”

so perhaps what it all boils down to it is to just go into things with the mantra that whatever is going to happen is going to happen. you can sit there and try to expect what is going to come next and how you’ll feel in two weeks or two months or two years. or you can approach the entire situation from a place of gratitude. that regardless of the outcome, you’re thankful for the opportunity, the experience, the moment, however fleeting it may be. (great expectations | august 20th, 2013)

i would be lying if i said i haven’t tried to imagine what will transpire over the course of my time away. what i will see and do and eat and even how M and i will function in such close quarters. but every time i’ve started to build up these expectations, i’ve caught myself. no no, shawna, don’t do this to yourself. don’t write this experience like you would one of your grand stories. let this experience write itself. be present in the moment and take things as they come. and remember, at the end of the day, no matter what happens, you’re in australia. you’re in a country(continent!) that is on the bucket list of many. you have no business letting unmet expectations eclipse the overall experience. so enjoy these two weeks to the fullest. stop and smell roses. soak it all in. take so many photos your camera runs out of memory. do more and think less and smile. you’ve worked so hard this past year, you deserve this. you’ve earned this. don’t waste it away on worry and what ifs.

what once was this obtuse concept -“going to australia” something so far off and intangible, a concept i couldn’t seem to wrap my mind around, even after the tickets were purchased and the passport renewed, is about to transpire in a matter of days. this little dot on my google calendar has felt as though it’s taken an eternity to get here is, well, here.

and i could not be more excited and ready.

get me my vegan meal, my neck pillow, my nook and my no-jet-lag natural chews. let’s do this.